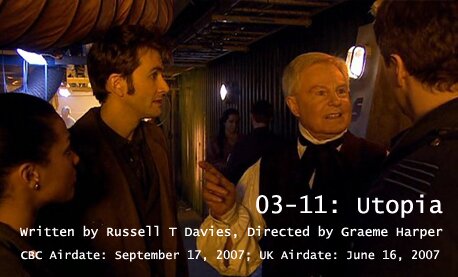 The Big Idea: The TARDIS arrives many trillion years into the future, farther than the Time Lords have ever gone, to find the last humans on an alien planet seeking refuge from vicious gangs of savages with really bad teeth. Meanwhile, a dotty, adorable old Professor tries desperately to make a rocket work so that the last of humanity can safely reach Utopia…

Quick Bits of Trivia: Sir Derek Jacobi has twice before appeared in Doctor Who productions in other media. He plays the voice of the Master in 2003’s The Scream of the Shalka (an animated story webcast on BBCi) and starred in the 2003 Doctor Who Unbound audio Deadline. This is the first time in the show’s history that we get to see the Master regenerate on-screen (the transformation at the end of The Keeper of Traken wasn’t really a proper “regeneration”). John Bell, the young actor who plays the little orphan Creet, won the role through a competition on the BBC children’s series Blue Peter. Captain Jack’s revelation that he cannot die is established in the spin-off series Torchwood (which aired before Series 3 in Britain, but on CBC will air after). Indeed, while not spoiling anything, Jack’s run for the TARDIS directly follows on from the Torchwood finale End of Days

Not to Complain But… we are trillions of years in the future but they are still using trucks, machine guns and wired fences that are being used today…  granted that is nitpicking in the highest degree.

All Things Considered… Utopia completely rocks. With so much attention focused on John Simm appearing as the Master in the season finale (thanks to the UK press spoiling things), nobody knew that this episode was actually part of that season finale, and that Simm was going to appear as the Master in this episode. In fact the leaking of the identity of Simm’s role in the final two episodes created an even bigger shock, as consequently, few suspected that acting legend Sir Derek Jacobi, announced to the press well ahead of time as playing “The Professor” would also turn out to be playing the Master. The surprise that Jacobi was in fact The Master, and the surprise that this episode wasn’t actually a stand-alone story but part of a three-part season finale, ranks amongst the biggest shocks of the new series and one of the greatest in Doctor Who‘s 44 year history.

What is brilliant about the way that this is achieved is that the story starts off, on the face of it, as simply another one of Russell T. Davies looks into humanity’s fate into the far future, featuring more eccentric characters and quasi-humans that we’d seen previous in The End of the World, New Earth and Gridlock. The quest of the last vestiges of humanity to reach Utopia seemed worthy enough of a 45-minute, self-contained story all on its own. By the end of that episode, that expectation is turned on its head and the rug is literally pulled out from under the viewer, as the story turns about to be, at its heart, about something entirely different.

Sir Derek Jacobi is so good in his dual role as The Professor and The Master that is very difficult to imagine anyone else playing this part in this story, or certainly playing it as well. Going from a likeable, eccentric, old-fashioned bumbling character to the epitome of evil within minutes this convincingly is not as easy as it seems, and it is reassuring to know that the production team gave such a meaty role to the first peer of the realm to appear in the series. And in his own way John Simm is equally brilliant — as well as different — in his portrayal of the same character.

The guest cast are not alone in their excellent performances. David Tennant and Freema Agyeman hold their own, and are re-joined by John Barrowman playing the fun, flirty version of Captain Jack that we don’t get to see much of in Torchwood. The chemistry between Barrowman, Agyeman and Tennant is so good that it seems a shame that we won’t get to see that much more of it (as far as we know) in forthcoming years

Graeme Harper’s direction is up to its usual stellar standards, but special mention must be made of Murray Gold’s eerie score, which helps to make the moments leading up to the revelation of Professor Yana being the Master as some of the most tense, uneasy, un-settling yet brilliant incidental music the series has ever featured.

All in all, Utopia battles it out with Human Nature and Blink for the best individual episode of the season. With episodes this good, it doesn’t really matter which one wins.