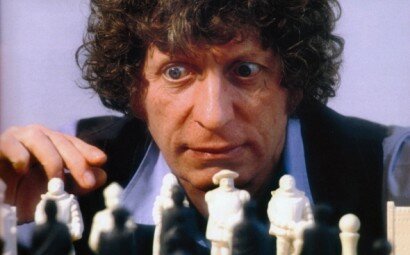 1981 was an extremely eventful year for Doctor Who, even with only 3 new stories (comprising 12 episodes) broadcast in the UK (Warriors’ Gate through Logopolis). Most notably, the longest running Doctor (which is still the case to this day), Tom Baker left after the end of this, his seventh season. Romana and K9 (each having been around a few years in different incarnations)  left a couple of stories before Tom Baker did (although K9 would re-appear on our screens before the end of the year, though not, technically-speaking, in Doctor Who). A new, fifth Doctor, debuted in the closing seconds of Logopolis. It would not be until January 1982 that viewers got to see a substantial performance of Peter Davison in the role, but his debut in 1981 was quite revolutionary and, as it has transpired all these years later, quite influential. The Doctor could now be played by a younger man.

That wasn’t all. With a delay to a new broadcast slot for the next season to weekdays in January 1982, 1981 was the last of 18 consescutive years where Doctor Who was broadcast in Saturdays in the UK - quite remarkable when you think about the show being a tradition and an establishment. In anticipation of the season (and because of the then-unprecedented 9 month gap between seasons), the BBC broadcast a selection of stories from each previous Doctor for a repeat run in the autumn of 1981, entitled “The Five Faces of Doctor Who”. For many younger fans (at least, though younger or about the same age of the programme) this was the first chance to watch stories from Doctor’s other than Tom Baker, or to watch black and white Doctor Who episodes. The repeat run was the first shift in the BBC and those making Doctor Who to start regularly celebrating its past while also making new episodes. The run of five stories showed was An Unearthly Child (and yes, Doctor Who Magazine, that’s what the BBC called as they do now, and not “100,000 B.C.”), The Krotons, The Three Doctors, Carnival of Monsters and the 2nd airing in 1981 of Logopolis. The ratings - with the episodes shown on BBC2 - were excellent for repeats and for something shownn on BBC2. In fact these broadcasts did comparatively better against expectations than the Season 18 episodes did on first airing (including Logopolis, which was a part of both Season 18 and The Five Faces of Doctor Who).

For many fans, the presence of The Krotons as the selected Troughton highlighted (or drew attention to) the fact that so many episodes in the archives were missing - The Krotons was the only complete 4-part Patrick Troughton story in the archives at that time (and there’s only been one more recovered since then). In 1981 Doctor Who Magazine published a list of what was missing from the archives, making the fact that so much of Doctor Who was missing in the archives public knowledge for the first time. The release of this information was a very dramatic event for many Doctor Who fans in 1981. But some fans didn’t accept this news passively - 1981 is also when the yearning for the recovery of missing episodes and the hunting for them began for so many fans, which still happenining even to this day…..

1981 ended with the broadcast of the first ever spin-off of Doctor Who - K9 and Company. Elisabeth Sladen and John Leeson were back, and nobody knew then that this was only to be the first of two spin-offs for Doctor Who that they would play their customary roles in together!

Something else happened in 1981 with Doctor Who which was very eventful for this writer. On October 29th 1981, I watched Doctor Who for the first time! The episode was The Pirate Planet Part 3 on its Thursday repeat (although I didn’t realize it was even being shown on Saturdays, at least for the first few weeks I watched). Hooked by the cliffhanger to that episode of the Doctor falling off the edge of a plank, I had to tune in next week to find out how the Doctor got out of it. And I’ve been hooked ever since…...

To this day, I am grateful for the “Five Faces” repeats because a few years later, as a result of that, I got to see for the first time An Unearthly Child. I was able to get from a friend a copy of a copy of a copy of that story with the BBC2 intro at the start of the episode. At that time, in my area anyway, we were still a few years away from getting pre-Pertwee stories. So at that time, to see that story was this fanboy’s dream come true.