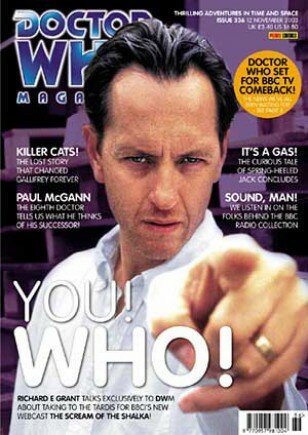 In 2003, the inevitable finally happened. The announcement that Doctor Who fans had all been waiting for came on September 6th 2003 - the announcement that Doctor Who was being brought back as a television series by the BBC. No US network or studio co-production deals to worry about, no contingencies based upon a film happening, and not a webcast with animation. The real deal. It was the best present for the series 40th Anniversary that the fans could have hoped for.

But 2003 had been a glorious year for Doctor Who long before the end of September. The year had begun with the webcast of new animated complete version of Shada with Paul McGann in the role rather than the 4th Doctor. Soon after, an announcement was made that there would be a new 9th Doctor - played by Richard E. Grant - for a fully-animated webcast (done by professional animators Cosgrove Hall) of Scream of the Shalka, a story written by Paul Cornell and meant to provide Doctor Who with a new lease on life. While that was in the works, Big Finish was having a stellar year with some excellent new “regular” releases like Jubilee (later to be the inspiration for the episode which brought the Daleks back to the television series) and also releasing a new series of Doctor Who Unbound audios which explored six different alternate takes on Doctor Who or its mythology, which six different lead actors in the main role - Geoffrey Bayldon, David Warner, David Collings, Michael Jayston, Arabella Weir and Derek Jacobi (three of whom had featured in the classic series, three of whom would feature in the new series) along with guest stars such as Carole Ann Ford, Nicholas Courtney, Nick Briggs and some guy named David Tennant.

The book series was also regularly pumping out releases for all 8 Doctors. DVD releases were becoming more common and featuring more (and better) extras. The final stories to be released on VHS came out in a spectacular “End of the Universe” collection, allowing fans to see many episodes from the 1st 2 Doctors “VIDFired” for the first time (that’s the process invented by Doctor Who fans to make film look like video again). And to celebrate the 40th Anniversary, the BBC did another documentary - The Story of Doctor Who (Mark Gatiss’ pitch to do a docudrama on the origins of the show having been rejected).

But before any of the End of the Universe collection, The Story of Doctor Who or The Scream of the Shalka came out to celebrate the 40th anniversary in November 2003, the biggest event of the year trumped them all on September 26th. Doctor Who was coming back to television. And you just knew that this time, it wasn’t going away again anytime soon.