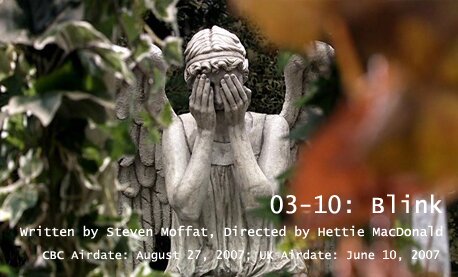 The Big Idea: Sally Sparrow encounters a haunted house which somehow is speaking to her. Her friends disappear mysteriously without trace. The TARDIS is around in the present day, but the Doctor and Martha can only be found as DVD Easter Eggs…

Quick Bits of Trivia: Like Human Nature and The Family of Blood, Blink is an adaptation of a previously published Doctor Who story, this time Steven Moffatt’s 2005 Doctor Who Annual story “What I Did On My Christmas Holidays by Sally Sparrow”. The adaptation is far looser than Human Nature, with only the central concept of the Doctor trapped in the past leaving messages for Sally in the future (and then Sally writing it down completing the circle) retained. The major differences are that in the short story, Sally is 12 years old, and there are no monsters. You can read the original story on the official BBC website.

Blink was the “double banked” story for series three—a story which features a minimal amount of the Doctor and companion as it was being shot at the same time as another story (in this case Human Nature and The Family of Blood). Hettie MacDonald is the first woman to direct an episode of Doctor Who since 1985’s Colin Baker story The Mark of the Rani — a gap of 22 years! Actor Louis Mahoney, who plays the older Lt. Shipton, has appeared in Doctor Who twice before, as a newsreader from the future in Frontier in Space and as Ponti in Planet of Evil.

Not to Complain But… there is no bloody way a hot chick like Sally Sparrow would ever hook up with geeky-DVD boy. Ok, that’s reaching somewhat, but really, there’s not much to complain about! We’re getting spoiled!

All Things Considered… this is arguably the finest episode of the season, and un-doubtedly the cleverest. Once again from the pen of Steven Moffatt (Hugo-Award winning writer for The Empty Child and nominated for last year’s The Girl in the Fireplace), Blink succeeds as a modern day Doctor Who thriller that has more chills and scares in it’s 44 minutes than most feature films in the “thriller” genre could dream of. And it does it without the Doctor playing the lead character in the story, although his presence is felt far more than his actual screen time. People who did not like last year’s “double-banked” episode Love & Monsters due to its lack of screen time for the Doctor and Rose are less likely to dislike Blink for this reason.

It may be the lack of the Doctor’s actual physical presence in most scenes that makes Blink work even more successfully as a scary thriller. Without the Doctor there to help himself or Sally Sparrow and company, the audience fears even more fearful for the fate of a couple of characters we really have come to care for in a relatively short space of time — and in turn the fate of the Doctor and Martha are tied up in this as well, adding to the concern of the viewer. With the Doctor wishing Sally the best of luck, the audience realizes that it is up to Sally to come through on the Doctor’s plan and save the day, without the comforting figure of the Doctor there to help. If next season’s double-banked episode can channel this tension into the viewer once again we will be in for another real treat.

There are two women that especially deserve to be singled out for their efforts on this episode. Hettie McDonald deserves to direct more episodes of the series based on the superb work on display here where the drama is heightened at every turn, helped by Murray Gold’s tension-inducing score. And the undisputable star of the episode is Carey Mulligan as Sally Sparrow. She’s so good that by the end of the episode you are wishing that she climbs on board the TARDIS and stays with the series as the companion for the next 20 years.