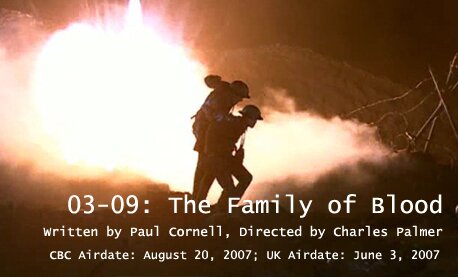 The Big Idea: The school where John Smith teaches is besieged by the Family of Blood and its scarecrow army while Smith has to come to terms with the fact he is, in fact, a Time Lord…

Some Quick Bits of Trivia: This story was produced by Suzie Ligatt, stepping in for the vacationing Phil Collinson. The hymn heard being sung when the children fire on the scarecrows (also heard in Human Nature) is “He Who Would Valiant Be”, which was adapted from the poetry of John Bunyan. As mentioned last week, this two-part story was adapted from Paul Cornell’s 1995 “New Adventures” novel. One of the more interesting changes to the text seen in this particular episode is in the novel, John Smith (reflecting the Scottish accent of the Seventh Doctor played by actor Sylvester McCoy) came from Aberdeen. In spite of being a Scot himself, David Tennant requested that Smith, like his Doctor, retain an English accent and thus Smith was relocated to Nottingham. Incidentally, you can read the http://www.bbc.co.uk/doctorwho/classic/ebooks/human_nature/_>novel online on the official BBC website.

Not to Complain But… The Family’s ability to follow scents seem to come and go at will; they can follow Smith and Tim to the school but not to the cottage (Tim at least may be able to elude them using residual insight from the watch). And you would think the Family would notice when “Smith” is “accidentally” knocking all their controls into overload (actually we’re not going to complain too loudly about this; it’s a very Doctorish thing to do!)

You would think therefore this is a story where the Doctor would learn how to be the Doctor when what makes him a Time Lord is taken away from him. But The Family of Blood is not interested in that question at all. What interests writer Paul Cornell is the ordinary courage that scared, frail, ordinary human beings can muster in the face of monstrous evil only the Doctor. Martha, the Headmaster, Joan, Tim, even Hutchison, all demonstrate moments of real bravery.

Smith, on the other hand, does not. Martha even tells him “you’re rubbish as a human”. His response to the impending threat of the Family is about as un-Doctorly as you can get: he unquestioningly accepts the jingoism around him and arms children to fight his battle for him. But for all his dithering and anguish, Smith does alright in the end. Indeed he does the most heroic thing any one man can do: he sacrifices himself.

To make that sacrifice real and truly meaningful, Cornell and company do two things. The first is to show us what Smith will have to give up. The sequence where Joan and Smith see all that could happen is more than just shock material for the scenes from next week; it’s there to show us the life the Doctor could never have and that Smith wants and must abandon to become a lonely alien who doesn’t even think that a man might fall in love. The second thing is to show us what comes next: the scene with the Doctor and Joan is truly heartbreaking as we now experience the absence of Smith. Gone is the absent-minded, dotty but loveable teacher; in his wake is an alien who doesn’t fully comprehend what Joan is grieving the loss of ultimately.

In order for this to work you have to believe in Smith and in the relationship with Joan. David Tennant and Jessica Hynes make you believe. If you only know Hynes work (as Jessica Stephenson) in comedies like Spaced, her performance as Joan is an absolute revelation. Hynes understands the desperation at the heart of someone considered in that era an “off-the-shelf” widow/spinster. The way Joan aggressively pursues, even connives her way into, Smith’s affections, you understand that this is a woman who wants something better, who sees that the world is a bigger place and senses a kindred spirit in Smith (or the Doctor within Smith perhaps). Hynes balances that with an appropriately Edwardian cut-glass resoluteness. It’s a very difficult role because Hynes is playing a character of a particular time and place and yet you have to feel for her and her plight. Hynes does this exceptionally well: the scene where she forces Smith to see the truth of his cowardice is extraordinary.

And of course David Tennant is sensational. Having seen him play the confident Time Lord for a season and a half, it’s bizarre seeing him play an ordinary man completely out of his depth. The scene where he briefly flashes into the Doctor’s character is delightful and only serves to show what a completely different character he’s playing and how beautifully he’s doing it.

It’s a clich� to say “Doctor Who has come of age”. It’s been said so many times before of stories where Doctor Who deals with broader themes that make it seem different than what’s gone before. (It was even said of Human Nature the book when it was published in 1995!). And yet, with Human Nature and The Family of Blood this is precisely how it feels. Brilliant stories like Fathers Day and The Girl in the Fireplace and Army of Ghosts / Doomsday showed us how powerful Doctor Who can be when it uses real emotions. With Human Nature we can see that was just the series flexing its muscles before something incredible like this.

Line of the Week: “Falling in love—that didn’t occur to him? What sort of man is that!?”