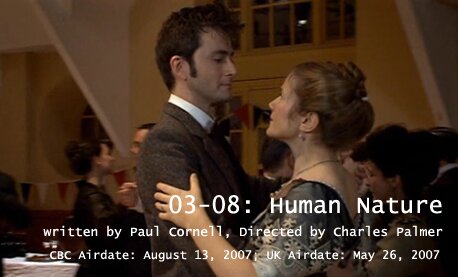 The Big Idea: In order to avoid detection by an alien species known only as “The Family”, the Doctor becomes human and lives life as a schoolteacher named John Smith in 1913. But the Family is closing in, and the means for Smith to change back to the Doctor has been stolen…

Some Quick Bits of Trivia: Human Nature is an adaptation of Paul Cornell’s 1995 Doctor Who “New Adventures” novel. The New Adventures were a range of novels produced by Virgin Publishing from 1991 to 1996 during the 15 year gap between the classic and new series, predominately featuring the Seventh Doctor (portrayed on television by Sylvester McCoy). In the novel, the Doctor visits alien bodysmiths to be turned into a human in order to better empathize with the grief his companion Bernice Summerfield is experiencing. The televised episode adapts the broader story beats of the novel (the Doctor becomes human John Smith in a pre-World War I school where he falls in love with Joan while aliens seek to possess the Doctor’s abilities as a Time Lord but Tim has stolen the means for Smith to change back), while changing the Doctor’s motivation for changing (as an emergency measure) and simplifying the threat carried out by the villains. Oh, and the device to change the Doctor back was a cricket ball.

In terms of period trivia, in pre-suffrage days women did indeed have to drink outside public houses, even in November! Joan’s husband died in the battle of Spion Kop, a disastrous battle during the Second Boer War (1899-1902) which left 200 dead and over 1000 wounded.

Not to Complain But… wouldn’t it have made more sense to have actually had Martha hold onto the watch instead of leaving it around where it could be easily detected by the family or, as the case was, stolen? And for all the period detail, couldn’t they have gotten what was in 1913 Britain almost certainly the correct method of displaying dates (day, month, year) on the posters and newspapers?

All Things Considered… Wow. Paul Cornell’s solution to adapting Human Nature to television is elegant in its simplicity and brilliant in its courage: just get on with it. Start with the Doctor as a human being teaching in a school and just go from there. This story is glorious to watch as it sets up the situation, then darts back to show us the missing pieces that fill in the action, and then picks up more and more as it goes to build it all to an emotional peak.

And that’s just the structure of the story. The genius of Human Nature, the television episode, is that it takes this high-octane approach and then grafts onto it characters that are totally compelling, played by actors at the height of their powers.

Watching the romance between Smith and Joan unfold is beautiful. Joan both connives her way into getting a date and yet shows profound vulnerability at the remembrance of her husband dying in Spion Kop. Smith is hesitant and yet gains confidence the more he interacts with Joan. The two perform a beautiful dance (both figuratively and literally in the episode), around which we have the stories of Martha, Tim and the Family circling them.

How all this ends, we will see next week. In the meantime, let’s marvel at how beautiful it all is right now.

Line of the Week: “Would you like me to put some gravy in the pot? And some mutton?”