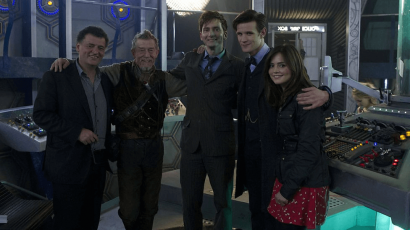 As we wait for the news of the next episodes to be made, it seems a good time to reflect back on the history of the now-53 year-old television phenomenon, Doctor Who. In particular, it seemed an ideal opportunity to lay to rest several fan theories which had been repeated and gained wide enough acceptance over the years that people began to accept such theories as historical fact and part of fan “received wisdom”, despite seemingly having no factual basis to support these theories. The passage of time (and in some cases, new information that has come to light about the show’s past) has helped to consign these theories into the realm of fan myths that hopefully have died once and for all. One just hopes that one isn’t resurrecting them by writing about them now. In any event, here is the first of five such fan theories that we’ll try to put to bed over the next five weeks.

The first of these I’d like to tackle is the often-cited view that the classic series was “killed” by continuity usage, a theory seems to stem from the belief that a continuing series making some reference previous episodes is an inherently bad thing which will lead audience to confusion and dis-satisfaction. Which is something that I will agree is conceivable - but something being conceivable and something actually being the case are not the same thing. Not even remotely. There has never been an shred of evidence put forward to back up this assertion, other than fans pointing to the decline in ratings which occurred after the 18-month hiatus and then coming up with their own unsupported theories as to why the ratings decline happened. The actual audience research conducted by the BBC and by BARB at the time points to other factors for audience displeasure which are far more common reasons. Of Doctor Who‘s final few seasons, the one that got the most negative response from the audience was Season 24 (ironically for those foisting the anti-continuity argument, since it is probably the least continuity-heavy season of the last four of the classic series). When asked what they disliked the most about the season, the audience research indicated that they didn’t like the performances or the characterization of the regular cast, nor did they like the stories themselves or the “increasingly silly” tone. There was not a word to be mentioned about the re-use of the Rani or Sabalom Glitz.

If there’s an argument to be made purely from the ratings, the last two times the Daleks and Cybermen were featured in the classic series, the episodes they were featured in garnered some of the highest ratings for the particular seasons in question (Season’s 22 and 25, respectively) - which doesn’t exactly fit in easily with the “continuity killed the ratings” theory.

There is the view that poorly-explained continuity could confuse the “casual viewer” and cause them to switch off. That’s an acceptable and believable theory, but one that doesn’t have much in the way of evidence to support that this was the case with Doctor Who. One might argue that one such example of poorly-explained continuity usage was the unexplained references to the Cybermen in the climactic moment of The Curse of Fenric (something that a fan would get but the casual audience who would have heard of the Cybermen would not have understood) - except the ratings were already pretty low that season by the time you got to its 4th last episode, suggesting that something else had already caused the audience to not tune in. However the bigger problem with this theory today is that the new series has arguably had the clearest examples extremely-heavy continuity-based episodes which didn’t bother to explain the continuity references properly - or at all - to the audience, and yet the lack of explanation didn’t cause the slightest dent in the ratings in the grand scheme of things. For example, Journey’s End features appearances from characters from other television series altogether (spin-offs that were seen by a fraction of the audience that Doctor Who was getting at the time) without much in the way of a proper introduction (or in the case of K9, an explanation of why he suddenly appears out of thin air to help save the day). Another good example is The Time of the Doctor, which spends a great deal of time wrapping up about a thousand continuity questions built up over the course of the Matt Smith-era, questions that the casual viewers for a Christmas Day episode would have no knowledge of in the first place. I know this one from personal experience, having watched Matt Smith’s finale with two family members who had only seen a handful of Matt Smith episodes and confessed to me as the episode went on that they hadn’t a clue as to what was happening on the screen and why. People often like to discuss what would be a good story to introduce the series to a new viewer - I would suggest those two episodes would be among the worst stories you could show as a means of introduction, unless you’d like to spend four hours explaining things ahead of time. And yet on both occasions, the ratings for the episode and the episodes which followed were extremely high, suggesting that heavy continuity-usage without explanation didn’t turn off any significant number of viewers (if it turned anybody off at all). So maybe it is possible for unexplained continuity references to kill the popularity of a sci-fi tv series, but if there’s no evidence of this happening in the classic series and the worst offenders from the new series haven’t caused the desertion of the audience either, it makes the contention difficult to take seriously.

It wasn’t just the classic series that has had this claim made against it. The 1996 TV Movie starring Paul McGann also frequently has had this charge leveled at it. “Continuity….. killed Doctor Who in 1989, and it was a desperate shame to see the same infections do it again in ‘96” is a typical contemporary quote (this one from a former Doctor Who Magazine editor in a fanzine interview from 1997). It has always been mystifying to me that people put the lack of further episodes stemming from the TV movie to anything other the lack of the miraculously-high audience tuning into the US broadcast to begin with. The US ratings indicated that those who tuned in stayed tuned in for the two hours - if there was a decline in the US ratings over the gradual course of the TV Movie, then perhaps a theory could be supported - but there was no such decline. The view that the continuity references confused US viewers and caused them to switch off is not based on anything factual. And without further episodes broadcast in either the US or the UK (where the TV Movie, rather than “killing” the franchise, proved that Doctor Who could once again be a mainstream hit), it is really impossible to say either way whether the continuity references in the TV Movie would have put off anyone tuning in to future episodes. The audience research done in the UK (none is known to exist by Fox in the US) certainly suggests that the UK audience enjoyed what they saw (references to the Daleks and the Time Lords and all) - and thus would be more likely than not to tune in again. It also seems far more likely that the TV Movie could have been a complete re-boot with no past continuity references whatsoever, nor a regeneration, and still not garnered the miraculously-high ratings needed to convince FOX to continue with the expense and continued protracted-hassle of more TV movie co-productions with the BBC.

That is purely a theory on my part, but unlike those who have claimed that continuity killed the TV Movie and/or the Classic series, I am at least acknowledging it as such.

<< Head of the Class

Continuity might not have killed the 1996 episode, but it’s structure was not helpful.

You’re absolutely right that the ratings were easily the biggest problem.  But… they weren’t off deck compared to other shows that FOX did continue to make.  And you could make the argument that the co-deal with the BBC would balance the extra budget a sci-fi series needed.

Let’s say for argument sake that FOX considered taking it to series.  What then would be the next factor?  Critical and audience reception.  And critically, it was not great.  My local paper said it was “a joy for fans, hell on earth for anyone else.”

Continuity was not the only problem with the episode, but structuring a pilot around a lead character who is only himself for 40min of two hours, was not a great idea.  I would argue that dropping the upfront continuity (McCoy, regeneration, and the overlong recovery from the regeneration) would have helped to correct the critical drubbing.

That said, there were worse plot and program problems then the continuity.  So I agree with you that it’s not a single pointer to continuity having killed it.

I don’t disagree with the premise, but I don’t think comparing Classic Series viewing habits with New Series ones is helpful, because the WAY we consume television is wildly different than it was in the ‘80s. If someone stumbles onto an episode of New Series 7 and is intrigued by what she sees, Series 1-6 are probably readily available to get as caught up as she’d like. At the very least, if someone heard a reference that seemed imporant but wasn’t crystal clear, Wikipedia and the Internet at large can clear up questions while she’s watching the episode.

In contrast, if someone caught the first episode of Trial of a Time Lord and was intrigued enough to want to know more, what were the options? There was no On Demand, no blog recaps at one’s fingertips, no season set DVDs, nothing. (Heck, there STILL aren’t season sets for Classic Who.) At best, there were recap compendiums one could buy, and novelizations… and it seems unfair to say, “Did you enjoy this episode? Well, then, just read 127 novels, and you’ll be mostly up to speed!”

Like I said, I don’t disagree with the hypothesis—I agree that other factors likely played a bigger role in killing Who—but I don’t think it’s helpful to compare Classic to New to make the argument.