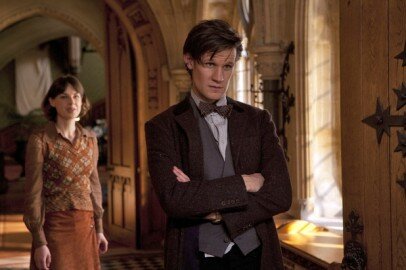 Just like Emma Grayling and Professor Palmer did in this episode, don’t hide your thoughts and feelings - let us know what you thought about Hide, episode 4 of the current season of Doctor Who. Whether it is your feelings about the plot, the script, the TARDIS & Clara, the on-going story arc, the continuity references to the Eye of Harmony (pronounced traditionally) and Metebelis Three (pronounced, erm…...differently), the comments section is your friend.

Over the last few years, some DVD releases have featured ‘enhanced’ special effects over those featured in the original broadcast. I have mixed feelings about those changes.

However, I would be much happier if, when the DVD of this episode is released the name of That Planet is overdubbed.

I am shocked that ueber-fan Moffatt didn’t catch that one. Surely he must have seen “The Green Death” or “Planet of the Spiders” at least once.

Well I thought that was a corker! Somewhat apprehensive as The Rings of Akhenaten is flied next to Fear Her and The Victory of the Daleks on my ho-hum index, and then the writer comes up with this!  Ambitious – a ghost story, love story, sci-fi story and unexpected alien love story all packed into 45 minutes.  Great development and acting for the two main guest leads if a bit more perfunctory for the other two named characters.  Great direction, visuals and atmosphere and Clara is finally starting to work for me.  In particular I really liked the catty exchange between her and TARDIS.  Although that does lead you to wonder what the TARDIS’ issue is.  Emma assures us that Clara is just a normal girl (although strangely none of the normal girls I met at her age were much like that; must be me), and jealousy doesn’t seem likely.  If the TARDIS is jealous of Clara Lord knows what she made of Rose and Martha and then for River – the child of the TARDIS – it doesn’t bear too much musing over.

I know there has been plenty of cyberspacial carping about this run.  And I agree that it doesn’t feel as emotionally polished as earlier series.  But I wonder if that is the result of the largely standalone episodes trying to stand up to the weight of expectation for the 50th, the sense of dislocation from being Pond-less, and the muting of the arcs.  I really liked the way Nu-Who used the arcs to give each series a loose sense of context and direction.  This half has a bit of that with Clara, but it’s struggling for space alongside considerations of the Doctor’s name, Trenzalore, the fall of the eleventh and the fact of whose back for the 50th!  Viewed objectively it’s chalking up episodes that will stand up as more than above average.

I’d be interested in what people’s Fantasy-Who Series would be; the 13 best episodes to date plus a bonus ball for the Christmas Special?  Mine are below – but not in order, I’d have to think much longer over that!:

1.  Rose – I defy anybody not to include the toe of the re-boot!
2.  Blink – I’m as conventional as the next man
3.  Dalek – best re-introduction
4.  Utopia – never saw that coming!
5.  Midnight – has Lesley Sharpe ever done anything that isn’t excellent?
6.  The Eleventh Hour – the re-boot, re-booted
7.  The Time of Angels / Flesh and Stone – the modern classic
8.  Vincent and the Doctor – I have now forgiven Richard Curtis for Love Actually
9.  The Angels take Manhattan – the great, definitive, send-off
10.  The Doctor’s Wife – to date the ultimate fan-fest
11.  The Unicorn and the Wasp – comedy gold
12.  The Empty Child / The Doctor Dances – Mr. Moffat lays out his stall
13.  Bad Wolf / The Parting of the Ways – to date the best finale.
14.  The Christmas Special - The Snowmen

Doh! I know - Rings of Akhaten!

I really have to give this one a second viewing but so far my verdict is leaning towards a thumbs down. (Hope I’m not breaking a copyright) It had its spooky moments, which I was hoping for but I didn’t like (or perhaps didn’t understand, but I still don’t like) how the TARDIS and Clara were able to help the Doctor in the end. So if the TARDIS can fly on its own and rescue the Doctor then why aren’t Doctor Who episodes only 15 minutes long? However it was late when I got around to watching it and I was tired, so maybe after I catch up on some sleep I’ll give it another try.

Totally agree with you. I usually don’t blog, but this is bugging me, and I really need to vent about it, because to me the principal problem with a lot of the latest Who episodes is that they make no sense.

Even going back as far as “The Snowmen,” there’s been a lot of questionable logic. The snowman turned tears because there were a lot of snowmen where Clara died, and people were crying, and…the snow reflects? I guess it works, but it’s a little thin. The whole memory worm thing would have worked as a better ending, as it would have fit with the logic that was already established in the episode.

Then there’s the ending to Rings of Akhenaten which, as I’m sure many people have pointed out, made no sense whatsoever: did that monster want to kill that girl or eat her memories? If it did want to eat her memories, why was that a bad thing? It ate the Doctors memories, and he was fine. Why was that leaf full of lives unlived? Just because Clara’s parents died, it doesn’t mean their lives were unlived, it just means their lives ended. With death. As every life does. Also, why would a memory eating monster eat a leaf? It would have made more sense to find out that that thing was just allergic to leaves.

And, as you mentioned Doug, the TARDIS shouldn’t be able to fly itself as it did in “Hide”. It also shouldn’t be able to think and reason out loud like it did in this episode; in “Let’s Kill Hitler,” the hologram was only able to speak like a computer program, dispensing nothing but cold information (except when it says “Fish Fingers and Custard,” which is intentionally done off-screen so that we’re not sure if it was real or a hallucination from a poison ridden Doctor). Having a TARDIS that can think, speak and move on its own essentially makes the events of “The Doctors Wife” moot. Also, why didn’t the TARDIS run out of power and die like it said it would? No explanation was given.

I know I’m nitpicking, and overall I’ve actually enjoyed most of the episodes I’ve mentioned above, but sticking to the pre-established rules is important with something as big as time travel. If you don’t follow the limitations you set up for yourself, every episode will lead the audience to ask, “Why didn’t they just do [BLANK] like they did in that other episode?”

…Or am I just being a hypercritical jackass? Someone please let me know.

So I’ve just finished re-watching this episode and hopefully my thoughts might provide some explanations.

First, the Tardis has acted/flown on it’s own before - mostly referenced in the Doctor’s Wife when she mentioned that she always took the Doctor where he needed to go and in a few other examples the Tardis flew according to set programming by the Doctor and in the end of The Doctor’s Wife, a switch is flipped on its own which I assume was the Tardis’ doing. So there is some autonomy - I haven’t finished watching the originals (I’m a 2005 convert so that’s all I have to work with) but my understanding is that a Tardis is grown therefore suggesting a living presence which would further the idea of some autonomy.

Finally - and complete speculation - The Tardis runs on rift energy or tears in the space-time continuum. Clara has died twice before. The Tardis only goes to the pocket universe after the wormhole is opened and Clara entered the Tardis. Is it possible there Clara has some link or is a product of a rift? Which would mean that the Tardis could in theory use her as a power source to enter the pocket universe for an extended period of time - much like using a battery.

I’m struggling with some of the same issues this season as PJ and Doug. I’m not sure how much I liked any of the new episodes. (They all need a second watch first). But I’m missing a real emotional connection here. Clara is such an interesting companion, but she lacks depth for me. I usually LOVE little teases about backstory (RIVER!), but it I don’t find the teases for Clara very compelling - it doesn’t leave me looking for spoilers or previews.

I really think Clara is suffering from:

a) The splitting of her character over 3 personas (it might be a clever plot point, but the emotional connection to the character is diluted).

b) The weakness of the storytelling in The Rings of Akhaten. You can see where, structurally, we’re supposed to bond with her here, but the story is all over-the-place.

c) The loss of a meaty 2-parter (as opposed to the fluffy 2-parter). Or even an extended episode like The Eleventh Hour.  Again, The Snowmen would have fit this need nicely, but technically it’s not the same character (at least with the same memories).

Perhaps the 3 personas will be integrated at some point in the future, but it’s asking a lot from the audience. Feels like there are one too many balls in the air.

That was completely awesome from beginning to end.

It was terrific. The scenes in the pocket universe were especially creepy.  I liked the fact that the bent man was never fully revealed.

As for Clara, I can take her or leave her.  I am not that invested in the mystery surrounding her yet.  I like Jenna Louise Coleman’s performance, but feel that the character’s development is being pushed.  Perhaps she isn’t expected to last all that long so the writers are agressively setting up her arch / mystery so that all can be revealed in the last episode of the season.  (But if this is the case, will she remain interesting enough to be around for season 8?)

I may also be coming down with companion backstory / cosmic destiny fatigue.

Will DOCTOR WHO remain interesting enough to be around for season 8?

With nonsensical episodes like The SNOWMEN and The RINGS OF AKHATEN and THE ANGELS TAKE MANHATTAN (sorry but the Statue of Liberty is not made of rock…nor is she an angel for that matter), season 8 is gonna be a tough sell…unless, of course, the 50th special blows the socks off of everyone.