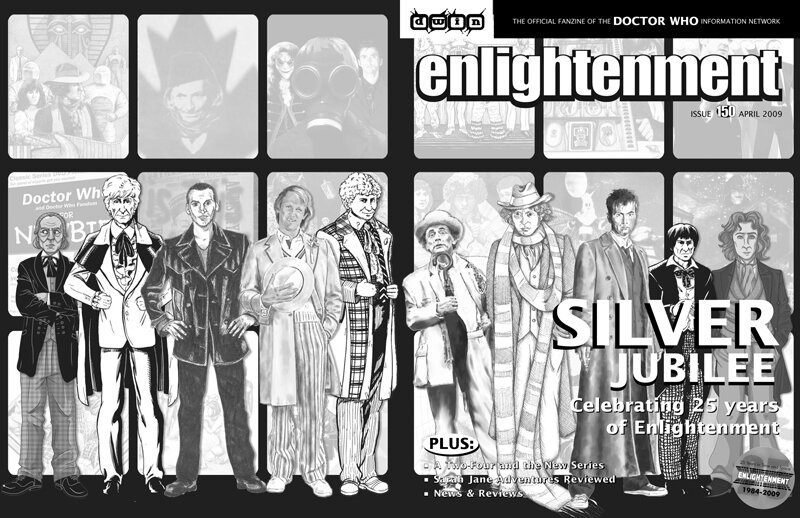 From The Vortex
Graeme Burk kicks off the 25th anniversary of Enlightenment and its 150th issue with some announcements
WhoLine
David Tennant begins work on his final specials
Beige Planet Lance
Lance Parkin talks about why he likes writing for Enlightenment
Wheezings & Groanings
Scott Clarke on the process of writing a column for Enlightenment
The Sarah Jane Adventures
Jason A. Miller and Gian-Luca Di Rocco review series two
Love & Monsters
Deborah Stanish gives an ode to those still writing their thoughts in print
Enlightenment 150
WhoLine scribe Gian-Luca Di Rocco gives a history of rumours about Doctor Who over the past 25 years
A Two-Four And…
An old favourite returns as the crew get drunk while watching the opening two-part story of every season of the new series
The Land of Fiction
Graeme Burk upsizes his intake of Doctor Who with the The Complete Fourth Series on DVD. Plus: reviews of Masters of War, Forty-Five, The Raincloud Man, Return of the Krotons,The Story of Martha, Beautiful Chaos, The Eyeless and The Trial of a Time Lord on DVD
Fluid Links
Robert Smith catalogues his experiences writing for Enlightenment
Temporal Blatherings
Former columnist James Bow comes back and reminisces about the early days of Enlightenment