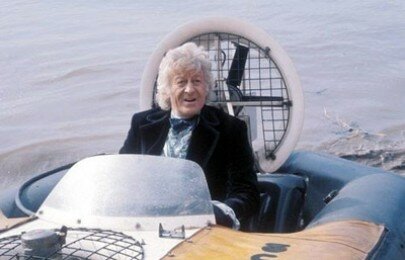 1974 was the end of an era for Doctor Who. Jon Pertwee, Barry Letts and Terrance Dicks all left their respective roles in making Doctor Who after a 5 year run (for Dicks, it was actually 6 years as he became script editor for Patrick Troughton’s final season).  Richard Franklin would also leave the series in Pertwee’s final story, Planet of the Spiders, leaving the UNIT team back down to the two members that had pre-dated the Pertwee era, the Brigadier and Benton (though in a neat bit of continuity, Harry Sullivan is referenced in Planet of the Spiders before making his debut along with Tom Baker in Robot on December 28th of this year). It was the first year with no Master stories since 1970.

At the time this must have been quite the change - Pertwee’s five year run had been the longest to date and many of the younger viewers would only have known about earlier Doctors from having seen The Three Doctors. And the new guy coming in was so much younger than the Doctor typically was (a marked change from today with the likes of Tennant & Smith in the role) and also largely an unknown entity.

In some ways, this year was also the end of the sixties - the sixties counter-cultural movement that is. Not just in Doctor Who of course, which was mirroring what was happening in the real world, even if unintentionally. Once Barry Letts and Terrance Dicks left, the stories no longer featured hippy characters or remained concerned with environmental issues, featured meditation, counter-cultural fashions and other aspects that were of interest to or symbolic of the 60’s counter-culture as a whole. In the UK there were a gradual fizzing out of the 60’s counter-culture in the mid-70’s which was to end with the birth of the punk movement in late 1976 - at which point Doctor Who (thankfully) ignored what was happening in the real world. It is an interesting contrast in that by watching Doctor Who, you can’t help but notice that the 60’s counter-culture happened, but you’d never know there was a punk movement in the late 70’s.

By the end of the year, Tom Baker starred in his first episode as the Doctor. The Doctor Who world (and arguably, the world itself) was never the same again, and, quite amazingly, things only got better for the franchise’s fortunes as it headed into its 12th season on the air….......

Its been a bit sad dropping by this site and seeing so little commentary in response to all the work being done to bring a chronology of Doctor Who through ever week.  And then I thought…well you keep on dropping by and not adding anything, why not add a bit of whittering to the site; it may not amount to much, but is better than silence.  So, any way – 1974 is one of my favorite years for Doctor Who and the reason is this was the year I first started to watch.  And from the first – Planet of the Spiders – I was captivated.  As a little lad in short trousers and experienced in watching the Blue Peter approach to model-manufacture, I could overlook the somewhat basic nature of the metebelis three spiders; I could just sit there, horrified by their size, voices and ability to ride on your back.  The attraction never really waivered, intense through the Tom Baker years, somewhat more doubtful through the 80s when the passage of time seemed to be catching up with the Time Lords, a little bemused by the Movie – like watching Doctor Who while drunk – and then fantastically refreshed with the magnificent re-boot.  And so on to the 50th. Cultural icons that go through life with you have a special importance; 40-years on I’m still watching Bruce Forsyth bookend the Doctor Who slot on BBC1 – the ability to provide continuity from childhood to well-established middle age, is fantastic, our own form of time travel.  So, I’m really looking forward to the next few weeks on DWIN as it takes me back into my memories of Doctor Who, my childhood and a wonderful cultural icon.

These posts are awesome.

Keep up the great work, Luca! Obviously, a labour of love!

Suggesting that the series no longer favoured counterculture or the hippies after the departure of the Pertwee/Letts/Dicks team ignores the fact that the Third Doctor is a consummate Tory, wno knows his wines, hobnobs with bureaucrats offscreen and continually insults Jo Grant.
In the first serial of Season 12 he is replaced by a long-haired scruff and the bad guys for the week are a bunch of mysogynist nerds.  Sarah Jane calls the Brigadier a swinger, and within a couple more weeks we face the most anti-war plot of the show’s history.
I would prefer not to try to cherry-pick hippie references from the other early Baker stories, because it would look pretty staged if I did, but the contrast is more accentuated when you considered how orthodox Pertwee’s final stories were. The only insane politician in Season 11 is in the Malcolm Hulke story… even the Chancellor of Peladon eventually comes together with the working class against their common enemy, and the later Pertwee Dalek stories hammer home the notion that suicide bombing is an appropriate tactic against Daleks.  The Third Doctor’s mea culpa at the end of ‘Planet of the Spiders’ may be that despite all the Buddhist nonsense, he’s been blinded by his stuffy nature to the side of his personality that is about to come forward.

A well-written punk story in the late Seventies would have been wonderful.  Maybe if the writers didn’t really understand how it could be done… stories like the Sunmakers or a number of others could have dealt more with that part of the culture, but didn’t.  Was the first attempt at a punk story not until Paradise Towers or later?

City of the Damned in Doctor Who Weekly, punk story sorted?