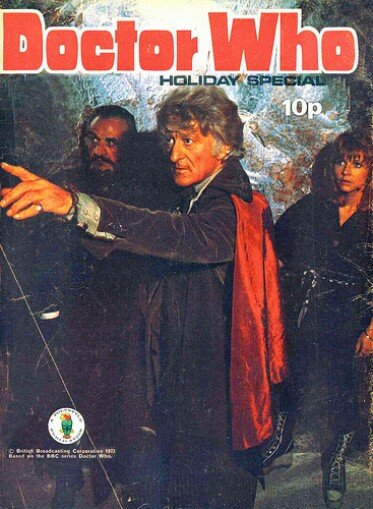 1973 was Doctor Who‘s first big celebratory year.  10 years - an incredible accomplishment for a television series, and even moreso for a science-fiction series. The show began the year celebrating with a special story The Three Doctors, the first multi-Doctor story ever, and concluded the year with numerous special publications and BBC programmes looking back over the show’s decade on television.  Incredible to think then that its first big celebration year was now 40 years ago and “only” covers the first 10 years of the series.

Sadly it would be the last time that William Hartnell would appear not just in Doctor Who, but appear in any sort of acting role. He would die just a couple of years later from the illness that, one way or another, had forced him out of the role to begin with. This year would also feature the last appearance of Roger Delgado as the Master, tragically killed in a single-car accident when filming a movie in Turkey. Delgado’s death would spark the departure of many more of the regular cast and crew and eventually bring the Pertwee “family” era to an end the following year. Katy Manning would also appear in Doctor Who for the last time (to date, not counting audios and tv spin-offs) this year.

But it wasn’t all sad departures - this year also saw the debut of one Elisabeth Sladen as Sarah Jane Smith, a role that she would play on and off until the actress herself passing away in 2011. Other than (arguably) K9, Sarah Jane Smith would become the most well-known and popular of all of the Doctor’s companions, helped in part by her original run as the Doctor’s companion which, in terms of length of time (but not number of episodes) remains the longest run (December 1973 through to October 1976 - 3 full seasons plus nearly half of another). Doctor Who was back its old format of the Doctor being able to travel anywhere in time and space, but there was one vital difference - the last time the show has this format (in the 1960’s) the Doctor couldn’t operate the TARDIS properly in that he couldn’t direct it to materialize where or when he wanted to. Now the Doctor could. By the end of the 10th season he would be taking deliberate trips to Metebelis Three. It is taken for granted now, but this actually must have been a huge sea-change for fans and viewers at the time - and also a major difference to the writers, because the TARDIS could and would be used in different ways than before - sometimes they would have to write it out of stories temporarily so that a plot resolution wasn’t so easily solved (a good example is Frontier in Space).

Perhaps the best news of all for fans (other than the new episodes of course) was the start of Target novelizations this year - the first three Doctor Who novels from the mid-1960’s were re-published, so fans could buy and read stories from the series early days (with no repeats going back that far, this must have seem like heaven for fans whether they were around 10 years before or less than 10 years old). The success of these republished novels led the way to an incredible publishing success story with brand-new novelizations beginning the following year, eventually having nearly every story novelized from the original run with sales of over 8 million). For fans of this generation in the pre-home vidoe era, this was the only way to re-live classic episodes.

Despite the departures by the scenes, 1973 must have been a great year to be a fan in the UK (being less than a year old and in Canada at the time, I can’t say I know this from personal experience) - Doctor Who was continuing to get more and more popular, doing new exciting things and celebrating its own past for the first time. If one can pinpoint a year where the show truly became a “national institution” in the UK, then 1973 would probably be it.