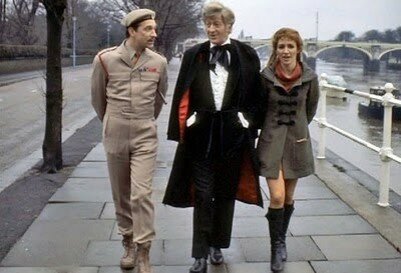 1970 was the year that Doctor Who proved it could continually stretch its format. The series had previously gotten rid of format that saw it alternating between science-fiction stories and “historicals”, turning it into a series that just had the sci-fi stories. But they were sci-fi stories that could take place in the Earth’s past or future or present day, or on many alien planets. For Season 7, the series turned into a contemporary, earth-bound sci-fi action series. For the only time in the show’s history time-travel was completely abandoned (other than cameo trips of a few seconds into the future in both The Ambassadors of Death and Inferno) - all the stories took place in the present day. For the first time there was even a 7 part story (The Silurians) which didn’t even feature the TARDIS at all! If the Doctor went into space, he had to do it as normal human would - as indeed he did in The Ambassadors of Death (a story about a rescue of astronauts from a trip to Mars - broadcast at the exact same time that the Apollo 13 crisis was happening back on Earth - how’s that for being “contemporary”!).

There was of course a new Doctor - the third one! And you could even see him in colour (if you were one of those in the UK who had a colour tv set at the time of course - not everyone did, with BBC1 (representing a third of the UK tv channels at the time and 50% of the “mainstream” ones) only having gone into colour in November 1969). The success of Jon Pertwee demonstrated that the change of lead actor wasn’t just a one-off fluke they happened to get away with, but rather that this was something that the show could continually do (and of course, continually would do). Note as well that this time the production team chose not to launch the new Doctor with a familiar old enemy to reassure viewers this was the same man and the same programme (despite all of the major changes) as had been done with Patrick Troughton back in 1966. The only familiar element that had come back was the Brigadier in the form of Nicholas Courtney (who had only been in 11 previous episodes in 1968, now more than a year later). Looking back on it now however, the quality of the 1970 season is so high that you can see this show hooking in viewers and getting them quickly to believe that this the same good ol’ Doctor Who even if Nicholas Courtney hadn’t been available and they had to cast a new actor for a newly created character in the role. Which isn’t an insult to Nicholas Courtney, but rather a compliment to everyone involved in making this season such an incredible one - the writers, actors, directors, script editor and producers.

One thing that nobody would necessarily have noticed at the time (particularly with “fandom” and fan knowledge not being then what it is now) but we can probably say in retrospect that 1970 was the year that the mantle had been passed in terms of who was the top Doctor Who writer. In the 1960’s it was definitely the show’s original script editor, David Whitaker. After shaping so much of the show and the original four characters (not just with his script editing for the entire first production run through 1963 and 1964, but also writing one of the scripts of that run, The Edge of Destruction), Whitaker was called time and time again to deliver scripts throughout the 1960’s, and often the really important ones. Need to introduce a new companion for the first time? Let’s call upon David Whitaker to write The Rescue and introduce Vicki. Need to introduce a new Doctor for the first time? Let’s call upon David Whitaker to write The Power of the Daleks. Need to introduce another companion? Okay, let’s get David Whitaker to introduce Victoria in The Evil of the Daleks. Want to introduce Zoe as a character? Right, let’s get David Whitaker to do so in The Wheel in Space. And we haven’t yet mentioned other stand-out scripts he wrote such as The Crusade and The Enemy of the World (nor the first Doctor Who novelization and the first Doctor Who stage play!) 1970 saw the last Whitaker script in The Ambassadors of Death, but it was heavily re-written by others by the time it was broadcast. The task of introducing an important character fell on to the shoulders of relative newcomer Robert Holmes, who had previously written two stories in Patrick Troughton’s final season for 1969. The mantle had been passed, and today Robert Holmes is often considered the greatest Doctor Who writer of all time, as he stayed with the programme (barring a brief break in the early 1980’s) until his death in 1986, but let us not forget David Whitaker who was essentially “the” Doctor Who writer who passed the baton on to Holmes and took that all-important first crucial start to this great race.

This may not be the right place, but I am trying to get a thread started for parents that are Dr.Who fans on the forum at nerdywithchildren.com. No one has replied yet, but I started a thread to get a discussion going there with my fellow Whovian parents if anyone is interested.

you have an excellent blog here! would you like to create some invite posts on my weblog?

My favorite era of the show! Great job on this trip through time, Luca!

I would like to thank or creating this interesting blog, because most of them getting benefits form your Mobil

great site.thank you for information