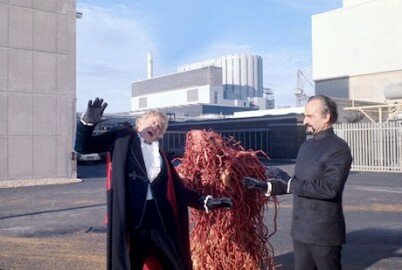 1971 is remembered best for two reasons - one, it is the year with the largest regular cast in the show’s history (The Doctor, one companion, 3 regular members of UNIT and a regular villain for a total of 6 regulars) and also the introduction of the last of the top 3 most iconic adversaries for the Doctor - his most personal one, that of The Master. Eight years in, all of the big three (the Daleks and the Cybermen being the other two) were now in place, and the creative team of producer Barry Letts and script editor Terrance Dicks ensured the Master’s iconic status by featuring him in every single story of this year. In his first story the Master teams up with the Nestene Consciousness, allowing the Autons to become the fifth returning monsters in the series history (after the Daleks, the Cybermen, the Yeti/Great Intelligence and the Ice Warriors). With the 2nd year of the Doctor’s exile and the establishment of the Time Lords in the Doctor Who universe (outside of the Master, there are two other cameos featuring Time Lords in this season, in Terror of the Autons and Colony in Space and all these returning enemies, Doctor Who had slowly but surely built up its continuity, something it would never truly go back from.

1971 was also the year of synthesizer’s in Doctor Who - they were a relatively new bit of technology now available in the market and featuring in the popular music of the day (in particular, in the British progressive rock bands that were starting to dominate the charts - something that can also be reflected in the narrative of the episodes of this season as the Master actually listens to King Crimson in his limousine in The Mind of Evil - the track “The Devil’s Triangle” for you trivia fans out there). Dudley Simpson handled all of the incidental music for this season (which was the very first time that had happened) but was instructed by Barry Letts to use synthesizers for all of the compositions in an effort to make the series more modern, futuristic and alien sounding.

All these moves clicked with respect to the ratings - they increased for the 2nd consecutive year, with the turning point being the lack of a ratings decline when the episodes were broadcast in the warmer months of May and June, as had happened the previous two years. This time ratings held up in the warmer months, with the turning point story being Colony in Space which saw good ratings throughout its run, demonstrating once more that “received wisdom” of the fans and what the general public liked (at least in the UK) are not necessarily the same thing. But while the programme was becoming more successful in the UK, worldwide the show was in a bit of a decline. The BBC hadn’t marketed the colour episodes of Jon Pertwee yet as not enough markets that traditionally bought Doctor Who had colour television (which would lead the BBC to make black & white copies of the Pertwee-era episodes, which is the only reason why several episodes from the Pertwee era exist at all - including this season’s The Mind of Evil). Meanwhile, party affected by the lack of rights to show Dalek stories, the BBC had found that sales of Troughton episodes were not as brisk as the Hartnell ones had been (it was also much easier to start off a new market with An Unearthly Child than it was with any other 60’s story, where you needed some background for who the characters were), and the series had no profile in North America. This would change soon….

This season, the 8th in the show’s history, was the last to feature 25 episodes (the previous season being the first). Presumably concerned about the requirement to have at least one story feature an odd-number of episodes, the decision was made to increase the seasonal episode count to 26 starting in 1972. But that is another entry…..

Luca, just wanted to say these are great! Really look forward to them.

I can remember being a bit confused upon my first viewing of this era. Due to the missing episodes at the time Inferno was the “first” Jon Pertwee story followed by The Claws of Axos. There was no proper introduction to Jo and there seemed to be no proper departure for Liz Shaw. (not realizing at the time that her giggling at the close of Inferno was actually her departure scene)