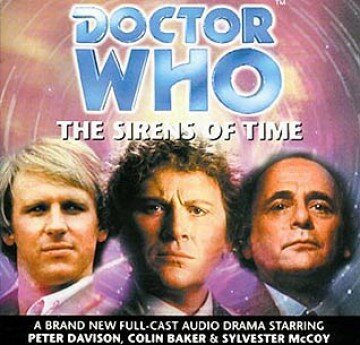 1999 was a great year for Doctor Who, one of the best for those years where it wasn’t being made properly for television. The series came back into the public eye in the UK in no less than two occasions, first with February with a new comedy episode, The Curse of Fatal Death, made for the Comic Relief charity television fundraiser, starring Rowan Atkinson as the Doctor, Julia Sawalha as his companion (and fiancee!) Emma with Jonathan Pryce as the Master, and also featuring cameos from Hugh Grant, Richard E. Grant, Jim Broadbent and Joanna Lumley. The big acting names drew all of the attention, although the episode is also notable nowadays because it was Steven Moffat’s first television script for Doctor Who. The comic relief episode garnered huge ratings for the show (the third straight time in the 90’s this happened when you add Dimensions in Time and the UK ratings for the TV Movie, all spaced three years apart mind you), which should have made everyone realize that there was still an appetite and market for the show.

Later in the year, in November, there was a special Doctor Who Night broadcast on BBC2, this time devised by Mark Gatiss, who by that point had made a name for himself with the BBC as one of The League of Gentlemen comedy group. It featured four Doctor Who comedy sketches written and featuring Mark Gatiss (as well as the likes of Peter Davison and David Walliams), documentaries and an uncut broadcast of the 1996 TV Movie (the first time the uncut version had been broadcast on UK television).

For many fans though, the biggest development for Doctor Who in 1999 was the launch of Doctor Who full cast dramas by Big Finish. The Big Finish Doctor Who audio adventures have become a phenomenom on their own,surviving the comeback of Doctor Who to television (which meant that Big Finish were no longer the only game in town when it came to Doctor Who as a drama) spawning hundreds of new Doctor Who adventures featuring all 8 of the classic series Doctors. They’ve given the likes of Colin Baker and especially Paul McGann to flesh out their Doctors after prematurely curtailed television runs, they’ve given fans a chance to experience un-made television scripts, actually-made stage play scripts, and have even had stories broadcast originally on radio. Like The New Adventures, they started off on a bi-monthly basis, their first release starring Peter Davison, Colin Baker and Sylvester McCoy in a multi-Doctor story.

The 1990’s was probably the worst decade for Doctor Who since it started, given how little new television adventures we got. But for the reasons mentioned above, 1999 ended the decade on a high.

I thought there were only three sketches - The Pitch of Fear, the Web of Caves and the Kidnappers. Also, for next year you have to mention Dead Ringers.

Don’t forget the recover of ‘The Lion’, the first episode of the Hartnell story ‘The Crusades’ in January 1999.  It was cleaned up by the informal BBC Restoration Team during the year and released on VHS together with ‘The Space Museum’ in January 2000.