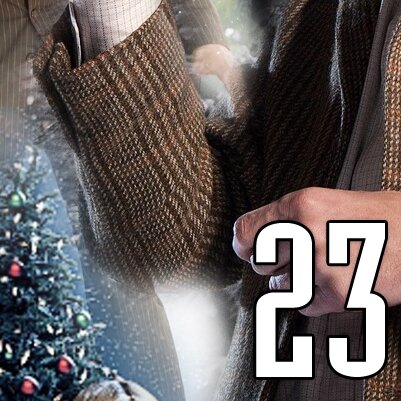 I Want To Spend My Christmas With a Dalek

Jolene ran for her life. The exhilaration and terror of the chase coursed through her. She heard herself cry out as she tore through the trees, branches whipping at her clothing and skin. The chilling voice kept her moving at a breakneck pace. 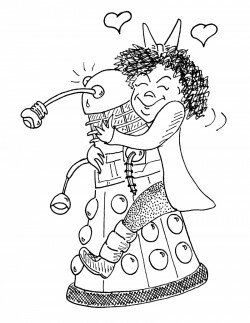 Lana was hiding in a ditch when Jolene ran by. She halted, nearly losing her footing and falling into the brush. Lana grabbed her friend’s hand and pulled her out of sight. In her other hand Lana held a gun.

“Where did you get that?” Jolene hissed.

Lana put a finger to her lips. She raised the gun and waited for the thing to arrive. Jolene could barely hear it gliding through the undergrowth over the sound of her own ragged breathing.

Then it was right above them. Jolene’s heart froze. She looked up, taking in the squat, pepper pot shape, the arm, the rapidly moving eyestalk.

“Halt!” it cried in that horrible monotone. “Halt or you will be exterminated.”

Lana leapt to her feet.

“Take that!” yelled Lana, pulling the trigger. The gun in her hands made a loud noise. The Dalek’s eye stalk drooped and it stopped moving. Lana laughed, but Jolene wasn’t amused.

“You said I could kill it this time,” she protested, climbing out of the ditch.

Lana took a remote control from her pocket and walked over to the inert monster. “It is my Dalek,” she said.

Jolene knew she was right, but that didn’t make it fair.

“You haven’t let me kill it once all day.”

“You can kill it tomorrow. Come on, it’s time for dinner.”

The injustice temporarily forgotten, Jolene was now aware of her grumbling stomach. Lana’s dad certainly knew how to make a great Christmas dinner and she didn’t want to miss it. She ran off after her friend.

“Does that thing have to be here,” Lana’s dad stared at the Dalek with obvious distaste.

Lana’s dad returned to the kitchen, muttering under his breath. A moment later, he returned with a huge roast turkey on a silver serving dish. Lana’s mum carved while her dad brought more delicious foods and arranged them on the table. Jolene was in awe of Lana’s table. It didn’t have any legs, it just floated. Jolene was always fascinated by it. Her own family couldn’t afford such nice things, so she was grateful to have a friend like Lana. Lana had everything. What Lana didn’t have, her mum could get because her mum was really important in the army. Right now she was cutting up the turkey, but Jolene knew full well that she knew how to use that knife for other purposes. Lana’s family was so much cooler than hers.

“Tell Joley where you got the Dalek from, mum,” Lana insisted.

“It was left behind after the Daleks were driven from Parnius, dear,” Lana’s mum replied. “I told you already.”

“Of course it’s real,” Lana said. “I wanted a real one and mummy got it for me.” Jolene had to admit that it looked real. She’d seen the fake models but never a life-size one and certainly not so detailed. “Mum had it fitted with a remote control so it’s harmless.”

Lana’s dad coughed. “Bloody dangerous if you ask me. We shouldn’t go anywhere near it.”

Jolene wasn’t so sure. All through the meal she kept her eye on it, expecting it to spring into life at any moment. The Dalek’s gun was removed, but that didn’t make it seem less frightening. At school Jolene had learned a lot about the war, and was reminded in countless drills that Daleks were extremely dangerous, resourceful and intelligent. Jolene ate her food and talked with her hosts, but couldn’t take her mind away from the killing machine standing in the corner.

“You know what’s inside them, right?” Jolene said when she and Lana were alone again.

Lana nodded. “Of course. There’s a bug in there. How else would it talk? But don’t worry, mummy had some scientists fix it so it’s not dangerous. Isn’t it the best present ever?”

“These things kill people, Lana. One of them killed Claire’s dad.”

Lana opened another of her numerous presents, revealing a brightly coloured TrixBot. Jolene had wanted a TrixBot all year, since seeing the ads on the net, but her parents couldn’t afford one. Lana saw her ogling at the toy and handed it over. “You can have this.”

“Why would I when I have my very own Dalek?” Lana pressed a button on the remote to summon her favourite toy. 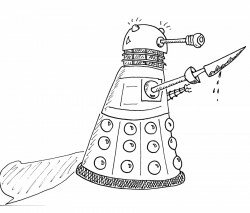 Moments later, the Dalek glided into the room. Jolene was transfixed by the hideous machine. She couldn’t take her eyes off it. There was something different, something deliberate about the way it moved.

To her horror, the machine stared back. Lana wasn’t moving the remote, yet still its eyestalk swung from her to Jolene. It seemed to be assessing them.

It wasn’t the creature’s single eye that froze Jolene with terror.

The sucker on the end of the Dalek’s arm was wrapped around the handle of a knife – the same knife Lana’s mum had used to carve the turkey.

It was dripping with blood.

Richard Salter is a British writer and editor living near Toronto, Canada with his wife and two young sons. Once an editor of Myth Makers, he went on to edit the short story collection Short Trips: Transmissions for Big Finish Productions and is now working on World’s Collider, an apocalyptic anthology. He has sold over twenty short stories including tales in Solaris Rising, Warhammer: Gotrek & Felix The Anthology, Phobophobia and Machine of Death 2. Visit him online at www.richardsalter.com

Hi my loved one! I wish to say that this article is awesome, great written and include approximately all significant infos. I’d like to look extra posts like this .

GAH! my frst comment was lost!anyways sorry for the beatled post ive not been online much.i still think the sketch is a little messy, but this time not in its sketchiness, but rather in the sketchy quality juxtaposed against the still rather tight and illustrative execution of the colors. free up your colors, leaning in the direction of the impressionistic, and u’ll nail it!eh, at least ur experimenting and growing.and the thought process of each post is becoming clearer each time, which is good. the process is not important in illustration or advertising, but it is in every other area of art. of course, it’s up to u whether or not it’s important to YOU. i prefer seeing the process since i love drawing so much. but it’s an aesthetic learned.im also glad to see ppl besides me enjoying the new Dr. Who. well, im not watching it NOW, as i cant afford cable, but u know what i mean

Alan   I notice that you don’t have tcbckaark links under your posts on your own site (in the usual Trackback (0)  format). Have you implemented Tom Coates’ tcbckaark suggestions from plasticbag.org? I think I read somewhere that the problem with his approach (which I find very interesting) is that it will send a new ping each time you update a post, even if you’re just tidying up punctuation or grammar. MT’s vanilla functionality is smart enough only to ping sites (including weblogs.com etc.) when the post is first published.  This might be your issue?