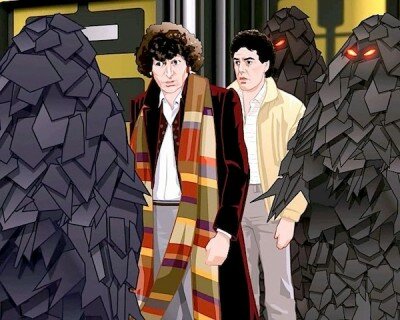 You have to give credit to Doctor Who fan supreme Ian Levine. He appears to have more money than God and he uses it frequently for Doctor Who, using his fortune to help obtain many, many missing episodes and often doing elaborate fan projects completely out of pocket.

Exhibit A (this week)* is his animated version of the unfinished 1980 Douglas Adams story Shada. Yes, Ian Levine paid all the original actors still alive to come back, 30 years later, and record their parts for all the uncompleted sequences (the only one who didn’t take part was Tom Baker, who was replaced by actor Paul Jones). And he’s had people do a flash animated version of the missing parts.

Here’s a report about it in Starburst. And here’s a rave review of it in the same online publication.

What’s astounding, and possibly mad, about this is Levine has done this entirely on spec. The animated sequences were not commissioned for a Shada DVD. It’s now in 2Entertain producer Dan Hall’s court to determine if he wants to use it.

1) is borne out by the fact that, the man put together a version of Shada which, if uncomissioned, he can’t sell commercially—even put on YouTube—because the copyright to Douglas Adams’ script is held by the BBC (and by Adams’ Estate). So Levine has paid a truckload of money for something only he can watch in the privacy of his own home.

2) is pretty much the same as 1) although it must be said… he can watch a complete version of Shada with animated sequences and voicework by most of the original actors in his own home, which is more than I can do right now (as a mere mortal I’m stuck with either the awful 1993 VHS version where Tom Baker has to narrate the increasingly non-existent sequences, or the even more awful 2002 Big Finish webcast/audio version featuring Paul McGann reading Douglas Adams like an automaton). So perhaps crazy is good.

I have no idea where this will end up. Levine and the Doctor Who DVD producers have had a… stormy relationship to put it mildly. So it’s hard to see where this bravado will go. But I have to say it’s one hell of an entertaining Mexican standoff to watch.

*(Exhibit B will no doubt be the special edition version of the Levine-produced fan video from 1995, Downtime—itself a similar mad money venture at the time as it featured just through the sheer number of actors that appeared in it as well as the presence of Who director Christopher Barry—which apparently has new scenes featuring Sylvester McCoy as the Doctor)

<< Why are the current new series DVDs so lame?