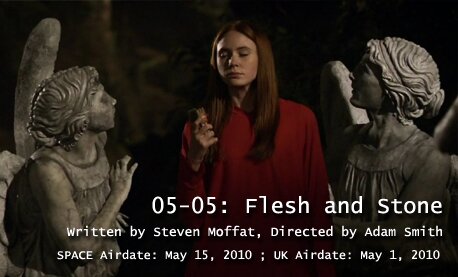 The Big Idea: From stone to ship to forest, the Angels are chasing the Doctor and his friends. They’ve already gotten inside Amy’s head, and the Doctor has no idea how he’s going to stop them. But what if they’re not the most dangerous thing on the ship?

Not to Complain, But… The decision to show the Angels moving undermines one of the most unnerving implications of Blink: the fact that they froze into statues even when nobody appeared to be looking at them… except for us, the television audience. If they’re affected by our gaze, doesn’t that mean that we’re interacting with them, and that they might be able to interact with us? Given that the Angels are now capable of climbing out of a television screen and one’s own imagination, making them exempt from the audience’s gaze seems like a missed opportunity for keeping that audience awake all night, every night, forever. Also, when the Doctor was surrounded on all sides by Weeping Angels on the secondary flight deck, shouldn’t the Angels have seen each other and thus locked each other in place?

All Things Considered… In short: everything that was true last time, with cherry sprinkles. Again, the Clerics are largely interchangeable redshirts; Crispin and Phillip are characterised entirely by one of them being named Phillip and the other Crispin. Again, Father Octavian shows great dignity in the face of the Doctor’s disrespect. Again, the plot twists are very well executed, and the solutions to the various life-threatening predicaments are well thought out by both the writer and the characters.

But this isn’t just more of the same; it’s the last half of a two-part story, and just as the threat steadily increased throughout the first episode, this episode picks up with the danger levels already at breaking point and keeps pushing. The set pieces are more intense, from the opening sequence in which the Doctor and his friends are trapped in a very short corridor with four Angels and know they have to turn out the lights, through to Amy’s nerve-wracking blind-man’s-bluff walk through the forest of statues. The idea that an Angel can come to life in the mind’s eye is chilling, and Amy’s countdown deserves to be mentioned more than once. And despite the weak portrayal of the extras, Father Octavian has the most dignified and moving death in the season so far.

Even better, the story swerves off in an entirely unexpected direction when the crack appears in the wall of the secondary flight deck. Suddenly, these events turn out to have much wider significance to the Universe at large—and when the Doctor realises that even the Angels are running scared of the crack, the danger level moves beyond yellow and red into colours that they haven’t invented names for yet.

Flesh and Stone‘s deepest flaw isn’t really a problem with this episode, but with this season. On several occasions, we don’t see characters speaking their lines, but instead hear the lines dubbed over a shot of whatever it is they’re looking at; for example, in the forest when the clerics are looking at the crack. This has happened before; for example, in The Beast Below, we should have seen the Doctor’s expression when he told Amy that her choice could have killed everyone on the ship, but instead the camera was looking out of the window. If the use of voice-overs is a deliberate choice by the new producers, it’s an odd one that distances the viewer from the characters by refusing to show them as they react; the story loses its immediacy, and one gets the impression that the show’s editors are scrambling to work with extra dubbing and insufficient footage.

Good thing that we’re all Doctor Who fans, then, and more than capable of seeing beyond quirks of production quality to the meat and bones of the storytelling. The tension starts high and increases throughout the story, the premises are clever and the solutions well considered, we get lots of hints about the bigger picture, and the dialogue is so consistently funny that I chose the line of the week by throwing a dart at the transcript. Best of all, we’re starting to see character development for the Eleventh Doctor; not just in the mysterious jacket scene alluded to above, but in the final scene, which seems to imply the realisation that he may have destroyed the entire Universe by screwing up a perfectly ordinary girl’s wedding day. At least, that’s how I choose to interpret it at the moment, and given the precision of Moffat’s plotting, I have absolutely no doubt that by the end of the season, all of my questions will be answered.

Line of the Week: “If anything happens to her, I’ll hold every single one of you personally responsible, twice.”