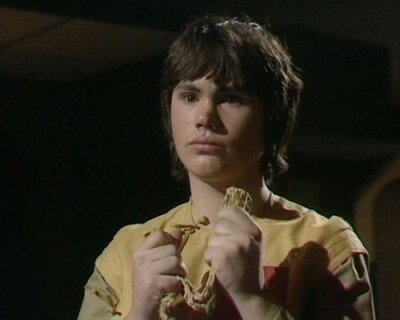 In the end Adric’s departure was the most dramatic companion departure in the show’s history, and for that reason it is number one on our list. But it is not simply the fact that the character is killed off (permanently by the way - which needs mentioning given the companion “resurrections” which have occurred since then) which makes this such an effective departure, it is also because of how well-written the character is in his final story, effectively and convincingly completing a character arc that had begun the previous season. Adric starts off as an impulsive, well-meaning character who often makes mistakes in his youth and inexperience (e.g. his plan to save Romana in State of Decay or his idea to go after the Master in Logopolis) -  but he also was influenced and inspired by the Doctor to try and do the right thing for the good of all, even at his own personal risk and even if it meant trying to do too much (such as in the examples I’ve quoted). Which of course is how the character ultimately meets his demise, albeit after he has saved the lives of billions on Earth. It is quite notable that Adric is the only alien left on board the freighter in Earthshock, and he stays behind to try save it at the very end while all the humans leave their own planet to its fate. An alien interfering in the affairs of Earth on behalf of the Earthlings while the Earthlings themselves are apparently unable to help themselves…......where else in Doctor Who have we seen that before? With the show’s title character of course.

Clearly Adric looked up to the Doctor who was very much a father-figure for the now-orphaned Adric in this 4th incarnation. The 5th Doctor and Adric often squabbled and didn’t get along so well, with the view often stated that the Doctor was now physically too close in “physical age” to act or seem like a mentor to Adric - a view that I’m inclined to agree with. There’s something else at play though - Adric get irritated the moment in Four to Doomsday that the 5th Doctor prefers to take Tegan with him to explore the ship rather than Adric. This was never a problem in the brief period when he traveled with Romana and K9 in the TARDIS or when he traveled alone with the Doctor. Now the Doctor has regenerated and has other companions that he prefers to spend time with when he can. Adric is no longer the favourite and his surrogate father is effectively preferring his other siblings who have more recently come on board. The Doctor probably does this because Adric is much more like the Doctor than Tegan or Nyssa are, and Adric is more like a younger brother than a son to him - and so often older brothers don’t want to hang around with their kid brothers. The Doctor is harsher on Adric for his mistakes in Kinda than he is on Tegan for her idiocy of trying and succeeding in moving the TARDIS in Four to Doomsday and is annoyed when Adric is so much like the Doctor that he’s even able to pilot the TARDIS on his own to rescue the Doctor and Tegan in The Visitation. He is, as he claims at the beginning of Earthshock, regularly teased by his fellow travelers - something quite prevalent in Black Orchid for example. All this to say, when Adric complains at the beginning of Earthshock that he is “fed up” of life on the TARDIS, it is very believable. It certainly doesn’t have the “where did this come from?” feel to it that Sarah Jane’s attempt at a tantrum in The Hand of Fear did.

The tragedy of course is that Adric dies just after he and the 5th Doctor start to come to an understanding and work together well, something they hadn’t really done for much of the preceding adventures. On the positive side, Adric’s death is quite noble and heroic - as mentioned above, he is responsible for saving the lives of billions of humans in the 26th century as his actions inadvertently send the freighter back in time. And his actions also help to save the lives of the Doctor, Tegan and Nyssa - Adric is intelligent enough to grasp that with his gold star on his badge could be used as a weapon against the Cybermen which not only causes a distraction to overcome Ringway but allows the Doctor to take possession of the gold star.  Lots of people have of course noticed that Adric’s mathematical excellence saves the billions of humans in the 26th century, but it’s often not credited for saving the lives of the rest of his companions in the TARDIS. If Adric didn’t get an award for being great at maths, there is no gold star that the Doctor can use to overcome the Cyberleader in the TARDIS. It’s also a good thing that Adric’s pride (some would say arrogance) in achieving the award meant that he always wore the gold star. But then it was long established that Adric believed in badges of honour - the belt that he’s holding in the picture above, during his final moments, was his brother Varsh’s originally and a symbol of belonging to Varsh’s gang, given to him by another member of the gang on Varsh’s death (where he also heroically died saving others).

Revenge of the Cybermen established gold as a weakness to the Cybermen, and Full Circle established Adric’s gold star (along with the Outler’s belt and Adric’s musical “motif” which also makes a return appearance in his final moments despite the musical score being done by a different composer than the person one who originally composed it). Neither story was written with Earthshock in mind, but the continuity elements from those former stories were blended beautifully in the powerful, dramatic conclusion of the latter, resulting in the most memorable and dramatic exit for a companion to date, and one which worked perfectly for the character’s two-season arc during the show.

Memories of Adric and his story arc are, unfortunately, obscured by how unpopular the character became. Your analysis picks out some very important elements in Adric which are often forgotten or ignored.

I first saw “Earthshock” at a DWIN convention, as quickly as we were getting episodes in the old days. The silent ending, credits scrolling over the shattered badge, left the entire room speechless. It was a moving moment at a time when deaths of characters were rare on TV shows.

One other note: thank you for the work you’ve put into this analysis. I may not agree with the entire order, but then isn’t a part of Doctor Who fandom making up lists and then arguing over them, much to Colin Baker’s chagrin?

I’ll add my thanks to David. The companion run up has been most worthwhile. Luca, thanks for taking the time to do this. With Enlightenment gone, you’re marking the blueprint for the new way for DWIN to deliver content.