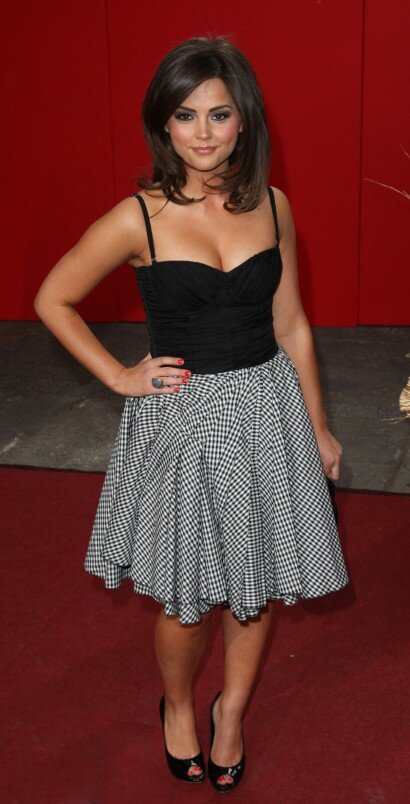 So now that the countdown is complete, we have one more companion exit to deal with (no pun intended) posthumously. This countdown started so long ago that when we began Clara Oswald was still a companion in the TARDIS and thus hadn’t figured into the original numbering. So where would Clara’s departure fit in?

At the moment (and it is possible that one’s mind might change with the passing of time since this departure is still so “new’) I think Clara’s rubbing shoulders with Peri with respect to their respective departures - part of which is perhaps due to the fact that Peri’s departure is the one that Clara’s arguably contains the most similarities to (although generally speaking it is a pretty unique departure). Both companions are seemingly killed off for good in the middle of an epic adventure, only for it to be revealed during the last act of the said epic adventure that the companion’s death wasn’t quite as final as it seemed. Of course, that is supposed to be Clara’s actual death in Face the Raven (whereas it ends up not being so in the case of Peri) - but at the same time she is effectively granted ageless immortality by the stories end when the Doctor uses Time Lord equipment to extract her right before her death (which she will eventually be returned to, although that could be a billion years later). Certainly the ending does fit nicely with Clara’s increasing recklessness that is set up throughout the season - and also gives us the companion departure from the new series that is the least tragic or sad from the point of view of the companion at least, so “differential points” for Clara’s departure on that front. For that reason alone, it is probably the most satisfactory of the modern series’ companion departures (after 10 years, it seems silly to call it “new’).

Clara’s departure might also be said to share similarities with Romana’s (which I placed just ahead of Peri’s) because they are the two companions who’s departure most signify that the companion has become so much like the Doctor that they end up leaving the TARDIS to travel time and space on their own, and with their own companion for that matter. Romana’s companion of K9 (or even Biroc) I do think works better than Clara’s companion of Ashildr in terms of being a logical choice. I don’t have an issue, as some have had, that Clara is now traveling time and space with the girl that is responsible for her eventual death - Clara’s recklessness and the President of the Time Lords who forced the situation have to take the real blame here since Ashildr genuinely didn’t intend for Clara or anyone to get hurt and they wouldn’t have done so if Clara hadn’t intervened behind the Doctor’s back. No, the bigger issue is that traveling for the rest of eternity with someone you’ve not had much chance to develop any chemistry with or a genuine friendship with doesn’t quite work as well as it does in Warriors’ Gate. Having said that, Ashildr also happens to be an immortal, ageless girl, so Clara does have that in common and there is plenty of time for chemistry to build post-series. Given that Big Finish do not yet have a license to do 12th Doctor stories, those hoping for a Big Finish spin-off audio series about two pretty, forever-young-looking girls traveling time and space together may have to wait a while to hear it…...

Head of the Class >>

AS much as I like the idea of ‘Clara & Me’ (on a number of levels), there would be several issues which might lead this partnership to be less than eternal.

First, Ashildr has already lived through the entire history of the universe. Does she have no longing for an end? Would she not suffer some sense of ‘been there, done that’? Would she be forced to seek solace by viewing the universe through a fresh pair of eyes - Clara’s? (Don’t get me started on the Doctor and his need for companionship.)

Second, how long would Clara be satisfied with roaming the universe? Would she be indestructible? (Fearless and indestructible could be a very bad combination.) Or at some point would she come to a sense of responsibility and say ‘my time is up’?

Finally, what if they’re just really bad roommates, the time-and-space equivalent of the Odd Couple? Now our sci-fi series or our slash fiction has now become a sitcom.

I’d also be worried about a Clara and Me show. Mostly because Clara is shown as the Doctor character with Me as the companion. Me, with hundreds of billions of years of experiences. And Clara with all the wisdom of a lettuce.

I agree with both comments.  I also wonder how long Clara would be satisfied with roaming the universe.  It is one thing to be the clever, brave and yes a reckless travelling companion to a vastly wiser explorer of time and space.  It is another thing altogether to assume that explorer’s position (without the benefit of his wisdom or guidance).  Now she will have to take full responsibility for her decisions in a way she has never had to before because the Doctor was always there to do the heavy lifting.  And that would be eye opening.  Another thing that I wonder about is homesickness.  Clara always tried to balance time travel with her job and other responsibilities on earth - going home after adventures with the Doctor.  Will she ever be able to go home now?  We know that she was dead by the end of “Face The Raven” which meant that she was still dead on the fictional day after that story ended.  Would she visit her father (assuming he is still alive), her mates and former co-workers at the school – all of whom would have learned about her death and who would likely have attended her funeral?  This is all idle speculation, as we will never know. But being both dead and alive could prove difficult among those she knows and cares about.  Although I hope she would have many exciting adventures, she might begin to understand first-hand the kind of loneliness that the Doctor has experienced for so long.