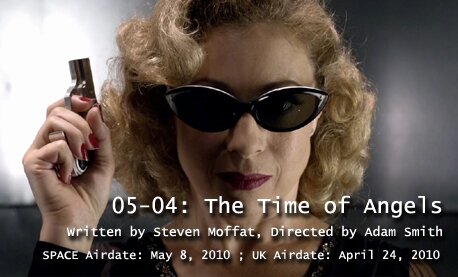 The Big Idea: The Doctor answers a millennia-old call for help right on time, and gets roped into hunting a Weeping Angel through the last resting place of an extinct alien race. Blink, and you might miss it—and by “it,” we mean the rest of your life…

Some Quick Bits of Trivia: The security guard who falls foul of River Song’s hallucinogenic lipstick is played by Mike Skinner, a British rapper better known as The Streets. When this episode was first aired in the UK, the Doctor’s final, stirring, climactic speech was interrupted by an animated crawl-advert for the following programme, “Under the Rainbow”; heads subsequently rolled.

Not to Complain But… The editing in this episode isn’t as strong as it should be. At one point, Amy reacts in shock to the Angel’s sudden movement on a monitor, but when we see it, it hardly seems to have moved at all. Immediately after Christian’s death, Angelo is positioned and framed in such a way that it’s not immediately clear we’ve cut to someone different; for a moment, it seemed as if the Angel had flown away, leaving Christian standing where he was.

All Things Considered… When considering a hunt through a dark alien ruin for one of the most terrifying monsters ever created for Doctor Who, one’s thoughts probably don’t go immediately to The Sontaran Stratagem. But hang on a minute. The Eleventh Doctor’s relationship with Father Octavian is thought-provokingly similar to his relationship with UNIT’s Colonel Mace, a professional soldier who’s perfectly willing to put his faith in the Doctor, and who proves his professionalism and worth even when the Doctor responds to that faith by constantly belittling him. Bearing this in mind, it’s worth comparing the two serials’ pairs of cannon-fodder double-acts. In The Sontaran Stratagem, Harris and Gray are given just enough dialogue before their capture and brainwashing to differentiate them as individual characters, rather than cut-and-paste extras. Christian and Angelo in The Time of Angels don’t fare nearly as well; they exist only as plot functions whose purpose is to wander into the dark and not come out again.

This is not a criticism, it’s just an indication of the very different approaches of the two showrunners. The RTD era was about the characters and the character moments, often at the expense of the plot; and if The Time of Angels is emblematic of Who under the Moff, it’s going to be about plot, ideas, and surprise moments, at the expense of developing the minor characters. Which is, let’s just state this again for the record, not a criticism, because those ideas and surprise moments are very, very effective indeed: the nail-biting sequence of the Angel emerging Samara-like from the video recording; the Doctor and River’s sudden horrifying realisation that they’ve forgotten something vital about Aplan statuary; and, as already mentioned, the Angels’ appropriation of Sacred Bob’s very soul.

Perhaps most importantly, however, our heroes keep their wits about them even when they’re clearly terrified, and overcome the threats by out-thinking them. Steven Moffat has said that Doctor Who is a safe way of telling children that there are things out there that want to eat them; and in that respect, he’s telling the children that they can overcome those fears by thinking about them. This is how Amy saves herself from the video Angel, and this is how the Doctor, even in a moment of shame and despair, is able to trick Angel Bob into revealing that the crashed ship is safe to enter.

The direction and editing may not be as effective as they were in Blink, but what is? Steven Moffat has written another cerebrally scary story that leaves the audience waiting impatiently for the next episode. That’s got to be counted a success.

Line of the Week: “Whoo! You lot, you’re everywhere! You’re like rabbits! I’ll never get done saving you.”