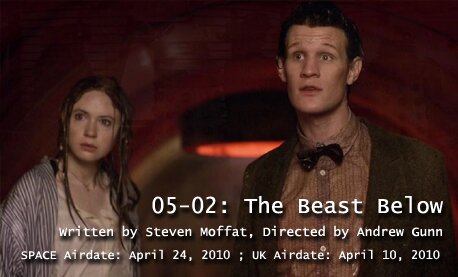 The Big Idea: The Doctor takes Amy on her first trip in the TARDIS to the Starship UK where they encounter Liz 10, the creepy bipolar Smilers, and a secret that haunts the souls of the last remaining Brits.

Some Quick Bits of Trivia: Sophie Okonedo who plays Liz 10 provided the voice of Alison Cheney in the BBC Doctor Who webcast Scream of the Shalka in 2003, and was later nominated for an Academy Award for her performance in Hotel Rwanda. The episode marks director Andrew Gunn’s debut with the series (Gunn has previously directed episodes of BBC’s Life on Mars and updated version of Survivors). Since we haven’t mentioned it up until now, Matt Smith was one of the first people to audition for the role of the Doctor. He impressed everyone (in spite of being only 25 at the time; producer Steven Moffat was thinking of casting someone in their late 30s, early 40s) but they gamely kept holding auditions until Executive Producer Piers Wegner said. “It’s Matt isn’t it? It’s always been Matt.” Karen Gillan had a more conventional casting experience, though Steven Moffat claims to have said after watching her initial audition tape, “She seems good but she’s rather wee and dowdy.” This opinion changed at the first in-person audition…

Did You Notice… Moffat and his production team seem to have quite the fetish for the Union Jack (and yes it is the Jack because they’re on a ship!) One could argue that it’s part of the conceit, but still. Oh, and the crack appears just above the Union Jack on the ship in the final scene…

Not to Complain, But… The pacing in the story is a quite rushed. There is some great mood and menace established at the beginning, but it has to give way to denouement far too quickly without allowing the narrative to breathe. The revelations would have been much more powerful if we’d had time to get to the know the characters better. Terrance Dicks: write us a TARDIS novelization post haste! And while I don’t count myself among the Murray Gold haters, there were times when I had a hard time hearing the dialogue over the music (granted Matt Smith doesn’t quite have David Tennant’s diction).

All Things Considered:  Steven Moffat’s script is brimming with ideas, imagery and wit and in the best tradition of Doctor Who a lot of it is lovingly borrowed from other sources. The whole thing is basically a modern fairy tale. Amy wandering around in her nightie was reminiscent of Wendy in Peter Pan and Arthur Dent in Hitchhikers Guide to the Galaxy. And her poetic narration near the end sort of sealed the deal (much like River Song’s in series four’s The Forest of the Dead).  The idea of a world on the back of a giant beast is similar to Terry Pratchett’s Discworld or even the Ojibwa spiritual belief of Turtle Island.

It’s remarkable so far how much Moffat seems to be mirroring the Russell T Davies template for episode function.  We had the intro episode, and now we have the slightly outlandish look at the remnants of humanity on a studio-bound spaceship, complete with companion and Doctor getting to know each other better, stepping on each others toes and last-of-the-Time-Lords revelation. Moffat also seems quite content to meld the future with the present, having characters dress in contemporary clothing and use familiar vernacular (although to be fair he was already to such during the RTD era). While Moffat is definitely putting his own stamp on the series, franchise consistency seems maintained.

As I alluded to above, the story really races by and it’s hard to gauge the emotional impact of the whole thing by the end. Tacking on the lead-in to the next episode also really contributed to a sense of “oh well, onto to the next adventure.” Surely those final moments could have been better spent allowing this story a little more wiggle room.

But there’s is much to enjoy in the episode and it does flow a bit better on repeat viewing. Doctor Who is clearly in caring, thoughtful hands and I look forward to the weeks to come.

Line of the Week: [neatly summing up the Time Lords and the Time War] “There were. But there aren’t…just me now. Long story, it was bad day. Bad Stuff happened.”