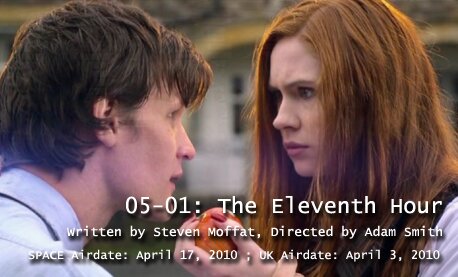 The Big Idea: The newly regenerated eleventh Doctor crashes the TARDIS in the English village of Leadworth, where he meets eight year-old Amelia Pond. Good thing too, as she has a crack in time and space on her bedroom wall and Prisoner Zero has escaped…

Some Quick Bits of Trivia: Caitlin Blackwood, who plays Amelia, is actually Karen Gillan’s actual cousin, though the two never met until the filming of the story. The Doctor’s view of the green was achieved using a series of still photographs animated together. British astronomer Patrick Moore cameos in this episode—astonishingly, this is the first time he’s appeared on Doctor Who and Moore’s monthly BBC program, The Sky at Night, has been on British television longer than Doctor Who! The Doctor’s dislike of foods was taken from Tigger and haycorns in the Winnie the Pooh stories. The new Doctor’s costume was mostly innovated by Matt Smith himself, who suggested the tweed jacket and, yes, the bowtie!

Did You Notice… When the Doctor tells Amy there’s no other reason for asking her along, the TARDIS scanner shows a crack of the same shape as the one in Amy’s room. The Doctor says no and turns off the scanner. Which means he’s lying and the crack is somehow tied to Amy. Does this things have anything to with the “coming silence” spoken of by Prisoner Zero? Probably… Also: why does a duck pond not have any ducks?

Not to Complain, But…You would have thought given how much the Doctor notices, he would have spotted that Amy’s skirt was way too short to be Metropolitan police issue and that the radio was a fake. (Perhaps he was simply enjoying it too much, like some male viewers and presumably the production team!) Also ten minutes seems like an awfully quick period to propogate a computer virus that resets every clock even with the might of the world’s science community beside it. And in a continuity error of the editing kind, the Doctor grabs the white hot TARDIS key out of his jacket pocket in wide shot ten seconds before it happens again in close-up.

All Things Considered: It’s a new era for Doctor Who—new producers, new head writers, new lead actor, new everything. And it’s natural in this case to notice what’s different: the more middle class English village vision of Britain, the stately way things unfold, the lovely banter between the Doctor and Amy, the emphasis on fairy tale, the 70% more timey-wiminess. But so much of Doctor Who as we’ve known it is there too: the continuity nods to The Christmas Invasion and other stories, Murray Gold’s (rather nice) score, the emphasis on the Doctor/companion relationship.

It’s the combination of those things that make The Eleventh Hour so compelling. It’s that wonderful combination, that Doctor Who does so well, of radical change and traditional fare. A lot of what’s on hand is what we’ve seen before from writer Steven Moffat: look out the corner of your eye, wibbly wobbly, ordinary things turned at a right angle to become creepy. But don’t let the familiarity fool you because there’s an awful lot of immensely clever things going on with this story. Traditionally, the new Doctor has to live up to his companions’ expectations based on the previous incarnation—and in doing so lives up to the viewer’s expectations. With the Doctor regenerating alone, he has no relationship with anyone and that inbuilt drama is taken away. Moffat gives it back by having the Doctor meet Amy at the age of eight and then meeting her again 12 years later. Now the new Doctor has something to live up to: Amy’s expectations of the wonderful man she knew long ago. With a stroke, Moffat enables the Doctor to prove himself to all of us.

The relationship with Amy as a result is something quite special. Past companions in the new series have been ordinary people thrust into a universe of strangeness and wonder. Amy meets a fairy tale prince of a man who opened her life to new vistas and then ruined her life as a child by going away. She has had to live her life with that brief taste of wonder stuck in an ordinary world. It’s no wonder she’s a bit messed up. Karen Gillan gets that, and gets the tensions in a character who has led a life hoping for everything and getting little. She’s spiky, vulunerable and a bit mad. A bit like her raggedy Doctor, really. It’s going to be very interesting to see how this relationship develops.

The Eleventh Hour is owned by Matt Smith. From the moment he climbs out of the TARDIS, he is the Doctor. The mini-adventure with Amelia which starts with him playing Cat in the Hat and ends with him taking on the crack in the wall is a stunning run through the gamet of states of mind that make the Doctor the Doctor. The genius is in the temprament Smith brings to it: he plays the Doctor as the mad uncle who takes little kids seriously. And when he finally is ready to claim who he is at the end and warns the Atraxi it’s wonderful to watch because he speaks with a quiet authority that’s unbelievably disarming.

The Eleventh Hour may possibly be the best debut story a Doctor has ever had. No other story has so resolutely established the central character or given him such a showcase to show what he is capable of being and doing. The eleventh Doctor is here. Long may he reign.

Line of the Week: “Hello. I’m the Doctor. Basically…run!”