Oh dear me. Look at this blog. So dusty and unattended, except for the occasional look-in by Luca. Let’s get things going. Maybe drive a few crop circles and get some attention… 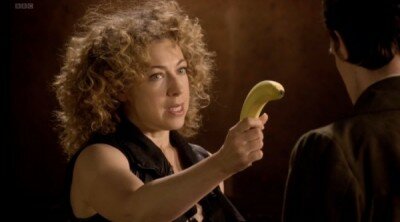 ‎“I was on my way to a gay gypsy bar-mitzvah for the disabled….”

What did you think of Let’s Kill Hitler? Sound off in the comments. Our latest TARDIS file is now up!

Best lines of the ep?

Rest of the episode?  Well…you certainly had to follow along quickly with everything in order to keep up and understand what was happening.
Clever of Moffat to come up with a way to essentially get rid of the baby (which would have put a cramp in the style of the TARDIS occupants for sure).  But on the other hand, it was all bit contrived in my opinion.  I mean, a ‘best mate’ who has apparently been by Amy’s (and Rory’s) side most of their lives but we’ve never heard of her until now?  Presuming she is the ‘astronaut girl’ who apparently then regenerated into ‘Mels’ in Florida (or wherever she was in the US at that point), I guess she managed to somehow get to a tiny Scottish town in the middle of nowhere to be adopted and raised in the same place as Amy and Rory.  A little bit far-fetched…unless there’s another missing link/regeneration still to be explained.
The whole thing would have come off better if she’d at least been mentioned in a previous story, or even just referenced when Amy told Rory that the baby was named Melody.  I’m very surprised Moffat didn’t do this, given his brilliant history of throwing in the most obscure reference or shot that ends up meaning everything later down the line. It’s almost like he forgot to do it.  Or had another idea that didn’t pan out and he came up with this idea instead at the last minute.
I enjoyed the miniaturised people in the android-thing, and I’m wondering if they have anything to do with the Time Agents (as in Captain Jack and his lot) - seeing as they were Moffat’s creation in the first place.  Now THAT would be an interesting spin-off series idea!

I’m also wondering if most of what we see of River going forward will be the ‘new’ River (as opposed to the River we’ve known until now)....there’s still a lot of unanswered questions with the new one, most obviously how she ends up in prison for killng The Doctor(assuming it is him, and is it what happens by the lake?)  We also know that we haven’t seen the end of the Silence or the Eye-patch Lady this year, and an interesting shot of River in the new promos currently running makes that extremely intriguing!
Also, we are getting near the end of the storyline that the previous River would have with The Doctor, since they’ve already shared their ‘last’ kiss - in her timeline anyway - so storywise there’s only limited time left before she meets Ten in the Library and that’s the end of that. Okay, yes there could be loads more that happens between those times and hopefully we will still see some…but this way Moffat has written himself out of that corner with a whole new angle to write for her…and in a way that means we didn’t lose Alex Kingston in the role.

I’m still a bit confused about how her timeline is going the other way from the Doctor’s, or will end up doing so if it isn’t yet.  I may need to draw up a big chart (or work it out with salt shakers and forks…a couple of you reading this may remember my pathetic attempts at that a few months ago lol!)

Anyway, overall I thought it was a satisfying conclusion to the cliffhanger of last spring…and as usual, in getting some answers we now end up with even more questions!

Looking forward to next week..and yes, even though it’s Labour Day it is scheduled, I checked the BBCAmerica site to be sure and they actually aren’t pre-empting it on a long weekend for once, so looks like we will stay on track with the UK airdates all through this time!

Oh and I nearly forgot - the ‘appearance’ of Rose, Martha and Donna was a genius touch… “Guilt!  More Guilt!  Also Guilt!”
ROFL!

Why was regeneration disabled?  I assume it was because Mels shot the Tardis but regeneration has always been more of a physiological function between the Doctor’s body and the organic bits of the Tardis, not a mechanical thing.  And, if it was the gunshot, isn’t it curious that that one thing was disabled and, apparently, nothing else?

Sure, it was necessary for the plot to work.  I just don’t like blowing off such a basic Doctory thing like that in such a cavalier way.

While we’re talking about regeneration, why does the Doctor need the Tardis and River Song doesn’t?  It seems like being only half time-lord would make regeneration even harder for her.

Finally, is this the end of River for us? I hope not. She’s one of the best ongoing characters the series has come up with. I really hope she’s not done but it won’t make much sense since their timelines are going in opposite directions. This was the first time she’s seen the Doctor so it should be the last time he sees her.  Now that her arc is complete, I’m tempted to go back and watch her episodes in order going from “Kill Hitler” first and ending with her being deposited in the library’s computer by Tennent’s Doctor.

I really enjoyed it, and as Julie pointed out, it had some great lines.

But I didn’t love it…  Originally I thought maybe it got over-hyped, but it was when one my co-workers tracked me down this morning and complained about it that the “penny dropped.”

He said, and I agree, that it felt less like a an episode and more like a point by point checking off the list of things Moffat wanted to tie up.  Much like Star Wars, Episode III was.

That said, the trailer for next week looks awesome!

I really enjoyed this episode, especially on the second viewing.  It’s so interesting trying to piece things together from previous moments this past season.

Why was he dressed in the same outfit from Amy and Rory’s wedding?  He was gone for 28-29 minutes in his timeline since he went from having 32 minutes to 3 minutes to live when he came out of the Tardis.  He also has a new sonic device, which is interesting because I didn’t think he could just whip one up that quickly.  The Doctor also appears to have a stronger connection with River when he comes back.  He may have been kissed by her at the end of ‘Day of the Moon’ and found out who she is, but he still didn’t know who she was to him at that point in his timeline (at least, I don’t think so… not truly).

The most interesting thing I found from this episode is the 32 minutes to live bit of information.  In ‘The Impossible Astronaut,’ the coordinates tell Amy, Rory, and River to meet at 4:30 p.m. and he dies at 5:02 p.m.  Coincidence? I think not.

making mell river song was a great idea stephen, i got to say it was a great way to start a new series, really enjoyed it my whole family love the bit when the doctor tells rory to put hitler in the cupboard, doctor who is getting better by the second, come on lets keep the good comments coming can’t wait for next episode.

I have a couple things to speculate on in this episode.
First, I believe that the Doctor is quite a bit older in his own time line when he picks up Amy and Rory than he was when he left them at the end of the last episode.  His connection with River Song seems a lot stronger and I believe that he must have spent more time with her than we’ve seen so far.
Second, River Song makes a comment about not being able to kill her while she’s re-generating.  Isn’t this the opposite from the episode where the spacesuit kills the Doctor?  In that one she says if he’s killed while re-generating that it become permanent.  Will be interesting to see what becomes of this contradiction.  Or a red herring?

@Karen I think it’s more that if the regeneration is interrupted, then that’s it - you’re dead.

After you’ve just regenerated, you have all this Regeneration energy in your system so for a short time can heal from just about anything (DT grew back a hand, for example).

Regarding the episode, I felt that it was a waste of a great backdrop.  Nice to see some resolution on River Song, but it was all a bit rushed, and they could have done something with pre WW2 Germany and Hitler, but instead pretty much just ignored it.  The justice robot was an annoyance as well - no real information, and it doesn’t seem like it served a purpose (at least not one that couldn’t have been done just as easily by a flesh and blood person).

This piece was a lifejacket that saved me from dorwnnig.

Thank for informations, I am extremely impressed you write style

Hiya, I’m really glad I’ve found this info. Nowadays bloggers publish just about gossips and web and this is actually irritating. A good blog with interesting content, this is what I need. Thanks for keeping this site, I’ll be visiting it. Do you do newsletters? Can not find it.
———————————————————————————
lightsmade.com