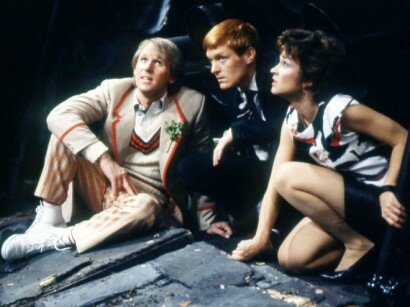 There’s a tendency to think that the celebrations for Doctor Who‘s 20th Anniversary ended with the broadcast of The Five Doctors in November 1983. But that wasn’t really the case. Just over a month later another season of Doctor Who began broadcasting, the 21st in total, which effectively kept the celebrations going. Another 22 episodes of Peter Davison as the Doctor, and then suddenly in March of 1984, there was a 6th Doctor - Colin Baker, who got a whole story to himself at the end of the 21st season. On screen the changes came fast and furious - three stories in a row (Resurrection of the Daleks, Planet of Fire and The Caves of Androzani) a regular cast member left, while two different ones joined. Fans and viewers said goodby rapidly to Janet Fielding, Mark Strickson and Peter Davison - and in fact they said hello to Nicola Bryant as Peri at the same time as saying goodbye to Turlough.

While ratings held steady in the UK, the show just got more and more popular in North America. In my particular corner of the world, Doctor Who was now being broadcast a remarkable 8 times every 7 days. This was long before the idea of a specialty cable channel doing a “marathon” of episodes of one particular tv series became fashionable. There were still not that many channels available on regular cable (even if “pay tv” was now making inroads) in comparison to today (although we had a lot more than the 4 regular channels that the UK was now “up” to). The local PBS station broadcast one episode every weekday at 6pm while also showing an entire Doctor Who “movie” (ie. all episodes from a story edited together) on Saturday afternoons, usually starting at 4pm. They would end at 5:30, then you’d have a couple hours off before TVOntario broadcast another episode on early Saturday evening, which they would repeat Thursday evenings (which meant on Thursday nights you had even a shorter break between episodes). Target novels were now starting to proliferate like never before - if I missed a Saturday broadcast of an entire story that I hadn’t seen before, I could walk down the street to my local convenience store and buy the target novel of the new Peter Davison story that I had missed (note, I did this for both Snakedance and Enlightenment - my family did not get a VCR until late summer 1985). Heck, that’s something that I can’t do today (even substituting Target novels for DVD releases).

1984 was the first year that I discovered and bought Target books, and actually the first time I owned a piece of Doctor Who merchandise - all inspired from seeing a PBS pledge break during Mawdryn Undead where one of the gifts that you could receive in return for your pledge was the novelization of that very story. It seemed so incredible to someone about to turn 12 - if I was to go out and buy a novelization of a Doctor Who story, I could re-read it again and again and again and re-live the experience of the story again and again and again. Nothing seemed so exciting! By the time the story had finished broadcast that Saturday afternoon in the summer of 1984, Doctor Who had become my favourite show and I knew that it was always going to be. And that’s why for this Doctor Who fan, 1984 was perhaps the best year ever to be a fan of Doctor Who.

Of course, everyone forgets Kamelion.

well, Eric, considering The Doctor, Tegan , and Turlough never gave him a second thought until 6 stories later, why should we?