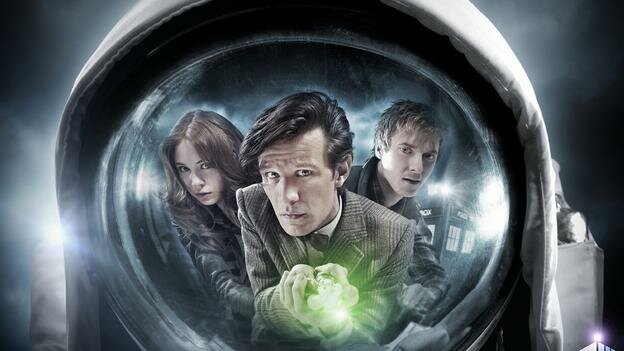 When will the next season of Doctor Who begin?
BBC1, BBC America and Space will all be broadcasting the first episode of the new season, The Impossible Astronaut on Saturday April 23 (in the UK, US and Canada respectively) It marks the first time that transmission of new episodes will take place on a national basis on both sides of the Atlantic.

How many episodes long is the new season?
Thirteen 45-minute episodes. However, the season will have a split transmission – seven episodes starting April 23rd, then the remaining six starting in September.

Who is writing the new episodes, and what are they called?
Episode 1 & 2 The Impossible Astronaut/Day of the Moon (two-part story written by Steven Moffat)
Episode 3 – The Curse of the Black Spot by Steven Thompson
Episode 4 – The Doctor’s Wife by Neil Gaiman
Episode 5 and 6 – The Rebel Flesh / The Almost People  by Matthew Graham
Episode 7 – A Good Man Goes To War (Part one of a two part story by Steven Moffat)

Who is starring in the season?
Matt Smith returns as the Doctor, along with his companions Amy Pond (played by Karen Gillan) and Rory Williams (played by Arthur Darvill).  Alex Kingston will also be returning to guest star as River Song.

Are new episodes of Torchwood being made?
Yes. The series still stars John Barrowman as Captain Jack, Eve Myles as Gwen Cooper and Kai Owen as Rhys Williams, but as the new season is a UK/US Co-production, they are being joined by American actors such as Mekhi Phifer, Bill Pullman and Alexa Havins

When will Torchwood series four air in Canada and the US?
The fourth season, entitled Miracle Day will air in the summer in between the two halves of the Doctor Who season. The season is ten episodes long, and is a BBC1/Starz Co-production. It will air on Canadian television on Space, though the airdate is TBA

What about The Sarah Jane Adventures, is that still going?
Yes, production has already been completed on the first half of the fifth season, expected for broadcast on BBC1 in Autumn 2011. Previous seasons have been shown in Canada on BBC Kids, but a broadcast of the fifth season on that network has not yet been announced. The series still stars Elisabeth Sladen as Sarah Jane, along with Daniel Anthony as Clive and Anjli Mohindra as Rani (not the same character as The Rani from Doctor Who). Tommy Knight and John Leeson (as the Voice of K9) are also still involved.

Speaking of K9, is it true that the long-mooted K9 spin-off series has finally been made?
Yes. A first season of 26 episodes (with K9 voiced by John Leeson once again) was shown in Australia in 2010. It has also aired in the UK and throughout Europe but not yet in North America. A second season is in development (but has not begun production) with an expected transmission for 2012.

Will Space or BBC America be airing this?
There are no known plans to do so.

Is the new season considered Series 6 (of the new series) or the 33rd Season of Doctor Who, or Series Two of the Matt Smith era?
According to Steven Moffat, you can pretty much call it what you like – all the numbers above have validity to them. The production team are, as part of their internal branding, calling it “Series Two” as it is there second series of production (taking over from RTD and his team) but nobody else seems to be. The DVD box set will likely continue the sequential numbering that started with the first season of the new series (ie. “The Complete Sixth Series”)

Are there going to be any more episodes produced after the 2011 season?
Nothing official has been announced, but we can’t imagine the BBC not doing so, given how incredibly successful the new series has been.