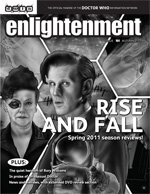 Chronic Fatigue
Cameron Dixon apologises for the lateness of this issue, and suggests that this is the most fan-friendly season of the revived series to date.
WhoLine
The latest news from the worlds of Doctor Who, Torchwood, and The Sarah Jane Adventures.
Fluid Links
Robert Smith? the opening episodes examines in a surprising manner of the series.
Spring 2011 Review
Greg McElhatton isn’t terribly besotted with The Curse of the Black Spot.
Block Transfers
Julie Chaston praises our discovery of The Doctor’s Wife.
Love and Monsters
Friends, Romans, countrymen; Deborah Stanish comes to praise Rory Williams, not to bury him.
Crater of Needles
Gian-Luca sees no need to vent his spleen about The Rebel Flesh.
LionHearted
David J. Lamb bemoans the loss of one of the classic series’ characteristics: the Doctor’s asexuality.
The Tempered Schism
Peter McAlpine follows a good man to war, and finds that it’s not as problematical as it appears.
The Land of Fiction
Graeme Burk reviews The Complete Fifth Series on DVD—as well as The Ark, Planet of the Spiders and Terror of the Autons, The Awakening and Frontios, and The Sunmakers and Paradise Towers. Plus, reviews of the April 2011 Eleventh Doctor novels, the Lost Stories Animal and Earth Aid, the BBC graphic novel The Only Good Dalek, and Time, Unincorporated: Volume 3.