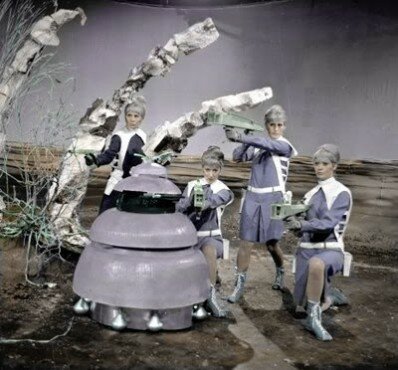 Beatlemania may have broke out in 1964, but, in the UK at least,1965 was the year that Dalekmania hit. On television the Daleks featured in yet another two sequels - The Chase, and The Dalek Master Plan. In between those two stories was a one-part story which was really a prequel to the mammoth 12-part Dalek Master Plan (which only had 7 of its episodes in 1965, the other 5 being broadcast early in 1966). That one-part story, Mission to the Unknown, featured the Daleks but not the Doctor or any of his companions. 48 years later it remains the only Doctor Who story - or single episode - to do that (think of it - with all of the double-banking of episodes (ie. filmed at the same time) that have occurred in the new series of Doctor Who they have never tried something quite as radical as an episode without any of the regular cast, even when there was a good production reason for it). They were able to attempt and achieve this (without any harm to the series’ fortunes) with Mission to the Unkown because of how popular the Daleks were in mainstream culture in Britain. 1965 was the year that Doctor Who merchandise also took off, with again the Daleks leading the way. Oh yeah - they also make a Doctor Who movie this year, also featuring the Daleks, a colour, big-screen adaptation of the very first Dalek story.

Because 1965 is often remembered for being the year of “Dalekmania”, many other significant achievements and milestones from this calendar year often get overlooked. We mentioned that 1965 saw Doctor Who hit the big screen for the first time, but what is also notable is that Peter Cushing (and not Patrick Troughton as is often assumed) became the second actor to star as Doctor Who (or “Dr. Who” in this case), making it the first time somebody other than William Hartnell was known for playing the character. Speaking of actors, 1965 also saw the first appearance of the actor who (at the time of writing) had the longest association with Doctor Who on television - Nicholas Courtney, who appears as Bret Vyon in the first four episodes of the aforementioned Dalek Master Plan, an association that would last on television all the way to 2008 (!) when he appeared for the final time as the Brigadier in The Sarah Jane Adventures story “Enemy of the Bane” - 43 years after he first appeared in the Doctor Who universe on television, with many appearances on television with many different Doctors (and a few more on audio) in between. Such an impact that Nicholas Courtney would have as the Brigadier that the passing away of Courtney in February 2011 was effectively acknowledged on television in 2011’s season finale, The Wedding of River Song, and hopefully he will, along with Hartnell, Troughton and Jon Pertwee, get acknowledged again in some way for the 50th Anniversary special later this year.

The two most recently recovered William Hartnell episodes into the BBC archives both come from 1965 - Day of Armageddon (episode 2 of The Dalek Master Plan, and featuring Nicholas Courtney in his earliest surviving Who episode) and Airlock, episode 3 from the Season 3 opening story, Galaxy Four. That episode is going to be released in North America in March (with a special edition of The Aztecs as an extra - or at least that’s how I look at it), giving many Doctor Who fans a new William Hartnell episode to enjoy. 48 years later, the Airlock has been opened.

Recent research has only confirmed my suspicion that the Dalek’s Masterplan was intended to be a massive Christmas publicity junket, and that Controller Huw Weldon didn’t mind that Terry Nation and his proxies took good storytelling out behind the woodshed. It’s the story I love to hate, I hope they find some more of it.