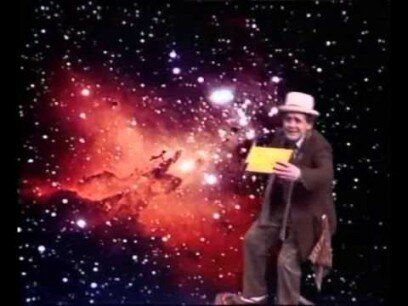 1990 holds a unique spot in the 50 years of Doctor Who‘s history, albeit it is difficult to argue that it is gloriously unique. It was the first year that there were no new episodes made or broadcast since the show was created back in 1963. And unlike every other year since then, it didn’t feature brand new fiction in the form of novels - there were a few Target novels which published in 1990, but the Virgin New Adventure series didn’t start publishing until 1991. The Big Finish audios would not start until 1999. 1990 therefore featured the biggest absence of new Doctor Who in its 50 years to date.

So what did it feature? Well, the Doctor, Ace and K9 did film new scene in-character for a children’s science program called Search out Science (the Doctor Who episode of which was called “Search out Space”). This was the only new “in character” footage for Doctor Who on television this year and the last until the 30th Anniversary specials in 1993. Doctor Who Magazine continued to publish its comic strip in its regular issues, making it the only continuing form of professionally published new fiction for Doctor Who. The more “professional” fanzines like DWB and The Frame also continued. So did regularl club fanzines (such as Enlightenment) though there were fewer of them. Nevertheless the appetite for fans to read and discuss Doctor Who did not diminish with the lack of new episodes - in fact, for many people it increased, with people getting their Who “fix” either from publications like Doctor Who Magazine or from VHS releases of classic stories (well, they were all classic now) - sales of each were brisk. North American fans perhaps felt this “lack of new episode” hunger less quickly than the UK fans, mainly because most fans in North America didn’t see Season 26 until some point in 1990 (or not at all, now that PBS stations had, through no fault of their own, been unable to meet up with the demand for new episodes to show to fans and the exorbitant prices the BBC were still charging, it meant that they started “dropping like flies” (in terms of carrying the series) in the early 90’s.

Pretty depressing, right? Well not quite. At the time many were concerned about the lack of an announcement about the show’s future and the lack of new episodes being made, but the BBC, keen to avoid the public outrcy that had occurred in 1985 when they last tried to cancel the show, never officially announced a cancellation. So many fans were of the belief that it might only be another year or two before the show came back, particularly because we kept hearing seemingly every week that another independent production company led by a former Who writer, producer or script editor had made a bid to the BBC to produce or co-produce the show for them. It was only towards the end of 1990, after over a year of not hearing anything positive come out of any of this,  that the fan campaigns started to heat up in earnest to get the BBC to at least make a positive announcement about the show’s future, if not get them to make the show once again.

Behind the scenes, there was a co-production deal invovling Philip Segal that would end up having the greatest impact of all of those bids, but none of the fans knew about that. The fans were, like it or not, getting used to the idea of there being no new Doctor Who on television. What they didn’t know was that 1990 would only be the first of such years - but the positive in all of this is that the fans would start to prove in 1990 that they could retain their interest and keep the show alive without any new episodes, until the time it was ready to come back.