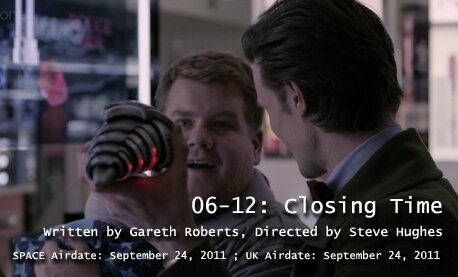 The Big Idea: The Doctor’s decided to visit his old friend Craig Owens one last time, and that’s all he’s doing. He’s definitely not here to notice the flickering lights and residual teleport energy in Craig’s neighbourhood, or the people disappearing from the local department store, or the scurrying metal rat in its toy department, or anything else that suggests the Cybermen might be invading…

Some Quick Bits of Trivia: Gareth Roberts has written several episodes of Doctor Who (including last year’s The Lodger, which this story is a sequel), as well as original novels, comics and audio plays. James Corden and Daisy Haggard also reprise their roles from The Lodger. Val is played by Lynda Baron, who played Captain Wrack in the classic series’ Enlightenment and sang “The Ballad of the Last Chance Saloon” in The Gunfighters.

Did You Notice… The final five minutes of the episode all belong to the story arc, picking up on River Song’s story after Let’s Kill Hitler, reintroducing Madam Kovarian and the Silence, revealing the identity of the impossible astronaut, and leading into next week’s season finale. The “tick-tock” song first heard in Night Terrors recurs here, this time with more immediately significant lyrics…

Not to Complain, But… Why does the sonic screwdriver now have visible zap rays coming out of it? It’s not a weapon, people.

All Things Considered… It’s by no means perfect. The ending is laden with more sap than a year’s supply of Belgian waffles, and the episode as a whole is an easy example of the disturbing gender politics that underlie this entire season. But when you get down to it, the story as a whole lives or dies on the bromance between the Doctor and Craig Owens, and that’s still as strong as it was back in The Lodger. It’s nice to see that Craig’s character has developed while staying true to his first appearance; he’s bewildered and he’s out of his depth most of the time, but he’s still brave, and he’s loyal, and he listens to what people are telling him and tries to do the right thing. You can see why the Doctor would choose Craig as his subject when he experiments with dropping in on an old friend to say goodbye; he deserves it.

Craig’s affability isn’t just welcome, it’s necessary. There’s an underlying melancholy to the whole episode, what with the Doctor’s imminent death looming over him, and Craig’s well-meaning, bumbling friendliness is needed to both undercut and enhance the tension. It’s not the despair that hurts, it’s the hope; we don’t want the Doctor to go, but if the Doctor’s penultimate hoorah had been a hopeless, bleak brush with failure, we’d have had no reason to want him to stay. Having good people like Craig in the world shows us why it would be a terrible thing to leave it, and that’s why his innocent happiness as he hands the Doctor a significance-laden Stetson is such a heartbreaking thing to see.

We’ve seen the ending done before, and better, three weeks ago in Night Terrors, but one could argue that this isn’t a coincidence or a mistake. Neither are these the only examples this season of a relationship between a parent and child. Given the revelation of River Song’s identity—or rather, the identity of her parents—this has got to be a deliberate echo of themes across the whole of the season. Perhaps next week, the season finale will hinge on the Doctor’s life being saved because River is redeemed by Amy and Rory’s love for their daughter.

There’s no real reason to go into detail about the episode’s flaws here; most of them, admittedly, are representative of problems with this season as a whole, rather than this individual episode. Closing Time is fun, it’s silly, it’s witty (“Alfie, why is there a sinister beeping coming from behind me?”), and at this point in the season, knowing how high the stakes will be next week, that’s just what we need.

Line of the Week: “You destroyed them because of the deeply ingrained hereditary human trait to protect one’s own genes, which in turn triggered a, a… Yeah, love. You blew them up with love.”

The story goes on… (Special spin-off issue!): Torchwood! The Sarah Jane Adventures! K9: The Series! Plus: