Yellow is the new Black -  A UFC Special Announcement

Zanak?  ZANAK!  Dust ball of the galaxy! ...and in the span of one week we see another UFC team seek their fame and fortunes in the Octagon. First it was Queen Xanxia’s announcement of her pending brawl with Binro The Heretic.  This time it’s TEAM MENTIAD who will, for the first time in UFC history, enter the ring together as a single unified force for UFC’s first ever Royal Rumble Caged Thunderydomey Special Event! 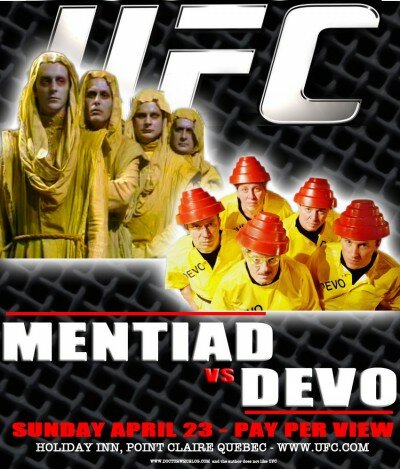 Their opponent?  DEVO!,  the American New Wave band from Akron Ohio.  In a recent interview Devo said [the fight] “is a dream come true, and the culmination of years of road and studio work.  Our first album asked the question ‘Q: Are We Not Men?  A: We are Devo!’  That album was a call to arms.  A challenge to all!  The robed hippies of Zanax are but a speed bump on the road to our glorious ultimate victory in the ring.  We’ll send those pasty faced sandal wearing, time-dam destroying prog-rockers back to their hollow planet in a de-evolved disgrace.  They will wish they’d never heard the sound of Devo.  Whip It?  Bah…  We’ll Whip Them good!”.  The blustering boastful rants of the band continued well into the night.  Word has it they continued their tirades even after the media went home.  The Mentiads only had this to say: ” Granola.  We seek Granola.”  A bold and shocking statement to be sure.  This may very will be the UFC Match of the decade.

The match will be shown Live on Tavern TeeVee as a Pay-Per-View Special Event.  ORDER NOW.

The Mentiads have brought down the game.  When they’re not being continually tested for Vraxoine, they’re demanding salaries out of this universe. Apparently Zanuck had to rebuild the time engines and start plundering again just get through last season. Things were better under good Queen Xanxia I tell ya!

Sadly the real losers in this situation were the ice cold Calufrax Crew.  They were on the top of their game, fit to fight all comers, and feared by the entire UFC universe…  until they and their entire planet was crushed down to trophy the size of a football by the Mentiad’s hollow planet.  But with the limited number of rules that govern the “sport” known as UFC it was deemed a legal move. Queen Xanxia was rewarded with a special MMA championship belt with a variable atomic weight.

I have no idea what you’re on about.  This is sports, right?

Don’t count Calufrax out yet.  Apparently time is scheduled to be rewritten and they will have a shot in the SPL (Stolen Planet’s League). Sure it’s not the big time, but they’ll easily take out Klom and the Adipose breeding planet early on.

I’ve heard whispered rumours of this lower level league making a comeback.  Do you think that Granados, and Bandraginus V, Xanxia’s other shriveled planets, will also make the cut?  If so then perhaps one of them might win promotion and seek revenge in the Octogon sometime in the future!  Who will they face The Mentiads or the Queen herself?

My money is on Granados. Bandraginus V has never supported their professional teams adequately. All their money goes into the arts. Apparently, Oolion miners, like the functionaries on Inter Minor, require a hell of a lot of distractions.

And Granados versus the grand dame herself, well, time itself would stand still to behold that match…

Thanks for the sharing I know this is kind a off topic however , I’d figured I’d ask. Would you be interested in exchanging links or maybe guest writing a blog post or vice-versa? My site goes over a lot of the same subjects as yours and I believe we could greatly benefit from each other. If you might be interested feel free to shoot me an email. I look forward to hearing from you! Superb blog by the way!