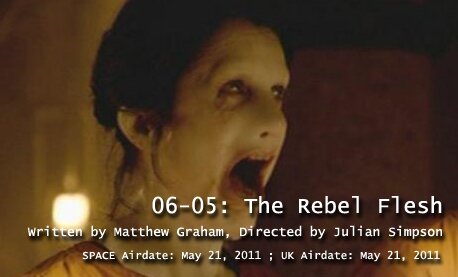 The Big Idea… A solar tsunami sweeps the TARDIS to a tiny island on Earth in the 22nd century, where human doppelgangers are used for the dangerous work of acid mining. But when a power surge from the solar storm causes the Gangers to separate from their human originals, the Doctor is caught between the people and the almost people, trying to prevent a war…

Some Quick Bits of Trivia: This episode was written by Matthew Graham, who wrote Fear Her for the 2006 season and co-created the series Life on Mars and Ashes to Ashes—both of which featured actor Marshall Lancaster, who appears in this episode as Buzzer.

Did You Notice… The Doctor is definitely hiding something; he seems eager to rush Amy and Rory out of the TARDIS at the start of the adventure, and there are hints dropped throughout that he knows something about the future of the Flesh and may not have come to the monastery entirely by accident. Did he intend to create a clone of himself from the Flesh, perhaps suspecting what lies in store for him in The Impossible Astronaut? Or is it something to do with Amy’s mysterious simultaneous-tea-and-no-tea pregnancy, which is again referenced in the opening scene? Meanwhile, the woman with the eyepatch continues to keep an eye (presumably, her good one) on Amy.

Not to Complain, But… The “solar tsunami” is described as doing a lot of damage to this one isolated island, but the crew still seems to be expecting rescue to arrive from the mainland. Frankly, the Sun is somewhat larger than it looks in the sky, and the storm looks powerful enough to have major worldwide consequences. On a less significant note, after the Doctor’s disastrous attempt to introduce the Gangers to their originals, Jennifer-2 claims that Buzzer-2 warned them that it was a trick… presumably in a scene that joined Avery’s boatswain on the cutting-room floor.

All Things Considered… There are some story themes that Doctor Who keeps returning to, and The Rebel Flesh stitches together pieces of Blade Runner and John Carpenter’s The Thing to take on two of them: the base under siege, and the Doctor as mediator. But while there are moments where this episode literally goes back to the well and serves up reheated leftovers, it doesn’t do either metaphorically. The story efficiently establishes our sympathies for the characters before all hell breaks loose, and once that’s in place, we can sympathise with both sides in the affray—and that’s where drama comes from. The Doctor’s distress is clear; though we have yet to discover the extent of his foreknowledge, the script and acting successfully convince us that the Doctor can see a potential tragedy unfolding here and wants desperately to re-fold it.

The acting is strong on all fronts. Sarah Smart sells not only Jennifer’s early timidity, but her Ganger’s distress and subsequent rage. Raquel Cassidy also pulls out some interesting choices in her portrayal of both versions—or aspects—of Cleaves. In both cases, what may seem at first like inconsistent characterisation in fact highlights the characters’ depths; Cleaves’ dogmatic bullying hides a basic insecurity and self-loathing that comes out in her Ganger, while it’s easy to see how Jennifer’s shyness and poor self-esteem could, given the wrong circumstances, easily curdle her into someone who keeps human heads in the refrigerator. The originals’ and Gangers’ mutual fear is portrayed well, especially when we see the Jimmys nervously beginning to accept each other. If only.

If there’s a problem with this episode, it’s that Dicken’s sneezing seems far too obvious a plot point; your reviewer will be quite disappointed if, a bit later on, someone does drink that Hexachromite and become an axe-wielding homicidal maniac. But overall, this was a strong first episode—fast-paced, witty and disturbing, using the familiar themes of Doctor Who in a fresh and exciting way. It’s as if Matthew Graham was told to deliver a moral dilemma with scary monsters, watched The Hungry Earth, and spent the next 45 minutes slapping Chris Chibnall about the head with his script. If the follow-up is as strong as the set-up, this will be a candidate for your reviewer’s favourite story of the season.

Line of the Week: “I’ve got to get to that cockerel before all hell breaks loose! I never thought I’d have to say that again.”