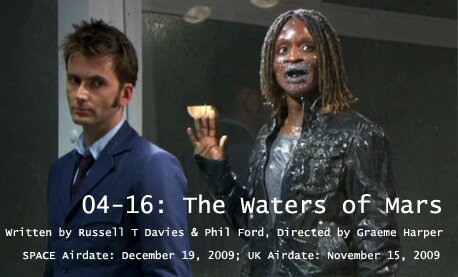 The Big Idea:The Doctor arrives on Mars at the site of Bowie Base One, humanity’s first colony on the red planet. He’s powerless to stop a terrible tragedy…and then things get darker.

Some Quick Bits of Trivia: Bowie Base One was named for singer David Bowie who penned and recorded the classic song “Life on Mars” on his 1971 Hunky Dory album. There is a humorous reference to an organization called the “Branson Inheritance” which pre-supposes that British businessman extraordinaire, Richard Branson, will leave a legacy related to his space travel aspirations. The special was dedicated to former producer Barry Letts who died earlier this year. Letts was a beloved producer, director, and writer who left an immeasurable stamp on the world of Doctor Who.

Things to geek out about:

Not To Complain, But… The cliffhanger before the credits was a little lame and belied much of what was to come, but then again perhaps it was Davies’ intent to lull the mainstream audience into a sense of cutsie calm. The “gadget-gadget” robot was probably annoying to most adults, but kids may have found it amusing in a Short Circuit kind of way. The portrayal of the possessed humans was often unintentionally funny rather than creepy, in particular Sharon Duncan Brewster’s mugging as Maggie. All the projectile water kept evoking vomit scenes from “Family Guy”.

All Things Considered… Boy was that dark. The task put to Russell T Davies and Graeme Harper was a complicated one. Playing with viewer’s expectations of how a Doctor Who story should unfold, and subverting them. The Doctor’s traditional role is to enter the scenario and save the day (past stories like Midnight, Turn Left or even Revelation of the Daleks have played with the idea and subverted it for good or ill). Davies follows up on his “fixed points in time” concept from The Fires of Pompeii and ramps it up in terms of actions and consequences.

We got lots of familiar beats for a Davies era story: the ordinary feature of life made dangerous (water), the cute gimmick (robot), base under siege (more of an all time Doctor Who setup), the “getting busy scene” with bracing Murray Gold score and Graeme Harper precision direction—we even have the whimsical snow. We’re meant to feel we’re in familiar territory. Our hearts respond accordingly. Yay, the Doctor will save the day. Everything goes by so quickly that one could almost miss the moments where something is not quite right. And then the familiar trappings are subverted in a quiet little scene on an ordinary street in anywhere’s-ville. “It’s bigger on the inside,” suddenly becomes a statement of fear rather than shock and awe. Nobody is thanking the Doctor.

As noted above, the great strength of the story is the relationship between Adelaide and the Doctor. It really binds the story together through the shifts in tone. The Doctor clearly needs to unload to her in the way he traditionally does to a companion, but conversely she isn’t a companion, she’s more like his equal, at least in terms of morality. The supporting case is quite good for the most part.

One could argue that the story would have benefited from more quietly creepy moments (like in The Impossible Planet), but like it or not, Davies clearly knew what he wanted to do. He choose Graeme Harper to direct it after all! And I think his direction certainly helps to move things along in an unconventional story that has a lot of talky bits that require visual diversion.

By the end, the stage is set up for Tennant’s two-part finale. The seeds planted in this episode promise an epic finish for the beloved Tenth Doctor.

Line of the week:   “For a long time now I thought I was just a survivor, but I’m not. I’m the winner. That’s what I am: the Time Lord victorious.