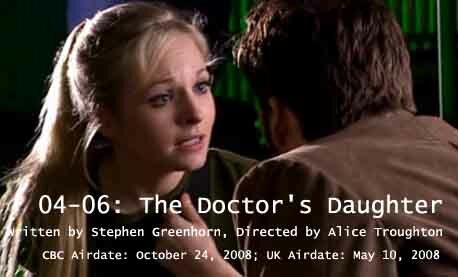 The Big Idea… The TARDIS kidnaps the Doctor, Donna and Martha and brings them to an alien world. Seconds later, the Doctor becomes a father again…

Some quick bits of trivia… Georgia Moffet is the real life daughter of Fifth Doctor Peter Davison, and at the time of writing is now engaged to be married to her co-star in this story, David Tennant (which would make the Fifth Doctor the Tenth Doctor’s father-in-law). Moffett’s character would not be killed off in this story due to a suggestion of fellow writer and soon to be Executive Producer Steven Moffat.

Not To Complain But… when the Doctor suggests they should wait to see if Jenny will regenerate, why is Martha in particular the one to discount the possibility given that she knows nothing about the process (never having seen it)?

All Things Considered… love it or hate it, this is a memorable episode. Not counting The Five Doctors, it is the first time we see a family member of the Doctor in an episode since 1964 – some 44 years previous.

Georgia Moffet steals just about every scene that she’s in, and they could have spent an entire episode with Jenny, the Doctor and Donna stuck in cell or distracting and escaping from guards and it would never get boring. It’s a shame that the character has, to date, not yet returned – such an important character (giving the Doctor a family member) warrants more than just a one-story history, and she had great chemistry with her co-stars (in the case of David Tennant, this turned out to be especially true as it extended off-screen as well!)

While the scenes with the Doctor, Donna and Jenny are uniformly superb and keep the episode rolling, poor Martha gets a raw deal. It’s difficult not to think that the character’s presence here is only to fulfill a contractual obligation because her sub-plot is fairly redundant and the Hath scenes would have worked just as well without her. Martha’s only contribution appears to be to get one of the Hath killed, even though it is not entirely clear why the Hath in question wouldn’t just get up and walk out of quicksand (or whatever it was) given they are fish-like creatures who appear to breathe liquid that they carry around with them anyway).

It is good that Jenny eventually survives and regenerates into herself (no doubt a side effect of having a singular parent?), as it makes the somewhat cheesy self-sacrifice somewhat more palatable. Some may feel there is too “much holier-than-thou” moralizing by the Doctor after Jenny’s “death” but the ending is memorable and is helped by an outstanding performance by David Tennant who convinces us how much he cares for a daughter he’s only known for a few hours.

Outside of the Doctor’s Daughter herself, the plot is quite straightforward and traditional for Doctor Who – a new colonist world that warring factions, with one of the factions having an erroneous religious faith. The twist with how long the war has in fact been going on in an excellent one which helps to ensure that the plot isn’t a mere re-tread of episodes of yore. The episode is really about the title character though, and seeing what the Doctor’s reaction might be when faced with a new family member and one that is a little more trigger happy than he is. It’s an interesting idea and it is actually a shame that its exploration is rushed into a 45 minute story – it’s an idea that could easily fill 90 minutes.