DWIN > Doctor Who Blog > Into the Capaldi Era

Into the Capaldi Era 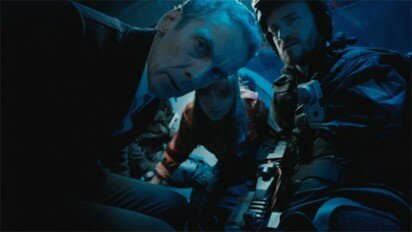 What did you think of the 2nd episode of the season and the second 12th Doctor story? It’s the episode that aired August 30th, if you would like to have a few words (as the 12th Doctor might say) about what you thought, please enter them in the comments section. Is this season Heaven so far, or just leading to it? Whether you were tickled Pink by the episode, or are disappointed with the era so far, we would like to hear from you.

Really not scary enough for a Dalek episode, but pretty classy for a Fantastic Voyage retread.

Great episode!
Intriguing revelation - a Dalek consciousness regards the Doctor as a “good Dalek” - has just as many bad connotations as good.
Missy is a brilliant Who character - almost hope she’s a new character. She reminds me of Mantrid from the Lexx series - his robot arms would appear at the end of an episode to destroy the world that the crew of the Lexx had just visited.

....and if the good folks here will allow me to further expound apoun the Missy Character after I had a day to digest ” Into the Dalek”....
I was contemplating who’s conciousness was placed into the pocket watch that the Doctor had traded for foul smelling clothes in “Deep Breath”- I concluded that the doctor had motive and opportunity to place River Song’s conciousness into the watch at Trenzalore in “Name of the Doctor. She was a disembodied conciousness and he was dreading saying goodbye to her - and the Doctor had downloaded Rivers consciousness once before - to the Library computer in “Forest of the Dead” - and the Doctor had the perfect chance to do it at Trenzalore when he was dancing with her.
All this doesn’t mean that Missy is River but I find it interesting that Missy seems to be downloading the consciousness of characters who died in episodes one and two of the current season in much the same manner that the Doctor downloaded Rivers consciousness - possibly twice.
Just throwing it out there.

Missy say “Welcome to Heaven”. We have no reason so far to doubt her sincerity. I’m taking her and her environment as a new situation and not a retread of something we’ve seen before until we learn otherwise.

Overall I liked the episode. Clara’s uncertainty about the new Doctor continues. Is that teacher (Pink?) going to become another Rory, Mickey etc.? I hope not.  Great reference to Fantastic Voyage, the movie. Next week’s episode looks like the season’s obligatory trip back into history. They’re usually good for a laugh.

Bill - I’m not saying that my theory on who Missy is -is a “done deal” - but I am saying that all the evidentiary items presented in the first two episodes of season 8 do seem to point in a certain direction - but Steven Moffat tends to share the Doctor’s first rule in that both Steven Moffat and the good Doctor lie.
“Welcome to Heaven” - Missy could be sincere with this statement but knowing the Doctor Who universe the odds are greatly against this being the case - there will most certainly be a scientific explanation of “Heaven” here - whether it is a pocket universe containing digital consciousnesses or they maybe the trans dimensional “Eternals” - if Missy is an Eternal then that would open up a whole new and interesting can of Who worms.
Having said all that - I am quite positive that someone’s consciousness was in that pocket watch that the Doctor traded away.

one detail I liked about this episode - how Phil Ford managed to fix a plot hole which happened in “Destiny Of The Daleks”.

In it, the Fourth Doctor posited that the Daleks’ computer minds couldn’t counter attacks from the Movellans without always ending up in a stalemate. Of course this was noticed and commented on, due to the Daleks’ internal organic nature. Ford’s giving the Daleks a supplementary electronic brain fixes that gap nicely.

It also shows how much care Davros put into putting a failsafe into the Daleks to never question their basic directive - too bad he forgot to program in “obey your creator without question, don’t exterminate him”

I’m a sucker for Dalek stories, and I think this was one of the best ones in a long time.