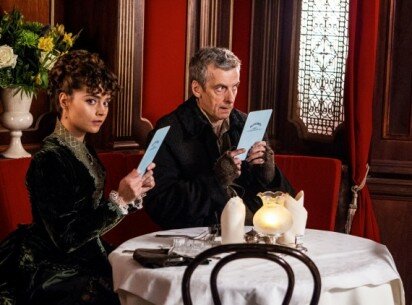 << Look over there! It's a new season approaching!

Into the Capaldi Era >>

Overall, good in patches but wasn’t impressed overall. Major point: get rid of the sex - we don’t need overt eroticism or controversial relationships. Some funny bits, some well-acted bits. Strax does it well in this one - funny. Too many ridiculous lines - keep it down and anchor the story better. Didn’t like Vastra’s harsh chiding of Clara. Unfrightening bad guys - who gets threatened by clockwork moving slowly? Great new titles and music arrangement; unsettling to have a Doctor Who who doesn’t convince us he’s worked it out or show much potential of his former brilliance. Lacked emotional punch - it didn’t hit the target for me. Get rid of the sex! This is a family show.

It was good, but I think I expected more. We had a group of twenty over to watch it, and the overall response was sort of hesitant. The number one complaint was that they way overdid the justifying his age throughout. People did like the slower pace, feeling that the new era had gotten a bit schizophrenic. I maybe expected more from Ben Wheatley in the direction department, but that said, I liked the close quarters filming of much of the show. Capaldi was good, but the episode took too long to get to his character (post regeneration trauma is tradition, but it’s wearing thin). Clara was marginally better, having thrown off the impossible girl yolk, but it’s hard to see how she is having such a hard time with regeneration when she’s been through the Doctor’s entire timeline. Unlike Ben’s post above, keep the sex

Get rid of the sex! Kids don’t need to see people kissing.

> Get rid of the sex! Kids don’t need
> to see people kissing.

Respectfully, I disagree.  If we “protect” children from everything, they’ll grow up broken.

“controversial relationships”? - What we really don’t need is people prejudging - nothing controversial about a committed relationship between two consenting adults. Sounds like someone jumped into a TARDIS and set the “wayback” machine to the 1950’s - a time where puritanical zealots stuck their noises in other peoples business - made peoples lives hell because they didn’t follow the narrow parameters of what the puritanical zealots called a normal and expectable way to live a life - which would be an egregious hell to bare through and runs absolutely counter to everything the “Who” universe is all about.
Anyway - the show and Peter Capaldi where great - I like the new, slower pacing - it’s more conducive to ideas being allowed to “breath” and take root. Capaldi and Jenna Coleman had great chemistry - it was entertaining to watch these two characters tentatively skirt around each other trying to figure each other out - I liked the bickering.
I think that Capaldi will be a doctor that quietly and independently examines the different mystery while others bash about to provide a diversion - when the Capldi/Doctor has sufficiently scoped out the mystery he will than set his plan in play.

Oh - one more thing - The Doctor traded his pocket watch for some foul smelling clothes. We know that TimeLords can contain their consciousness in such pocket watches. Was their a TimeLord consciousness in the watch - the new Doctor wouldn’t of remember there being as such .
That would be an interesting twist if the Doctor had kept the consciousness of The Rani in the pocket watch and was released and now The Rani has taken the form of of Missy.

Oh yes - the Doctor would of had a perfect opportunity to put River’s consciousness in a pocket watch when they said their goodbyes at Trenzalore.
It would be cool if River was also The Rani.

“It would be cool if River was also the Rani”
Well, there’s a use of the word cool I wasn’t previously aware of…

Keep the sex.  The days of the a-sexual Doctor are loooooong past.

If you didn’t latch onto this fact with the introduction of Jack Harkness kissing the Doctor and the Doctor kissing Rose and then the 10th Doctor snogging Madame De Pompadour and the 11th kissing Rory Williams, then I’m afraid you’ve got some serious blinders on.

Take them off please.

This is New Who.  And, for the love of Pertwee, it’s about time we get back to more adult story-telling.  Doctor Who is more than just a family show.  It very much can be an adult show and it shines best when it is doing just that:

BLINK, THE GIRL IN THE FIREPLACE, THE EMPTY CHILD, THE WATERS OF MARS, MIDNIGHT, THE FIRES OF POMPEII, DALEK…

Capaldi was FANTASTIC as the Doctor.  No warm-up period for me with him.  He instantly captures and embodies the Doctor.

The story felt a bit disjointed in parts and the T-Rex was a failed opportunity to use an awesome CGI to great effect.

But, mercifully, the tone was darker and I personally felt the Half-faced Man was effectively creepy.

So, while this was by no means as good as The Christmas Invasion or The Eleventh Hour, it was a decent beginning for Capaldi.

I wasn’t sure what to expect from this episode. After the glorious high of “The Day of the Doctor” and the depressing low of “The Time of the Doctor,” this could have gone either way. Instead, it was somewhere between the two - not as good as the former, but not as bad as the latter.

The performances themselves were good, with Capaldi playing the confusion and despair of the new regeneration very well. The writing was good, but not always sharp. (And must we have Steven Moffatt expressing his personal angst through the mouths of his Scottish characters?)

This little subplot - probably the season’s running theme - has me curious but concerned. On the one hand, I like a little mystery, especially involving someone who seems to be cleaning up after the Doctor; on the other hand, I’m not sure about this “boyfriend” referencing. Do we need a new relationship for a new Doctor?

As for all this kissing, I think I’m with the War Doctor on this one.

It would make zero sense if River where the Rani, since the Doctor and the Master both knew the Rani back in their Academy days.  Also, the Rani was an amoral Biologist, River is neither.

David:  I don’t think Missy is the Doctor’s girlfriend, I think she is just calling herself that.  Kinda getting an evil Rose vibe off her. (Not that I think she is Rose, just that she might be inspired by little Miss Obsessive Tyler.)

knowing someone “back….” ( at a previous time) is meaningless to time travelers and “Who” should expect nonlinear plotline thought processes from it’s viewers.
As for differing fields of study - why not - it’s not like multiple regenerations couldn’t change the interests of a conciousness.
The Doctor made a big deal out of telling Clara that he ” wasn’t her boyfriend” - odds are that this plot development has something to do with Missy declaring that the Doctor was her boyfriend.

awesome post dude, i hope you keep doing this work, like this was very useful for me thanks

hm its depend on him that what he thinks and we have to look at the possibilty. but still great post.

Who is writing these scripts a ten year old? It s an insult to the intelligence, i love to escape reality watching doctor who but come on. I have a seven year old nephew who sits and watches these episodes with me and he cannot believe it either. If you cannot get a seven year old to to watch and believe these ridiculous scripts ( the moon blows up giving birth to a planet sized being who then puts it back together, a forest that appears over nite then disappears in the blink of an eye with no collateral damage whatsoever) its bad enough we have a doctor who who looks like and acts like william hartnel the first doctor who but even that foo par could be forgiven if there was half decent scripts. I keep watching the same as every one else to see if it will get better but its not and your viewing public does not have infinite patience with either the worst ever doctor who( including the previous worst william hartnel) or completely non nonsensical story lines. The clock is ticking for doctor who and his directors and story writers and the ratings and viewing public will fall.

There is some writing like a ten year old on display here, Thomas, but we may not all agree by whom.

” I like Amy Pond - give her more screen time - I hate Amy Pond - it’s not the Amy Pond Show its Doctor Who - get rid of her - I like Clara - she’s a refreshing change from Amy Pond - Clara is getting too much screen time - get rid of her. I like Steven Moffat - he wrote my favourite episodes - make him the show runner - I don’t like Steven Moffat - he writes stuff that makes me think - I don’t understand it - I feel like a ten year old when I watch his stuff - get rid of Steven Moffat - get someone else in who will write simple stuff that I can understand.”
Most of us here have been following “Who” long before David Tennant - don’t get me wrong - I love Tennant but the show is so much more dynamic then just Tennant and Piper and Tennant and Piper would tell you exactly that if you were to ask them.

As someone much more eloquent than I once said, we are like the fans of the winning team complaining about the quality of the goal scoring.

Ratings for the current series remain outstanding, globally. The show isn’t going away.

Individual episodes succeed or fail on their own merits, but in total this series is the most daring since the show returned in 2005.

I don’t know Andrew - what you posted sounded pretty eloquent to me and it represents my thoughts on Who pretty dead on ( without the “irritable crank” favourings of my posts).
I agree - this new season is extremely daring and it’s good to see - Who should always be challenging the audience and the audience should always be willing to meet that challenge…..or move on to something else.