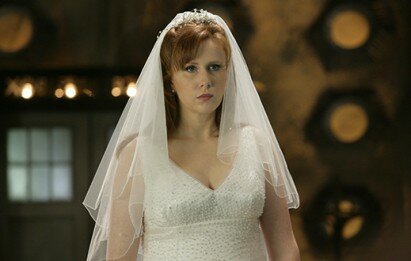 Before we start on Donna, we have to acknowledge that RTD-era companion departures overall are tougher to evaluate for the simple reason that all the companions come back not too long after they have departed. In the classic series days once they left, that was it - they were gone and we didn’t see them again unless they were a member of UNIT or unless it was many, many years later in a multi-Doctor story. With the RTD-era, every companion came back and not too long after they left. The longest gap was probably Captain Jack, who came back to the series two years after he departed it, mainly because he was busy starring in a spin-off series in the interim. This gives an added complication to consider as the known fate of the character in question changes shortly after their departure, which can change how we feel about the initial departure not very long after it originally happened.

In Donna’s case, we are treating her departure story as Journey’s End, but it is tough not to let the events regarding her re-appearance in The End of Time just a few stories later affect our judgment, particularly when there isn’t a regular companion in the 3 stories in between so the “Donna era” doesn’t really feel like it ends with Journey’s End but rather The End of Time. Either way, there are significant problems for her character development in both stories in question. In Journey’s End, her moment in the sun as the saviour of all universes comes about not because Donna chose to be special, chose to be heroic or brave, but because some magical force (or possibly the TARDIS) decides to bestow these special powers on her. (It doesn’t help that the practical result of her being bestowed such powers is to defeat the Daleks by pressing a bunch of buttons and spouting the most hideous technobabble imaginable at a mile a minute - even with the sub-titles on and watching my DVD in slow motion, I can’t make head nor tail of what it is that Donna does to defeat the Daleks).  Donna losing her memory of the Doctor and being forced to leave the TARDIS is truly heart-wrenching and extremely well-played by all the principle actors involved (David Tennant, Catherine Tate and Bernard Cribbins in particular) and “saves” the departure in some respects (which is why it is this high up in the list instead of being lower), but the character development leading up to this point is not satisfactory from a character point of view or from a plotting point of view.

Just a few stories later, The End of Time undercuts some of the tragedy of her departure, for a couple of reasons. First, it turns out that if she remembers the Doctor her mind won’t burn and she won’t die (as we had been told repeatedly up to this point) - she will instead just knock out a few people in her immediate vicinity and send her to sleep for a bit (a defense-mechanism which is so fool-proof that the Doctor can tell that this is exactly what has happened to Donna just by sounds that he can hear over the phone as he is tied up in a chair miles away). As well, it seems a shame that we are suddenly presented with the fiancee/husband rather than seeing this relationship develop.  After the torment that Donna went through in The Runaway Bride and Silence in the Library in trying to meet and marry the right guy (she has two marriages or attempted marriages that don’t work out in heartbreaking fashion), I wanted to see the story/journey of how Donna finally meets and successfully marries the right guy. We never get to really know who the guy is, what he’s like or how the relationship developed or whether he was truly right for her. Which can’t help leave me feeling somewhat unsatisfied and certainly that an opportunity was missed. All we are really told about him is that he doesn’t have that much money, which fits uneasily with Wilf seeking out the Doctor in order to make her happy again, coming across as a little more materialistic than is usual in Doctor Who. Donna does get a happy ending (when we last see her she is absolutely ecstatic about finally tying the knot) which by its very nature of being happy can’t help but undercut the tragic departure the character had just a few stories ago. Where the departure really succeeds is for the characterization of the 10th Doctor and Wilf - that part is outstanding. But for Donna’s character itself, it doesn’t entirely work.

RTD had a habit of writing incredibly touching good-byes, then undercutting them. I’ll be interested to see what you have to say about Rose Tyler, the ne plus ultra of this habit: on the one hand, the painful and incomplete farewells of Doomsday, but on the other hand, being fobbed off with a real-live David Tennant sex toy as a ‘reward’ at the end of Journey’s End. (Well, slightly defective sex toy - he’s set to ‘genocide.’)

The “Donna won’t actually burn up, she’ll just faint” cop-out bothered me too.

But to be fair, she doesn’t actually remember the Doctor. We see flashbacks of other characters she met - Davros, the giant wasp, etc. - but the Doctor himself is not shown in her memories if I’m not mistaken.