What happens when events unfold before our eyes that defy our conscious understanding? Is it a dream? An hallucination? An optical illusion? What hidden truths would our subconscious mind perceive? The latest Myth Makers anthology is coming July, 2011

It all ends here…

A signal is being broadcast across all of time and space, and everything the Doctor has ever fought is coming to answer it. The Pandorica will open, and silence will fall…

In the latest issue: Issue 162 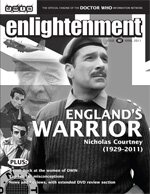