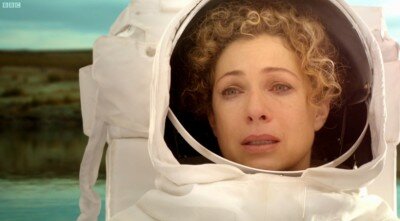 So, apparently, Steven Moffat had microphone shoved in his face at a party and was asked about his remarks in DWM where he bemoaned how some fans spoiling things. And the next thing you know they’re talking about it on the BBC Breakfast News on an item that includes other pundits from the land of Who (ok, DWM writer Benjamin Cook and his red hair). And then there’s a news item about it. And some people are calling it “Spoilergate” on Twitter.

I don’t mind spoilers, honestly. (Though it was nice to come to The Impossible Astronaut and not know what was about to happen!) But I spend half my life having to crack down on them. Especially when UK and North American broadcasts were weeks, sometimes months, behind. Last year, when Space was showing episodes three weeks after British broadcast, moderating the blog was a minor nightmare (the week Rory died when Cold Blood aired on the BBC made life particularly frustrating as Space was showing, I think, The Vampires of Venice). When I edited Enlightenment a couple of years ago I was left with the painful realization that Daleks vs. Cybermen was not going to be seen on CBC until eight months after broadcast in the UK.

Nowadays, we have the luxury of a lag of only a few hours or so between UK broadcast and North American broadcast, but Spoilers are still problematic. Why? Well, the opening two-parter was a big ‘event’ story and they decided to have public screenings of it. In North America, where some of the loudest, most enthusiastic Doctor Who fans in the world live.

On the one hand, I kind of get why Moffat is so grumpy. I think fans could learn to curb their need to talk about everything they see and to demonstrate some empathy that others might not want to know what’s happening, and be considerate for others to have the same degree of surprise.

On the other hand, I dunno: show a ginormous event episode in several theatres in NEW YORK CITY and yeah, people will post it to the internet. If you’re that worried, why not show Curse of the Black Spot instead? The fact is they wanted the buzz those episodes created. That’s what comes with the territory.

I really don’t have much sympathy. Russell T Davies showed Partners In Crime at a press screening without the scene where Rose shows up because he wanted it to be a surprise. If you want to have that level of control, then you don’t have advanced screenings for thousands of fans in two American cities with a loaded big frakking gun of surprise revelations. When this was pointed out, Steven Moffat on Twitter, said. “But it’s the fans who MAKE the screenings - helluva lot of people to punish for one idiot.”  Which I suppose is true—and the vast majority of people I know who went to New York kept surprisingly quiet about it through the lead-up to the first two episodes—but the issue still stands.

Anyway, if you want to avoid spoilers, Mags Halliday has some good advice. Now excuse me, I’m going to go live in a bunker until Saturday’s episode airs.

<< Further Than We've Ever Gone Before: US Morning TV

And there is quite the stir raging in the forums over this!

But if you listen to the actual broadcast piece, Moffat sounds like a half-aware zombie in the interview.  I suspect he probably overstated based purely on fatigue.

In some ways I see his point - he feels that surprise is one of his bag of tricks, and isn’t keen when someone takes his ball and goes home with it.  On the other hand, spoilers don’t dampen my enjoyment and sometimes they increase anticipation (known CE was leaving).

I don’t object to spoilers, but I do try to avoid them so I guess that I would rather that people didn’t blurt our future plot twists, etc., without warning.

I had no idea that we would see a child regenerate at the end of Episode 2, but I did know that one of the Tardis’ crew, would die and that (probably) it was the Doctor.

How did I know?

Well, from the BBC web-site, which told us weeks ahead, that someone important would be killed during The Impossible Astronaut; and which posted a picture heavily suggestive that it would be the the Doctor that would be left to push up daisies (or float off into Valhalla as it turned out).

I think Moffat is doing an incredibly good job, one which is also incredibly difficult. I sympathize with his frustration but he should recognize that in his and BBC’s efforts to spark interest in the show, they too have released a number of spoilers (which I suppose they might prefer to call teasers).

I think Moffat has back-tracked a bit on his blanket criticism, (http://twitter.com/#!/steven_moffat/statuses/68256606479065089) and will try my hardest to avoid any report on the Doctor’s Wife for another couple of days or so…

As I understand it, the issue is not people spoiling events once they’re broadcast, but the fact the BBC does us (and by “us” I mean both fans and those who write about the show) a favor by holding previews, circulating review copies etc. There is no obligation to do this - Doctor Who isn’t some unknown show that no one has heard of. Even in the US, having an advance screening was a bonus, but not really needed. Even providing screeners to reviewers is not really needed either.

The only thing Moffat and his team ask is that those who see the previews keep quiet about it (other than, of course, letting people know that it’s good - or not). But some have abused the privilege by giving too much away or ignoring the requests.

In that respect, I agree with him totally. Because what this could mean is fewer screenings in future, or if they do screen he may have to do what RTD did and show censored versions of episodes.

I also find that sometimes the attitude behind people who post spoilers is annoying. There’s a difference between, say, someone posting something out of excitement, or an enthusiastic cast member letting a few things slip (an interview Suranne Jones did with a blog a couple days ago had to have parts redacted by the site because she gave a few too many things away), and someone doing it out of a “don’t care” attitude. The two examples I give above could be seen as good faith. In fact, I think Jones might have been under the impression it had already aired - or that her interview would be read after. The Today Show had a spoiler from Episode 13, but apparently one bit of info that came out of the coverage of Moffat yesterday is that the BBC (or Moffat) had approved what was shown, and it really was no more than a teaser.

Bottom line, in my opinion, is the only people who should be upset by Moffat’s comments are those people who have done something to feel guilty about.

At the end of the day, shouldn’t it be left up to us to decide whether we’re going to go after spoilers or not? Surely though most of us (Canadian viewers) at the moment are quite happy to wait a few hours between the UK airing and our own airing, and we’re not trapsing the net to see what happens?

Personally, for me, it’s so much easier not to read too much. There may be a headline once in a while but I definitely don’t go looking for a play-by-play sypnopsis of each episode at 3PM on a Saturday. I think everyone’s different at spoilers: there’s people who love to know what’s going to happen next; some don’t actively look for spoilers, but if they stumble across something, they don’t really mind most of the time; and then there’s those who just want to be shocked/surprised all the time and get upset when they do read something. No one’s going to win all the time.
And surely sometimes, a spoiler is released just to increase the anticipation of getting someone else to watch the episode?

I mean, like (for those of us who know it) we’re not already trying to figure out who/what the next episode’s title refers to and how it will all come about?

Regarding Maruti SX4 - Would like to know if any one had installed Spoilers on front bumper / right around? The ground clearence - which i am worried about.
iPhone Release