DWIN > Doctor Who Blog > If the Next Doctor Were American…

If the Next Doctor Were American…

There isn’t anything quite like waiting for the announcement of the next Doctor.  The closest comparison Americans have is who will be the newest lead on one of our CSIs. We don’t have a cultural phenomenon in our country like Doctor Who is for England. Waiting on bated-breath for the announcement of a new TV show lead is as foreign to us as the accents spoken in Doctor Who.

There are a lot of factors that play into who the next Doctor will be, but the number one stipulation is, obviously, that he be British.  After all, this is a British show and it’s not like we hire British actors to play the leads in our weekly dramas (apologies to Hugh Laurie). But what if the Doctor were American?  What if the popularity of the show across the pond prompted Steven Moffat to go outside the (blue telephone) box and make the Doctor an American? Who would be the best fit?  Let’s first look at the factors that make the Doctor the Doctor.

The Doctor has to have the “good guy” look: No beady rat-eyes, no witch nose and no shifty smile.  I know this is a possible point of contention since this pretty much just says “make him good-looking,” but there is more to a good guy look than attraction. He should have a calm demeanor about him. This might be a nice smile, kind eyes, or a soothing voice. Classic doctors gave off a wise, Sherlock Holmes presence. Modern Doctors have embraced the “stylish outsider” look, while still maintaining the look of a good guy.

The Doctor has to be able to rock a fashion item: Speaking of the “stylish outsider look,” the BBC dissected the Doctor’s clothing choices in a manner highlighting the pros and cons to each piece. However, what the American Doctor would need is a fashion item that would stand out as much as his heritage.  Bowties and sweater vests have been done, but what hasn’t been done is a headpiece. He shouldn’t don a backwards baseball cap, but a classic derby hat, or maybe a driving cap would pair well with previous Doctor’s fashion choices.

The Doctor needs be someone you would want to follow: More than his companion, the Doctor needs to be able to make an impression on the people (aliens?) he meets in each episode.  The doctor must be assertive enough to lead everyone through the perils of time and space, but also approachable enough that his presence doesn’t strike fear in the hearts of the universe.

No Ultra-famous picks: David Tennant and Matt Smith had enough previous acting jobs to merit the title of Doctor, but they were not big-name talents. It would be easy to cast Tom Hanks, Brad Pitt, or Leonardo DiCaprio in the role, as they are well-established actors. However, the idea of them as the next Doctor doesn’t fit with recent choices. No trendy picks either.  This means the go-to geek stars are out. No Neil Patrick Harris, no Wil Wheaton and no Jim Parsons.  If they are currently a geeky or pop culture star on TV, they are out as well.

Make him the right age: Averaging the last five Doctors ages (27, 34, 41, 36, 44) comes to 36.4. Taking out the astoundingly young Matt Smith (the youngest Doctor ever at 27) and the average is almost 39. Being young doesn’t preclude someone from being the Doctor, but traditionally an age of over 35 is the norm. The doctor is someone that needs to lead. Just as there are few military generals under the age of 40, the Doctor can’t be too young either.

So after debating these topics I have come to my conclusion.

The first American Doctor is: 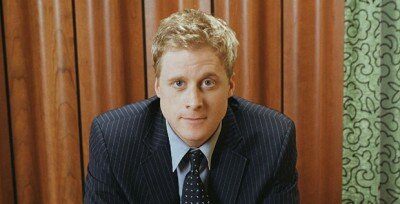 Alan has some recognizable roles on his resume without being in the “too big” category. At 42 he falls perfectly in range with the average age of Doctors. Reviewing his television and movie work, there is a boyish charm in his actions and smile, giving him the “good guy” look. He would also break another Doctor tradition by being the first Doctor with red hair.

Tudyk is probably best known for his role in the Firefly series. Further enhancing this choice, it shows that he can carry a sci-fi franchise on his shoulders, which any Doctor needs to do. And since Firefly was a Joss Whedon show, it also proves that Alan can handle the wit, comedy and occasional action the Doctor must have.

It would be an interesting twist if the BBC ever decided to have a non-British Doctor.  There would be a lot of arguments on both sides, but if Steven Moffat deviated from tradition, Alan Tudyk is the best choice.

Find out the next Doctor LIVE in the UK, US and Canada! >>

So Alan Tudyk having been on “Firefly” doesn’t already rule him out as a geek icon?

Being a geek favorite is what happens *after* being cast as a popular character, not before. Being linked to one geek character tends to make one typecast anyway, linking your face and voice forever to that one part in the eyes of fans - I once knew somebody who said her problem with Enterprise was that it was distracting to have Sam Beckett as the captain - so I don’t know why fans would even assume for a minute that casting someone like, say, Simon Pegg or Benedict Cumberbatch would be a good idea.

No one ever seems to notice that iconic geek roles such as the Doctor almost never go to someone who’s already a fan favorite. These roles go to baggage-free unknowns who’ve only done “proper” dramas, or people with crossover credibility with regular viewers. (Christopher Eccleston was cast because he lent mainstream credibility to the show, not because genre fans recognized him from 28 Days Later.)

Also someone affordable. I can’t believe anyone seriously believes that the likes of Brad Pitt or Johnny Depp would be seriously considered even if a North American actor was remotely likely to get the part. The BBC can barely make 13 episodes a year as it is.

Despite knowing that it won’t happen, for all the reasons given above, I think Zachary Levi would be a lot of fun as the Doctor.

I remember when I didn’t know about Doctor who and my friends did, I was missing out. Love the article. Here is a website related to doctors
Thanks for the article

And about the red hair thing yeah, I’ve never seen a doctor with red hair.
findrhinoplastymiami.com