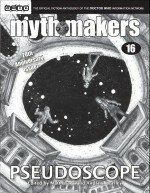 What happens when events unfold before our eyes that defy our conscious understanding? Is it a dream? An hallucination? An optical illusion? What hidden truths would our subconscious mind perceive?

Myth Makers 16: Pseudoscope features stories written around the theme of altered perception. In making sense of these distorted realities, the Doctor, his companions and his enemies make new discoveries about the world outside - and within.

Pirates and Dinosaurs by David N. Smith & Violet Addison (Re:Collections - The Best of Short Trips, Faction Paradox: A Romance in Twelve Parts)
On a remote and beautiful island, Amy and Rory are making one final attempt at having an enjoyable honeymoon. Unfortunately, there’s a clawed footprint on the beach and a ship full of pirates just over the horizon…

Vivisection in G Minor by J.F. Keeping (Myth Makers Presents: The Fires of Prometheus)
Carrie Lindemeyer is an ambitious young programmer whose dreams are haunted by silver giants and the taste of metal. When she starts seeing an odd psychiatrist known only as “The Doctor,” she begins to suspect her dreams are more than just dreams – and that this Doctor knows more than he is telling her.

No Good Deed… by Stephen Hatcher (Short Trips: Indefinable Magic, Myth Makers 15)
Reputations are hard won and even harder to lose. When the most evil criminal mastermind in the universe decides to turn over a new leaf, even the Doctor finds it difficult to accept that he is sincere.

The Man in the Suit by Dale Smith(Heritage, The Many Hands)
The Doctor and Sarah Jane are invited to observe an experiment to prove once and for all that there are alternate universes to this one. But the walls between realities are thin, and the man in the suit is waiting patiently.

Breath of Echoes by J.R. Loflin(Short Trips: How the Doctor Changed My Life)
A haunted planet, a mysterious weapon, and an “antiques” dealer out to make a name for himself in the murky and morally questionable world of arms dealing - Jenny hadn’t known what to expect after leaving Messaline, but this certainly wasn’t it. Still, a job was a job, and her broken-down ship wasn’t going to repair itself…

Centrepoint by Richard Salter (Short Trips: Transmissions, Iris Wildthyme: Iris: Abroad)
All is not what it seems on the planet Garden. While the Doctor is fascinated by a holographic planet in the local science museum, Anji sees a ghost and Fitz discovers he can fly. Why can’t the TARDIS leave? Which reality is the real one? And where is the Centrepoint? Perhaps the little boy with the blue blanket has the answers.

The Growing Shadow by Chris Heffernan (Myth Makers 15)
An ancient entity stirs in the shadows. Mishaps plague the set of a popular British television show. Someone is kidnapped. And the police come to the rescue. Starring Sylvester McCoy and Sophie Aldred.

Oyun by Mike Amberry (Short Trips: Indefinable Magic, Short Trips: How the Doctor Changed My Life)
An old shaman is troubled by the spirits of his past. The Ninth Doctor investigates whether everything in deepest Siberia is quite as it seems.

<< Myth Makers 15: Across the Universe