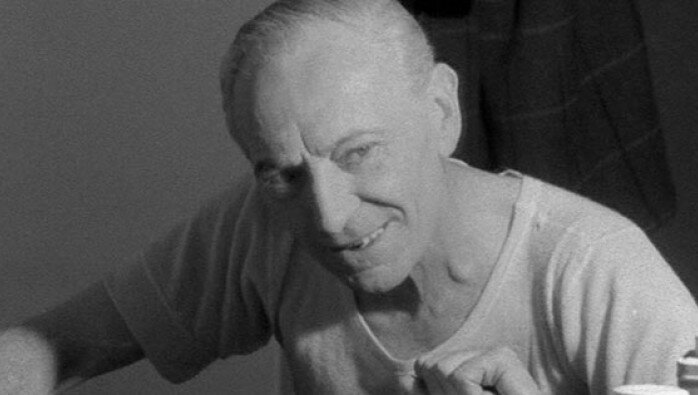 For years, moreso from word or mouth than printed reviews, fans had heard the refrain - mainly from critics of William Hartnell - that his Doctor was basically the actor playing himself in the scripts - irascible, absent-minded professor, prone to gaffes, irritable, grand-fatherly but bad-tempered. It was even claimed that some of the scripted gaffes (where the Doctor gets Ian’s last name wrong) were not actually scripted. This view of Hartnell’s performance took somewhat of a beating when the soundtrack to The Massacre was released on CD for public purchase in 1999. At that point fans far and wide could hear for themselves the very different role that Hartnell plays in the story, that of the Abbot of Amboise. It should have proved to people Hartnell was a good actor who simply chose to perform the Doctor the way he did because it suited the character he was helping to create with his performance - however the view that he was essentially playing himself on screen persisted in certain quarters.

However, it was arguably the discovery and release in the past few years of two interviews with William Hartnell taken from the 1960’s which pretty much nailed the coffin lid shut on this fan myth. First there was the only known-to-still-exist video interview with Hartnell after (or even during) his time on Doctor Who which was released on The Tenth Planet DVD in 2013. Now, you can certainly argue that Hartnell sounded irritable in the interview, but that argument has to be countered by pointing out that just about any actor would have found those (in some cases insulting) questions posed to him (or her) as being very irritating, particularly in a dressing room. The main thing that strikes the viewer is just how different Hartnell’s mannerisms and vocal patterns are - he sounds much gruffer here when he is legitimately irritated than when he plays irritation as the Doctor. Gone is any trace of sounding or acting like a professor or a learned man of science. That’s clearly an act, as it should be given that this is required as part of the role.

Perhaps more startling is the 2nd Hartnell interview to be discovered, which dates from about a year and a half earlier, in 1965 when he is still playing the role. This interview is from an episode of Desert Island Discs, a popular radio programme where celebrities pick what records they would choose to have if they were stuck on a desert island. The first time I heard this I had to re-check the link about three times to make sure it was the correct one. It just didn’t sound like Hartnell at all - or at least, the version of Hartnell that I was familiar with, which was, for decades, the 1st Doctor. He sounds so incredibly different that it took me some time to realize it was the same man I’d been watching and listening to episodes of since the mid 1980’s.There’s no trace whatsoever of his first Doctor character in this interview, of which we hear far more of his speaking voice (and in much less-trying circumstances) than we do in the film interview that is on The Tenth Planet DVD. Even more than the other interview and his performance in other roles, this interview demonstrates that his first Doctor was a character he created and wasn’t merely an extension of himself.

For those that haven’t heard it (and we’ve posted a link to this before on this blog but frankly it’s worth a re-listen), you can find the clip on youtube here.

Is this an actual fan myth? Personally, in 40 years of being a Who fanatic, I’ve never heard this said.

As mentioned, its not as commonly stated in reviews or articles as Fan Myth #1 was (and in fact, I don’t think it was anywhere close to being a commonly-held view as #1 was), but I have seen it suggested a few times and much moreso I have heard it suggested in personal discussions a number of times over the past couple of decades or so. There’s an article about the discovery of the film interview contains a good quote from Richard Bignell (who discovered the film) which perhaps sums up what I’m talking about better. Unfortunately it seems I’m now allowed to link to articles in the comments section but the quote is:

“Because we’re very used to [Hartnell’s] very fluffy bumbly first Doctor character, I think that there’s a tendency to think that perhaps that’s what Bill was like”.

I agree with Richard on this because I’ve heard this kind of refrain regularly enough in casual conversations over the years.

I should probably take this opportunity to add that this list isn’t meant to be the top 5 most frequently repeated or most commonly believed fan myths, but simply 5 items that I think are fan myths to which we now have more evidence with which to conclude that they are myths. I realize that you weren’t suggesting I was doing the former, but I thought I might as well clarify that lest anyone thinks that might be the case. #2 on this list is mainly on here because of the new info that has come to light over the past couple of years.

I should add, the article was published by The Guardian in 2013 at the time that the interview was released on DVD.

In that Desert Island Discs interview, Hartnell sounds much more posh, perhaps because back then UK actors were encouraged to lose their regional accents and sound RP.

So I suspect that the dressing-room interview, despite (or because of?) its stressful circumstances, actually captures more of Hartnell’s natural speaking voice.

Maybe a more lateral way to judge Hartnell’s performance as the Doctor is to listen to The Savages and guest star Frederick Jaeger’s performance as a character who gets possessed by the First Doctor’s life energy and starts talking like him.

Obviously Jaeger was able to observe first-hand the difference between Hartnell’s speaking habits as himself and as the Doctor, and this would likely have informed Jaeger’s efforts to recreate the performance. Jaeger doesn’t do so much of the giggling that we associate with the character, but what he does do is make his voice quite high-pitched and nervous-sounding, which is quite different from the gruff, short-tempered Hartnell we always hear anecdotes about.

In any case, it’s likely that Hartnell, like other non-posh actors of his generation, had a public voice that he put on that was very different from his normal speaking voice.

Come to think of it, a more basic reason for this fan myth is that most of us know Hartnell only from his performance as the First Doctor.

Not only where there no recordings of his natural voice, but most of Hartnell’s other acting work would have been (at least to non-UK fans in the post-Tom Baker years) either inaccessible, or in genres outside what a younger sci-fi audience might typically watch.

For a non-first Doctor role, check out Hartnell’s small part in ‘Odd Man Out’

Also, it’s a great film, so you won’t waste your time looking for Hartnell’s bar-tendering.

This piece of information is very useful for a person like me. However I stumbled upon these while searching for this topic and I feel that these might be of value to you as well.