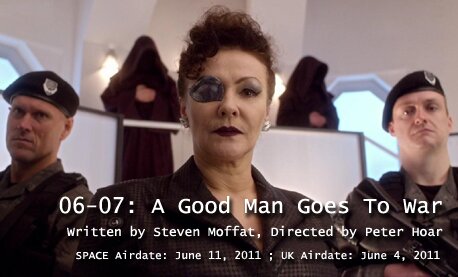 The Big Idea… A pregnant Amy has been kidnapped. The Doctor and Rory do whatever they can to find her and rescue her

Some quick bits of trivia: Madame Vashtra was played by Neve McIntosh who played both female Silurians that we saw in The Hungry Earth/Cold Blood. Similarly, Dan Starkey played Commander Strax, having previous played a Sontaran in The Sontaran Strategem while writer/actor Mark Gatiss did an un-credited voice-over cameo for “Danny Boy” (the spitfire pilot who was previously in Gatiss’s own script Victory of the Daleks)

Did You Notice…? River’s somewhat startled reaction at seeing Rory near the beginning of the episode? Also The Doctor awkwardly ducks the question of who’s crib that is, before eventually stating it was his. As most people don’t hang on to their own cribs, has someone else been in that crib between the Doctor and Melody (ie. River as a baby)?

Not To Complain But… the one trick that the production team missed in this episode was not having Richard Nixon as part of the army of the Doctor’s friends that come to rescue Amy. That would have been awesome!!

All Things Considered… A truly outstanding episode that actually delivers on everything that was promised. Not just in the promised revelation of River Song’s identity, but it also explores what happens when the Doctor gets angry, what does it take get him that angry in the first place, while at the same time providing a solid space-faring action adventure story. Along the way we are also provided with old and new great characters, wonderful mis-directions, explanations galore, major additions to the Time Lord mythology, genuine heart-breaking moments, scenes that make you laugh out loud, and an ending that only leaves us hungry for more – yet without a real clue as to where the story is going to go next. All this, and we haven’t even seen the second half of the story yet (although whether the next episode truly is a concluding installment or just the next installment in what is, more than even last year, a season-long story, remains to be seen).

Also remarkable for this day and age is that The Doctor doesn’t actually appear on screen for the first 20 minutes. His appearance, having hidden as a Headless Monk, is probably the least surprising thing about the whole episode. Prior to that we have several patented mis-directions by Steven Moffat. Amy’s speech to Melody about the last of his kind coming to save her and Melody seems tailor-made to describe the Doctor, but is not. Lorna Bucket (which usually contains water – aka “pond”) is introduced not just to provide the prayer leaf that would be significant later, but to get the viewer (the ones who have been following along and think they are clever – like me) thinking that this is in fact the little girl from The Impossible Astronaut who we last saw regenerate. It turns out that she’s not – she’s just a brave girl who wanted the chance to meet the Doctor again after he saved their people. And she dies in one of the most heartbreaking death scenes in the series history – sacrificing herself unselfishly to protect the new-born baby of the Doctor’s best friends – and the Doctor doesn’t even remember who she was (although good-naturedly pretends to do so in her last moments). It is this moment where the Doctor “falls” further than before, as he reflects on all of the people who have willingly sacrificed themselves for him – and it seems as though he feels like her death and that of many other innocents is on his hands.

The Doctor has much to regret. Jenny tells Amy that she can’t blame the Doctor when she backs away from him – but the Doctor does, quite atypically, get outwitted by the bad guys. And the possibility of the baby being a ganger should have occurred to him, but the moral of the story appears to be that the Doctor’s righteous anger causes him to make an atypical mistake

.Some may have guessed the identity of River Song by the time it was revealed – it was one of several possibilities speculated, but even with the aforementioned “Melody Pond” visual clue at the start of the episode, the red herring of Lorna Bucket was, I suspect enough to keep most viewers guessing until the end (River’s absence for most of the episode also helps the viewer to not think about the question as the action is going on). It creates one of the most interesting changes in dynamic in Doctor Who history. Previously in The Impossible Astronaut and Day of the Moon the dynamic between the four main characters was of “Mom & Dad” and “the Kids” – Mom and Dad being the Doctor and River as the two oldest and most experienced characters, and the kids being Amy and Rory. Now with Amy and Rory learning the truth, the dynamic will likely be completely different (although the issue of age and experience will likely remain) – Amy and Rory are the actual parents, River is their daughter and the Doctor is the one going out with their “baby”.

This is what is “game-changing” about this cliffhanger (which thankfully, turned out not to be a “jeopardy” cliffhanger which threatens to or actually kills someone off – as frankly, we’ve seen every one of the four main characters killed-off already, it would be difficult to justify the use of that term). It is likely more “game-changing” for Amy and Rory than anyone else. It is difficult to think of what they must be going through and how they will take this news going forward. For one thing, they only find out that they were going to be for a lot less time before the birth of their baby that most (all?) human couple’s do. And nobody has ever discovered that a long-time friend and mentor who is physically twice their age is in fact their own offspring – because such a reality is only possible through the sci-fi device of time travel. This puts the nub on the strength of Moffat’s Who – although it is about characters as much as any other era of the show, it is also primarily concerned with exploiting and investigating science-fiction ideas and how it relates to those characters. It reminds us, once and hopefully for all, that Doctor Who is indeed a science-fiction series (no matter how much some fans strangely want to deny or disassociate the show with that term nowadays).

Line of the Week: “Would you like me to repeat the question?”