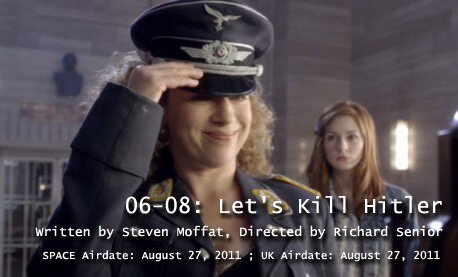 The Big Idea…  A pretty girl hijacks the TARDIS crew in the middle of a specially-written crop circle in a wheatfield and forces them to take her back in time to kill Hitler. And it just gets crazier from there.

Some quick bits of trivia: Caitlin Blackwood, who plays Amelia Pond for the third time, is the real-life cousin of Karen Gillan. The opening scenes in the cornfield were actually the last shot for the current season, on July 11, 2011. The scenes for the German dinner party were filmed at The Temple of Peace in Cardiff. This location, a Cardiff civic landmark, has been used in The End of the World , Gridlock, The Fires of Pompeii and Cold Blood (along with Sherlock´s The Blind Banker). With its familiar amber coloured marble, the Temple of Peace, is something like the Willhelm Scream in movies: once you recognize it, you forever notice it. (That said, this is the first time we’ve seen the Temple of Peace used as an exterior location)

Not To Complain But… Why should the Doctor care that Amy never said that he was “hot”? Seems unusually vain for a character not normally interested in being seen that way.

All Things Considered: A bizarre, mad episode that doesn’t go in any of the directions one might expect from it’s first part, A Good Man Goes to War yet still continues the story all the same, answering a lot of questions and posing a few new ones, and has a whole load of fun along the way.

It was perhaps wise for Moffat to avoid spending time on another “Have I the right?” scene of moralizing on the part of the Doctor (as to whether they’d be in the right to kill Hitler) because frankly, “Have I the Right?” has been done before in Doctor Who, (along with a number of variations of it). Given the title, one could be forgiven for expecting that this is what the episode would be about.

However it turns out to be a bit more subtle than that. For the brainwashed Melody Pond, killing the Doctor is the same as killing Hitler, and the episode is actually about what the Doctor has to do to prove to Melody that he is not the evil person that her brainwashers claim he is and in the process begin to unravel the brainwashing process.

Added to this we have a time-travelling Justice Vehicle who have also decided to kill Hitler and any other “unpunished” criminal that they happen to come across. The two plots mix, with the Doctor ultimately convincing River as to what he’s really like in part because he shows compassion for his companions –  and her parents - even though he knows he’s dying. Also in part because he is able to tell her how special the person she will be actually is. River’s actions – to sacrifice her future selves to save the Doctor she has poisoned – are very apt as a result, The true River Song is born (with the Doctor “fixing” the mistake he made from getting so angry in the previous episode in the process).

Thankfully this time there is a negative consequence to using the powers of regeneration to heal someone (this way we are not left wondering “Why don’t Time Lords just do that all the time?”)

A word on Melody Pond. Moffat presents us with a new character (or seemingly one) that has something suspicious about her, and seems like she is going to be someone who must have altered the timeline to become this long-time best friend of Amy and Rory that we’d never heard of before. Yet the character spending so much time in prisons is not only fitting for the River Song that we come to know, it also helps to explain why she wasn’t around in Leadworth at the time of either The Eleventh Hour and the end of The Big Bang. Casting a black actress for this role was a stroke of genius (whether it was Moffat’s idea or Casting Director Andy Prior) because after all this time we simply aren’t used to the idea of Time Lords changing racial features when regenerating (despite seeing it very briefly once before in Destiny of the Daleks), It also helped to distract the viewer from guessing who she might really have been. (On a separate note, given the ease and control which River is able to control the regeneration process, is it the fact she is half human that gives her this control or given Romana’s controlled regeneration in the aforementioned story, are girls just better at this sort of thing than boys? One for the fans to ponder).

In the previous TARDIS File I stated that “it is difficult to think of what they [Amy and Rory] must be going through and how they will take this news going forward”.  Now it’s pretty much impossible to imagine what they must be going through and anyone who tells you otherwise is not speaking from a position of authority (unless his name is Steven Moffat, since these are his characters). Amy and Rory have not only discovered that they have a “surprise” baby (rather than having nine months of expecting its arrival and planning for it), but find out that their baby actually is their old friend River Song and so turns out to be okay (even though she has been kidnapped), and then they also find out that their long time best friend “Mels”is also their old friend River Song – and in consequence, is also their baby who they unwittingly got to see grow up after all and whom they know turns out to be safe and well. It is true that not much time is spent in showing how they react to all this news, other than abject shock, which may disappoint some who like to have the series spend more time dwelling on emotions.

Others may complain that Melody Pond could have killed the Doctor instantly with the gun she was given and ask why she did not. Both the reason why a gun wasn’t used and why she didn’t do so immediately but wanted to have some fun first (because she’s psycho) are stated clearly in the episode. It is also apparent that the poison lipstick she applied was specially engineered to inhibit regeneration (something that a gun presumably would not be able to do).

Such a bizarre, off-beat, comedic-yet-serious episode is not going to be to everyone’s tastes, and nor is the fact that the episode is very part of a season-long story (itself continuing from a “first chapter” of last season) rather than a series of self-contained largely unrelated stories (as the classic series often was). These are the “risks” that come with experimentation. Without the ability to experiment however Doctor Who (and one might argue, all forms of art) is ultimately doomed. And, as an example of a unique, weird, memorable episode of Doctor Who that has the show doing what no other show can do, it doesn’t get much better than this.