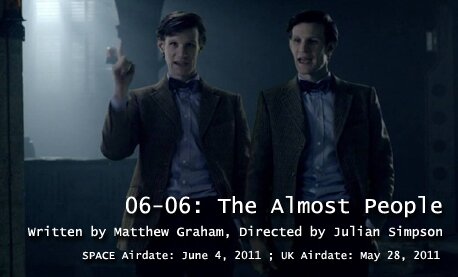 Some Quick Bits of Trivia: In addition to the quick bits from last week, Raquel Cassidy (Foreman Cleaves) has also appeared in Party Animals with Matt Smith (as Smith’s character’s boss), and provided a voice for the Big Finish audio “The Judgement of Isskar”.

Did You Notice…? Finally, we get an explanation for the eyepatch woman who’s been popping up throughout the series and for Amy’s yes/not-yes pregnancy. Amy really is pregnant elsewhere in space and time, and the Amy we’ve been seeing, probably since the season began, is a double made out of Flesh. But that’s only the obvious revelation: hidden away is the fact that Amy has now inadvertently revealed to the Doctor the secret she’s been keeping since The Impossible Astronaut, that his future self invited her to witness his death.

Not to Complain, But… How exactly did Ganger-Jennifer create a second Ganger of herself? And if she can feel the pain of each decommissioned Ganger so keenly that she’s willing to start a bloody worldwide war over it, then why create a double of herself that she intended to kill? While we’re at it, did anybody bother to tell the crew of the rescue shuttle that they could go away before the monastery exploded beneath them?

All Things Considered… If your reviewer had finished writing this TARDIS File on time, before he’d been able to sit back and really think about what had happened, the review would have been very different; because, let’s face it, the character througlines in this episode are pants. We’re given scenes that we can use to justify the changes in the characters, but none of them carry a real emotional punch. Cleaves is healed of her parietal clot, sees her own Ganger sacrifice herself and sees Ganger-Jimmy comforting his dying original; yet somehow we don’t really *feel* her change from the “kill ‘em all” position she holds at the start of this episode to her “side by side” attitude at the end. Likewise, we’re given reasons why Ganger-Jen has gone stark raving silly-putty, but it never *feels* entirely convincing. Last week, Rory had good reasons for empathising with her position; this week he falls for an obvious trick because she bats her eyelashes coquettishly at him. Surely the CGI budget for The Battle of the Jennifers should have been spent on the confrontation between the real original Jennifer and her Ganger, which would have given us real drama rather than a plot fake-out?

But if the episode didn’t completely fall apart, that’s because of the last two minutes. And not just because of the brain-boggling revelation about Amy (although that would probably have boggled your reviewer much more if he hadn’t earlier read a blog posting in which someone speculated about the end of the episode and got it spot-on correct, dammit). No, the real revelation is the fact that the Doctor knew, or suspected, the truth about Amy from the very beginning of “The Rebel Flesh,” and that isn’t just a wow-neato plot twist: it colours their entire interaction throughout this episode. Every time that Amy flinches from the Doctor she believes to be a Ganger, every time she puts him down and dogmatically insists that he’s not the real Doctor and never can be… every time she lets her prejudices out, the Doctor is watching, quietly judging.

There’s been some debate about why the Doctor “switches off” Amy’s Ganger after spending two whole episodes arguing that the Gangers have just as much right to live as their human counterparts. But it’s fairly obvious that this is a different situation: the other Gangers became autonomous individuals due to the Solar Gamma Flare of Magic, but Amy’s Ganger is still Flesh being remote-controlled by the original Amy, with little or no separate self-awareness. But the manner in which the Doctor breaks the news to her is almost cruel; necessary, but cold. She’s spent the episode insisting that the Gangers are not real, and he’s allowed her to do that—but now he’s going to make her accept the full consequences of taking that position.

The plot twist we’ve all been waiting for is a red herring; the real twist is what we learn about the Doctor’s character. He’s kind of scary, this Doctor. Makes you wonder.

Line of the Week: “I am and always will be the optimist, the hoper of far-flung hopes and dreamer of improbable dreams.”