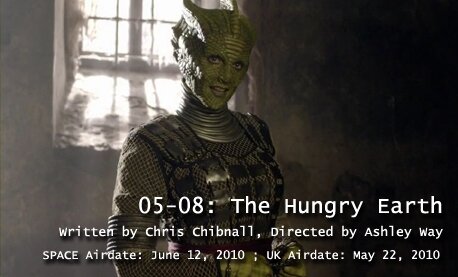 The Big Idea… The Doctor, Amy and Rory land in the year 2020 and visit a drilling project in the Welsh countryside. However, while the humans are drilling down, something else is drilling up.

Some quick bits of trivia…. this is Chris Chibnall’s second Doctor Who story, following the Series Three episode 42. The Siluarians are the sixth race of monsters from the “classic” series to be brought back since the show came back in 2005 (the others being the Daleks, the Cybermen, the Autons, the Sontarans and the Macra).

Did You Notice… As mentioned above, the story is set 10 years into Amy and Rory’s future, seemingly without any particular reason from what we can tell from this first episode. Hmmm…

Not To Complain But….. while fans can take the view that the re-use of ideas from previous Doctor Who stories is wonderful as a homage to a past era, it might also be an indictment that the author – who was a major Doctor Who fan in his youth – is unable to think up enough original ideas of his own (42 his other script for the show, is similarly afflicted with “re-use of ideas from old Who stories” syndrome).

All Things Considered….  With Amy captured early on and absent for much of the episode, we get our first chance to see Rory and the Doctor work together, in what is a strong storyline for the Doctor’s newest companion.  Rory gets a chance to investigate the mysterious goings on with the locals, and then takes a leadership role amongst the three humans left to look after Alaya. He is far more comfortable now as a time traveler after his first trip in the TARDIS when he was (amusingly) out of his depth.

The Doctor has some wonderful scenes with Elliott, reassuring him like a school teacher might for a student with a learning disability (Elliott has dyslexia) – perhaps appropriate since the Doctor is also dressed like a teacher. The line “No, they’re scared of me” in reference to the monsters is notably played in a different way – quieter, reflective, arguably less demonstratively – than his predecessor. This is not a criticism, just an observation of one of the many differences in Matt Smith’s portrayal.

The episode ends with two different types of Doctor Who cliffhangers rolled into one. The first is the traditional “jeopardy” cliffhanger where Amy is about to be “dissected” by a Silurian scientist, and the other is the less-frequently used “revelation” cliffhanger – a cliffhanger where something startling is discovered that will change the complexion of the story. In this case, it’s the revelation that it’s not just a small group of Silurians they are dealing with, but an entire civilization.

This episode reminds us of the strengths of the traditional 90-minute Doctor Who story. In a 45 minute story you simply don’t have the time or room available to build up the appearance of the monster or threat the way that it is done here. The suspenseful build-up makes the eventual appearance of the Silurians a powerful and dramatic one – and its really this build-up which is what this opening installment of the story is all about.

Line of the Week:  “I trust the Doctor with my life”