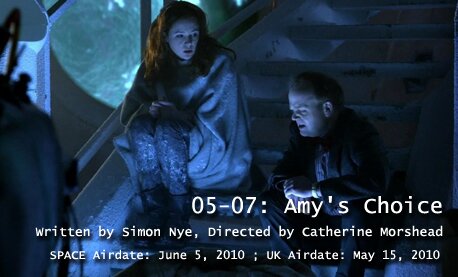 The Big Idea: The Doctor visits Rory and a very pregnant Amy five years in the future, but everything isn’t as it seems and a mysterious figure called the Dream Lord offers Amy a choice.

Some Quick Bits of Trivia: Simon Nye who penned the episode is probably best known as co-creator/writer of the popular 1990’s ITV/BBC situation comedy Men Behaving Badly.  Nick Hobbs, who who plays Mr Nainby previously played Aggedor in the third Doctor adventures The Curse of Peladon and The Monster of Peladon.

Not to Complain, But… The Doctor proclaiming that Amy and Rory have no darkness in them is a little trite, and belies Amy’s earlier action of driving herself, the Doctor and her unborn child into a wall (regardless of how distraught she is over Rory’s death it’s a rash and selfish decision). And while the plot device of having the Doctor, Amy and Rory collapsing into sleep is a necessary one, it wears out its welcome by the end of the episode.

All things considered: Exploring the Doctor’s dark side is tricky. Back before companion Barbara Wright humanized the first Doctor, William Hartnell played the role as decidedly prickly and anti-heroic. The Edge of Destruction used plot a device not unlike Amy’s Choice to delve a little further into that darkness. Over the years subsequent production teams have flirted with the Doctor’s shadow aspects through the sixth Doctor’s more alien side, the bizarre revelation in that same era that the Valeyard was in fact an amalgam of the Doctor’s darker side, through to the seventh Doctor’s puppet master persona and onto Russell T Davies’ exploration of a battle scarred Doctor culminating in what was probably the Doctor’s darkest onscreen moment at the end of The Waters of Mars.

The challenge is that most of the audience wants to see the Doctor acting heroic. Thus with rare exception an external factor has to be introduced into the narrative: in this case a little “exotic pollen” in the TARDIS gears and a loopy dream narrative, with the Dream Lord (perhaps not so subtly in retrospect) standing in for the Doctor. If one strips down Amy’s Choice to it’s a core, it’s a classic three hander psycho drama (much like the aforementioned The Edge of Destruction) with some fantasy setting elements stirred in for fun and diversion.

But of course the focus of the episode is Amy and probably the most important scenes for Karen Gillan come when she’s sitting with the Dream Lord trying to assert her importance to the Doctor, and later when she loses Rory and decides she doesn’t want to live in a world without him. It’s a complicated scenario and I think in the end it doesn’t come down to whether you think the denouement was logical, but whether you buy Gillan’s performance.

Does it work? Mostly yes, thanks to Simon Nye’s funny (albeit at times a bit sitcom-y) and well paced script. Yes, it feels like a familiar sci-fi/fantasy trope, but as ever with Doctor Who it’s the journey. And Arthur Darvill’s quiet desperation at having to compete with Amy’s new world, and the sadness with which he holds onto to his quiet village life is very poignant and affecting. The Doctor is essentially travelling with two people in love and if you look closely it’s very interesting.

Ultimately the episode will probably disappoint those fans who are waiting for the plot to pay off with some mind bending twist, but there are subtler pleasures for those who find their Who quirkier little places.

Lines of the Week:   “Ohhh my boys… my poncho boys… If we’re going to die, let’s die looking like a Peruvian folk band.”