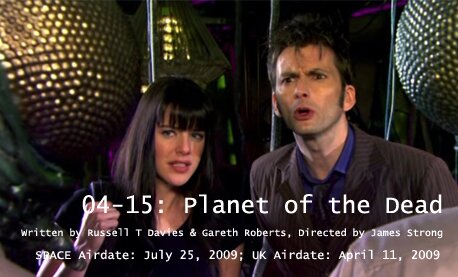 The Big Idea…  The Doctor takes a bus in London which ends up driving through a wormhole and onto another planet. The monsters that created the wormhole are on their way…

Some quick bits of trivia… This is the first, and to date only, Doctor Who story to be filmed on the continent of Asia, and in the Middle East in particular. The scenes on the desert planet San Helios were filmed in Dubai in the United Arab Emirates. The story features the second appearance of Captain Erisa Magambo (the first was in the parallel universe where the Doctor was dead in Turn Left). To date, not counting companions (ie. Martha) she is the only member of UNIT to appear in more than one new series story.

Did You Notice…? Carmen, one of the passengers on the bus, delivers the Doctor the prophesy, “He will knock four times” suggesting his end is imminent. Carmen also reiterates the previous prophecy that his “song will end soon”, delivered the year before by the Ood in Planet of the Ood.

Not To Complain But… the moments before the bus drives through the wormhole are somewhat puzzling – it is not really clear why the Bus Driver doesn’t pull over when he (surely) sees and hears police sirens chasing the bus for quite some time. It’s a small scene but with large consequences (the story doesn’t happen if the driver simply pulls over as one would expect him to) which should have been handled more clearly.

All Things Considered… this is probably the least special of the “specials” from this season of Doctor Who. The story is a fun, fairly inoffensive romp, but doesn’t distinguish itself greatly other than with its main guest stars. This is a deliberate choice in some respects – it’s the last chance for the Tenth Doctor to have some fun prior to the bleak and dark adventures that will end his tenure.

Although Michelle Ryan is the billed top guest star, it’s really Lee Evans as Dr. Malcolm Taylor who steals the show. Faced with a difficult role – a character who virtually worships the Doctor – Evans pulls it off without losing his dignity or without making it seem awkward. Instead it comes across as very sweet and highly enjoyable, and it is a shame that to date, this is the only story (featuring UNIT or otherwise) to feature UNIT’s current scientific advisor.

Michelle Ryan is also faced with a difficult challenge and does her best to make a frankly hard-to-believe-is-real character a believable one. She’s certainly the best choice for the role – not just a recognizable name, but she combines her ability to play “haughty” with the physical attributes necessary for such an athletic role. Ryan performed many of her own stunts, adding an extra layer of authenticity to her role. The character would, had she become a regular companion, have been a welcome contrast to the previous female companions featured in the new series – except perhaps for the fact that she is also made to “fall” for the Doctor, which puts her alongside Rose and Martha in that respect. Nevertheless, her relationship with the Doctor in this story adds an extra bit of fun to the proceedings.

The plot is easy enough to follow and exciting enough - where it can be criticized is the contrived manner by which it is initiated. The Doctor boards a huge double-decker bus which only has about six people on it – one of whom just happens to be a burglar escaping from a nearby museum and another happens to be a psychic, driven by a bus driver who for some reason decides not to stop when it is obvious that there are a whole bunch of police cars coming up on the bus in pursuit.

The best scenes are probably the most “alien” ones – a desert planet, crashed spaceship, weird humanoid aliens and some wonderfully voracious killer monsters. The scene where Lady Christina descends down the shaft of the spacecraft to retrieve the crystal is a memorable stunt, suitably enhanced by Murray Gold’s incidental music score (which stays incidental during this scene, thankfully).

It is unlikely that Planet of the Dead is ever going to go down as one of the all-time classics – the contrived beginning and the relative lack of ambition of the plot will see to that. But it is still an enjoyable romp, a final chance for one for David Tennant’s Doctor and a decent kick-off of the final story arc that will lead to his departure.

Line of the Week: “Well it didn’t do Mr. Watt any harm now did it?”