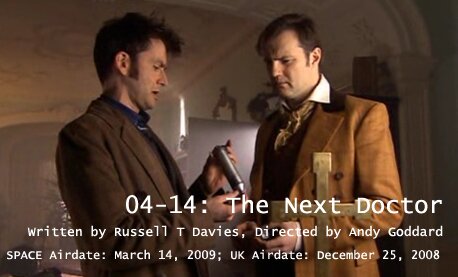 The Big Idea: The Doctor arrives in London, Christmas Eve 1851, to discover that a terrifying alien menace is already being dealt with by the “Doctor” and his companion Rosita, and their very own TARDIS…

David Morrissey (Jackson Lake) has co-starred alongside David Tennant before — in the 2004 murder mystery musical Blackpool. Similarly, Dervla Kirwan played David Tennant’s character’s mother in his other pre-Doctor Who starring role as Casanova. Jason Morell, who plays The Vicar, is the son of Andre Morell, famous for playing Professor Quatermass in the 1950s (and who also played Marshall Tavannes in the 1966 William Hartnell story The Massacre).

The set for the lair where the children labored to erect the Cyber King was, in fact, the set for the Torchwood Hub from Torchwood (also seen on Space) cunningly disguised!

Not to Complain But… The subsequent announcement of Matt Smith as the actual next Doctor gives the game away about the title character of the story before people will have even started watching its broadcast on Space. The idea of this story title was great for the initial UK broadcast, but that’s about it.

All Things Considered… The Next Doctor probably works best if you don’t go into it thinking that you really are going to be watching the next Doctor — the title is in fact an out and out lie, so those expecting that this would be a future incarnation may come away feeling unnecessarily cheated. Leaving that aside however, this is another enjoyable hour of Doctor Who, and it is a good move from writer Russell T. Davies to make it fairly obvious early on that this isn’t actually the next incarnation of the Doctor. This way story succeeds (particularly on repeated viewings) because of its real (and much more interesting) mystery - not of whether David Morrissey’s character is in fact a future Doctor, but rather the mystery of who is he and why does he believe he is the Doctor. Although the story isn’t really about the actual next Doctor, it is nevertheless about the character who thinks he is. This is what makes The Next Doctor a success.

Having said that, where this story perhaps succeeds most is in the use of the Cybermen, in arguably their finest use in the new series to date. Here we see them with a reassuringly traditional sense of purpose — simply to survive. Rather than simply invading Earth, we see the first glimpse of the cleverness of the Cybermen as they have a somewhat subtle (or at least, less than extremely obvious) plan to achieve their goal — an aspect of their character that we arguably haven’t seen since Earthshock. Best of all, giving the Cybermen a female leader which neatly contrasts their macho-male image is something of a stroke of genius that works so well its surprising that it has never been used before. It also seems a shame if it doesn’t get used again. Miss Hartigan is perhaps the best new villain the new series has created, with a host of wonderful memorable lines, an exquisite note-perfect performance by Dervla Kirwan providing a charm to her villainy that you can’t help but cheer for and some iconic imagery to top it all off.

One aspect that worked better than its pre-publicity photos (in which they looked somewhat dreadful) had suggested are the Cybershades — thankfully it is the speed of their movement which saves them as a new addition to the Cybermen lore in Doctor Who. Having said that, they are never properly explained and one gets the feeling that there weren’t all that essential. The most successful addition to the Cybermen mythos in this story is the Cyber King itself — a wonderful, rare slice of steampunk in Doctor Who and the realization of the type of idea that fans from the classic series days could only dream about seeing done looking remotely realistic.

The whole package is wrapped up with enough Christmas decorations (echoes of Charles Dickens reverberate throughout) to ensure the Christmassy feel that Russell T. Davies believes strongly in for all the Doctor Who Christmas specials made under his watch. The result is another fun present for Who fans to enjoy.

Line of the Week: “You can be quiet. I doubt he paid you to talk.”