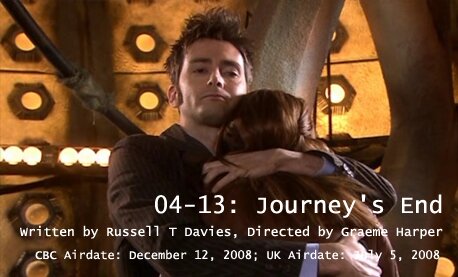 The Big Idea: The Doctor, Rose, Captain Jack, Sarah Jane, Mickey, Jackie, Donna and a duplicate Doctor fight to stop the Daleks and Davros from completing the universe-destroying Reality Bomb…b ut someone must be sacrificed

Cast of Characters: Continuing our list from last week…

Some Quick Bits of Trivia: The season was to end on another “What?” cliffhanger to the Christmas special like the past two seasons—this time with Doctor trying to figure out strange readings on the TARDIS console before two Cybermen come up from behind. The sequence was shot (and is included as a deleted scene on the DVD) but was cut at the suggestion of Doctor Who Magazine writer Benjamin Cook. Cook’s exchange of e-mails about this with Russell T Davies are included in their book Doctor Who: The Writer’s Tale. Also cut was an extension to the scene on Bad Wolf Bay where the Doctor gives his duplicate a piece of coral from the TARDIS console room to grow his own TARDIS. Speaking of cuts,when this story was originally broadcast on CBC in Canada, about 19 minutes was trimmed in order to make it fit in an hour timeslot with commercials (trust those who survived it when we say it was a butchery). Thankfully, SPACE’s repeats of the the story shows it uncut.

Not to Complain But… As delighted as we are to see Jackie again, her explanation that Pete, the head of that alternate universe’s version of Torchwood and a proven heroic figure, stayed behind to change the baby’s diapers is a bit…n aff. Okay, there’s real world factors like actor scheduling and such so we understand why Pete couldn’t be there; why not have him doing something heroic offscreen to stop the darkness from coming in his universe?

If the Daleks are keeping Davros on as an employee-cum-pet, why on earth would they leave controls with him that could immobilize and destroy every single Dalek in the crucible and the Dalek fleet? And would Dalek controls be that centralized (well… yeah…)

All Things Considered… After the epic set-up last week, did the pay-off work?

Of all of Russell T Davies’ finales, this feels the grandest. The stakes have never been higher. The drama has never been more heightened. The companions all do their bit to help but it ultimately serves to prove Davros’ point that traveling with the Doctor bears a cost to his companions. And while Donna ultimately saves the day, he sees Davros proven right once more.

There are flaws. The scene on the beach where the Doctor offers his human duplicate feels like offering Rose a consolation prize. You wish that the Doctor could have explained himself more; stated his responsibilities that would forever keep him and Rose apart, or allude to Donna’s imminent collapse, or…something more. What’s worse is that Rose does absolutely nothing in this episode except hang out with the Doctor and even that’s ineffectual because she doesn’t share any meaningful moments with him alone. It’s a season long build up for nothing.

Yes, there’s the from-left-field solution to everything with Donna becoming part Time Lord. And yet it’s so well built throughout the season—the DoctorDonna with the Ood; “Your song must end soon”; “What will you become?”—that it feels like everything was building to Donna’s emergence. And what those who criticize Russell T Davies for his alleged Deus Ex Machinations miss is that every time this happens there’s a massive cost: The Doctor has to regenerate in Parting of the Ways. The Doctor and Rose are separated in Doomsday. Everyone on the Valiant has to live with the memories of the year that never was in Last of the Time Lords. And here we have the most horrific cost ever shown: Donna forgets everything about the Doctor and in so doing everything she learned that made her a better person. It’s the most horrible fate for a companion ever.

And really, that’s what elevates The Stolen Earth and Journey’s End above an epic tale involving everyone versus the Daleks and Davros. Because this fourth season of Doctor Who achieved something considered impossible: it made us fall in love with Donna Noble, the shouty comic foil from The Runaway Bride. With every story, we saw how great the chemistry with Catherine Tate and David Tennant was, and we saw Donna transform from a mouthy annoying woman to someone with great passion and depth. Someone observant and thoughtful. Someone who not only saved the Doctor from himself but made him a better person. And an even bigger surprise was how wonderful Catherine Tate was as a dramatic actress. To see all this taken away is gut-wrenching in the extreme.

This is Russell T Davies’ swansong as writer and executive producer of Doctor Who. he’s coming back for a few encores in 2009 but this story is really the culmination of his tenure on Doctor Who, where he gives closure to all the characters and situations during his era. Some fans are so spiteful: they cannot see that without this man and everything he did we would not have Doctor Who today. And without his canny sense of what’s big and spectacular and funny and deeply emotional, Journey’s End would never have been the most watched Doctor Who story in Britain that week or indeed in 40 years. We look forward to the 2009 specials but we really bid farewell to the Russell T Davies era with this story. Thank you Russell. It was a wonderful ride.

Line of the Week: “I just want you to know, there are worlds out there. Safe in the sky because of her. That there are people living in the light, and singing songs of Donna Noble. A thousand, million light years away. They will never forget her, while she can never remember. But for one moment— one shining moment— she was the most important woman in the whole wide universe.”