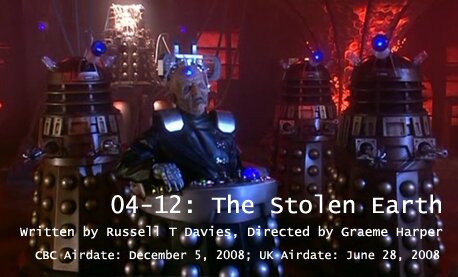 The Big Idea: Earth has gone missing from its point in space and the Doctor doesn’t know where. It’s up to his friends and former companions to find him—because the Daleks have invaded

Cast of Characters: We wouldn’t normally do this but because there’s so many important characters in this story, we thought the casual CBC viewer might like a scorecard:

Quick Bits of Trivia: It’s hard to believe given how many characters there are already present in this story, but Russell T Davies wanted even more in there. When the series was being sketched out, he suggested that Elton Pope (from Love & Monsters) could be there. The Shadow Proclamation was envisioned as an even bigger version of the Manchester Suite sequence from The End of the World with just about every alien race in the series encountered. Even at script stage, the regrown Margaret Slitheen (AKA Blon Fel-Fotch Pasameer-Day Slitheen) from series one was supposed to appear and they even had actress Annette Badland record her lines before the role was cut.

The idea of Wilfred paintballing the Dalek was Bernard Cribbins’, who previously faced the pepperpots in the 1966 film Daleks: Invasion Earth _ 2150 AD as a companion to Peter Cushing’s Dr. Who. As ever with the penultimate episode of the season, there’s celebrity cameos a-plenty in the form of scientist Richard Dawkins (husband of former Doctor Who companion Lalla Ward) and comedian Paul O_Grady.

Not to Complain But… If Rose is just transporting herself from the parallel universe where she lives technologically (like they were able to before the walls between universes were sealed in Doomsday) it makes her appearances in other stories this season problematic to say the least. Appearing on the TARDIS viewscreen is one thing, but on a screen in a bus in the far future in Midnight seems improbable. Worse, the whole ending of Turn Left becomes nonsense: how would she know that suddenly “Bad Wolf” would appear to the Doctor to replace any printed text on the planet Shan Shen including the TARDIS? (We’re going out on a limb here and suggesting that a) Rose did this back when she was a near-goddess and could see the whole of time and space in the finale to series one, b) the scene was impressionistic and merely suggests it’s as though the Doctor now sees “Bad Wolf” everywhere because he knew it meant the end of the universe or c) it was still a really cool ending so shut up.)

All Things Considered… It should be a grand mess and yet it it’s big and grand and epic. Even if you don’t know who everyone is or all the details, writer Russell T Davies makes the story work at the most basic level: the earth is gone, the Doctor and Donna go looking, people on the earth try to escape from the Daleks and find the Doctor, while the Daleks have enlisted their creator to nefarious ends. If you do know all the details it’s even better. But you don’t have to know.

It’s hard to judge this episode in isolation because it feels like a prelude to grand second act—something that establishes all the disparate characters and gives everything an epic scope. But there’s lots of great moments all the same: Gwen and Ianto pretending to the departing Jack that everything is alright when they know (and Jack doesn’t) that the Daleks are headed for the Hub; the Doctor’s freak-out when he sees Davros; Donna asserting herself with the Shadow Architect; Jack’s anguished cry, “Martha’s down”. Everyone calling the Doctor_

Graeme Harper’s direction sells the story, giving it the right look and feel of chaos and darkness. The scenes where Davros emerges are particularly stunning. And again, we can’t praise Julian Bleach’s portrayal of Davros enough.

And it ends on the most stunning cliffhanger ever. The real question is can we wait seven days to find out what happens next?